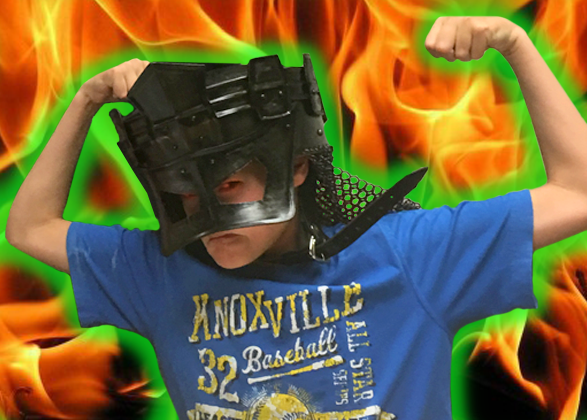 A lot of us running Dungeon Crawl Classics have been playing since its inception in 2012, and a few of us can even recall what gaming was like back in 1974. But some of our most fervent players were in kindergarten or preschool when DCC rolled out, and are only now coming of age as tabletop gamers. In preparation for this holiday season when family time is upon us, we spoke with Harley Stroh to see how he runs games for the next generation of reavers, cutthroats, warlocks, and heathen-slayers.

Goodman Games: Tell us about your gaming group and how it got started.

Harley Stroh: A few years back I started a local game with a friend and his boys. At the time the older boy was in sixth grade and his brother was a third grader. Word about the game got out, and we added a few more kids from school, and then another dad. That morphed into a monthly game held at the local library.

Our current group is two fathers and as many as eight kids, schedules permitting. Ages range from 10 to 42. We’re now in our second year of running public DCC games at the library.

GG: Did the players have any RPG experience before joining the group?

HS: We have one player who runs a 5th ed game for his friends, and the dads played AD&D back in the day. Otherwise, this was everyone’s first tabletop RPG.

Fortunately, the character tropes of D&D are so ubiquitous in video games that D&D-like RPGs are second nature to them. You don’t have to spend a lot of time explaining the strengths and weaknesses of the wizard, how to play a thief, or why the warrior has the most hit points.

GG: So why run games for kids? 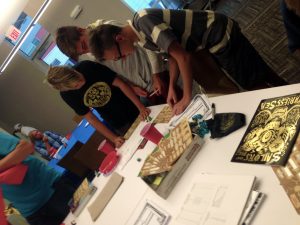 HS: It’s partly selfish: I’ve seldom been as surprised by players as when I’m running for kids. They’re not constrained by what a “D&D” game should be like, so they come up with insanely creative (and often improbable) solutions to challenges. Judging is most fun when the players keep us on our toes, and that is never more true than when gaming with kids.

The more important piece is the experience of freedom that RPGs have to offer. A contradiction of modern parenting is that we express love by giving our kids a lot of choices, but little actual freedom. As a kid you might have to choose between a dozen dozen breakfast cereals in the morning, but there is no way your parents are going to let you ride your bike home through the woods after school.

RPGs (especially tabletop) are one place where a kid can have total freedom. I take great pains to make sure each player gets to decide exactly what his or her PC wants to do. The dads don’t get to have a say, the other players don’t get to have a say. This is your PC, you get to make the choice. Nobody else is going to tell you what to do.

That sort of freedom is revelatory for a 10-year old. It’s what makes RPGs great.

GG: Surely sometimes that must backfire.

HS: All the time. A couple sessions ago the PCs split into three groups: two actively opposed to each other, and a third striking out through the wilderness. The session ended in a near-TPK, with only two PCs escaping alive.

But that also taught the players why they should never split the party. We rolled up new PCs and now everyone is highly motivated in working together to survive.

GG: That brings up the question of PC death. Do you ever fudge the dice rolls to spare a kid’s favorite PC?

HS: I was notorious fudger back in the day. Chris Doyle once called me out at a Gen Con play test. But I had a conversion experience with DCC, and now all the dice are rolled out on the table, all the time.

That session where we had the near-TPK? I didn’t roll a single die. I had the players rolling all the monster attacks and damages.

GG: Because you were afraid you’d fudge the roll?

HS: No, to keep the other players in the game. Remember they had split into three parties. I designated players to take the role of the monsters any time their PC wasn’t present. It’s always awesome when a kid kills his father’s character.

HS: When bad choices intersect bad dice rolls, it happens. My players haven’t ever seen me hide dice rolls, so they know I’m not cheating for them. It’s all on the dice. And by that same token, when that same PC crushes a nemesis, you can hear the kids cheering throughout the entire library.

Someone much smarter than me once observed that PC death isn’t a punishment; it’s being denied the chance to play after your PC dies. And this is what makes so many OSR games so great: a player can be back in the game in minutes.

Which isn’t to say that the kids aren’t attached to their characters. Everyone is on pins and needles for every check to recover the body. But in terms of taking a PC death and getting back in the game, I’d pit these kids against any crew of grognards.

GG: So what is different at the table when you are running games for kids?

HS: Probably the most tangible difference is making absolutely certain that each player has the chance to speak. My players get pretty excited; in the heat of the moment they can’t help shouting each other down. Sometimes I continue with the initiative count, even outside of combat, just so that every player gets to have his or her say.

GG: But what about the violence and gore? 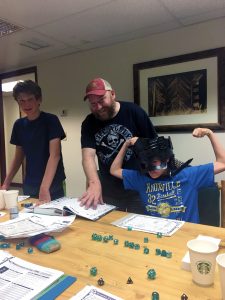 HS: There is the impulse in a lot of us adults to soften the content. But after seeing kids late-night at Doug Kon, judging games for children at Gary Con, and now running the library group has caused me to re-examine my assumptions.

I still err on the side of the soft lens, but there is something starkly different between seeing a violent act, and imagining that same thing. I’d never let a kid watch a YouTube video where someone’s head gets chopped off, but my players are constantly trying to stab, smash, burn and decapitate their foes.

It’s akin to how we’ve diluted the Brother’s Grimm tales: is that for the benefit of the children or so that we, the adults in their lives, get to feel like we’ve protected them? There is a reason so many fairytales begin with a child being abandoned or orphaned by their parents. That danger is the impetus for the adventure. And so long as the PCs have a chance to confront the danger and vanquish the darkness, any lesson is in the courage, not the threat.

Kids know there are real dragons out in the world. RPGs give them the power to fight back.

But no one should take my word for it. Every judge should feel out the boundaries for his or her own group. Just don’t be surprised if the kids are more resilient than we think.

GG: Speaking of surprise, what has been your biggest surprise while running games for kids?

HS: I knew the kids would love playing, but I was worried what the parents would think. Imagine some 40-year old overweight neckbeard wants to run a “fantasy roleplaying game” for your sixth grade son or daughter. Now hear that pitch through the lens of an adult who only knows D&D from the Satanic Panic in the 80s.

It turns out I was completely wrong — all the parents have been been awesome. We have kids skipping football and baseball practice to play DCC, with their parents’ blessing. This last session a mom made a special trip back home because her son had forgotten his character sheet.

HS: The legend of Sea Bro is too long to recap here, but you can find it on G+ in the DCC group. More recently we were in the midst of a battle and one of the PCs drops. His companion abandons the fight to loot his buddy’s corpse, to the howls of the other players whose PCs are getting slaughtered. A 40-year old dad pleading with his son to wait until after the battle before looting is priceless.

GG: What’s been the biggest mistake you’ve made?

HS: This last session I was running the first half of Doom of the Savage Kings. The PCs believed they had defeated the Hound and returned to Hirot as saviors. I went full Ren Faire with the villagers’ celebration: sloshing cups of wine, hunks of meat on spits dripping with fat, pigs roasting on the embers, the whole deal.

Then one of the players speaks up: he’s a vegetarian.

So we it flipped to carrots and potatoes on spits, but that wasn’t quite the Conan-level carousing I was aiming for.

HS: Seed the table with a couple experienced players that can help the newer players sort out their character sheet and model what it means to role play. Color the high number face of each die with a sharpie so the dice are easy to sort out. (Thank you Dyson Logos!) Use the Purple Sorcerer Grimoire generator to print out spell sheets, so that each player has his or her own spellbook to reference.

Otherwise, just have fun. Sit back and turn the kids loose.

Tell us what you found!