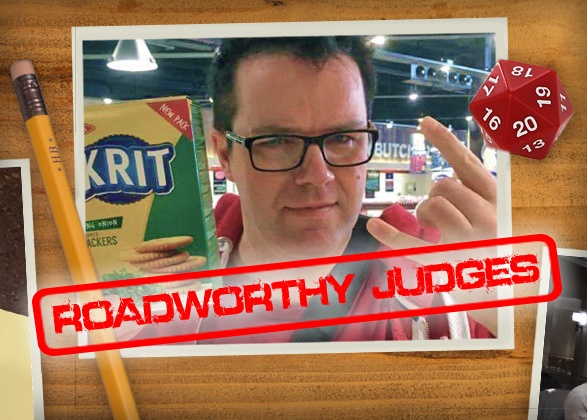 We go back to the UK for today’s Roadworthy Judge! With a strong sense of humor and style, he isn’t shy with advice or with taking part in a game. We present Judge Lee Neilson! 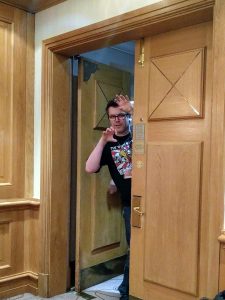 Hi, Crawlers! I’m Lee and I’m from the Warwickshire town of Kenilworth, in the heart of England. I would describe myself as lethal to peasant-folk and adventurers across the multiverse.

I’ve been a fan of Dungeon Crawl Classics since the days of the D&D modules, in fact, Aereth was the default setting for my D&D 3.5 games. I was immediately captured by their old school vibe the first time I saw them on a shelf and I quickly plundered my local and online gaming stores to grab as many of them as I could. My first encounter with the funky dice was running Harley Stroh’s The Sinister Secret of Whiterock.

As soon as I learned that DCC was becoming a game in its own right, I pre-ordered it at the earliest opportunity and picked up both versions of the original book. We’ve been together ever since!

As I write this, I’m running game #12 this Saturday (22 September, 2018) at a new local con called The Owlbear and the Wizard’s Staff [see our post about it!] in Leamington Spa, where I’m offering Not in Kansas Anymore.

Running the funnel version of DCC #79: Frozen in Time to a packed table of 12 players at Shadow Games in Rugby was a real highlight for me, it certainly tested my pacing skills and is a personal record for the largest gaming group that I’ve judged for.

Having Brendan LaSalle over for the first time to attend UK Games Expo this year was really special too, a fantastic time was had by all the DCC crew! Let’s make it a regular fixture, guys?

You can find me at Escape Games in Coventry on the first Tuesday of every month between 7pm-10pm. If you’re in the vicinity, come along and join in the fun!

Sadly, Shadow Games, the store I’ve represented Goodman Games at for the past few years, closed recently but the team are still running D6Con at The Rugby Hotel in Rugby, which returns for its second year on Saturday 13, October. I’ll be there with two slices of DCC action: Fae Hard and The Balance Blade.

Don’t get hung up on the details and just go with the flow. Read through any module you’re running once or twice so that you know what could happen but just let it all unfold in play. Encourage the role-play elements, the beauty of DCC is the simple mechanics that are only limited by the imagination, whether it be occupation based skill checks, Mighty Deeds or what a character does when they spellburn. 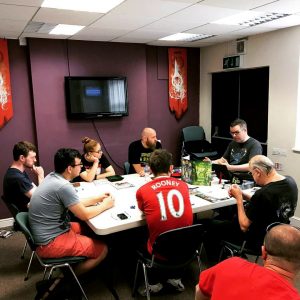 Embrace the weirdness but play it straight, let the dice fall as they may, let the bodies hit the floor and don’t feel guilty about it. If you find yourself stuck on a ruling then use the die chain or a Luck check to move on, these are your friends.

Don’t be afraid to ham it up, come up with voices for your NPC’s and monsters and stalk around the table to mimic their movements and help add another dimension to what the players are experiencing.

Take advantage of ordering the Quick Start Rules which are now available to give out for free to your players. At the same time, teach through play and explain things as they come up or as a player has an idea they want to try out.

If you get chance, try and get to play as a PC sometimes as well and experience other Judge’s styles. Be a magpie and steal from what inspires you to help bring your best game to the table.

And get to work on your Judge’s Vest…no self-respecting peasant-slayer should be without one!

What is your most hard-core DCC moment, in or out of a game?

I once had a near TPK in the Serpent Mound whilst running DCC #66.5: Doom of the Savage Kings. The few survivors returned to Hirot, whilst the players rolled up reinforcements. Upon their return to the dungeon, I had them face off against the reanimated corpses of their own dead characters! 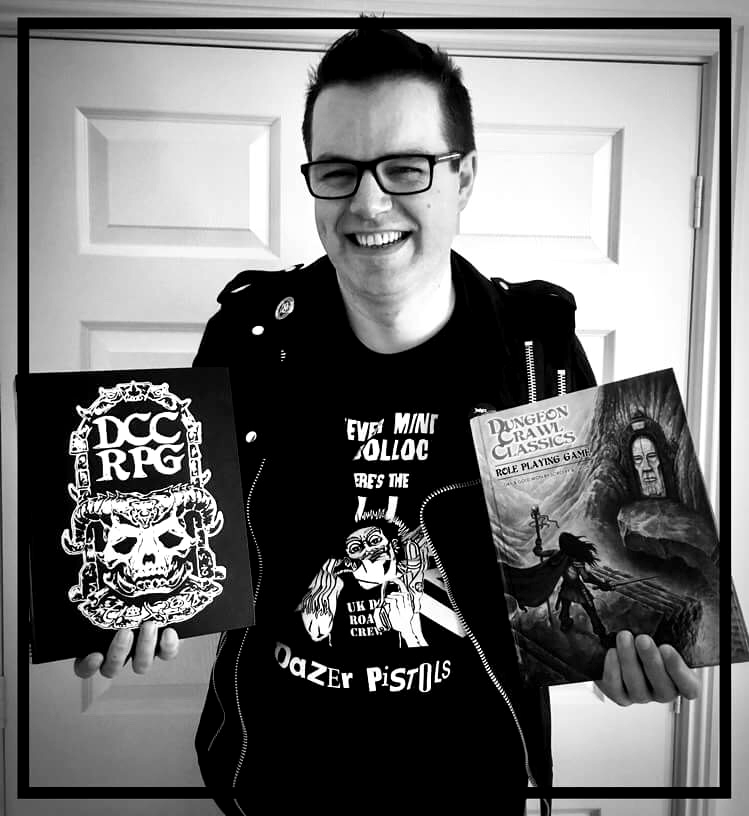