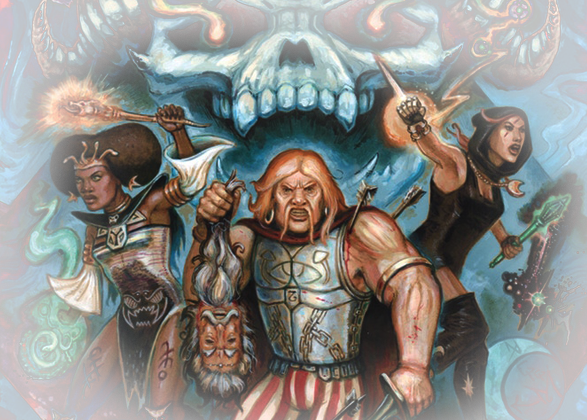 Not a hoax. Not a tease. This is reality.

The DCC Annual Kickstarter is LIVE! And it brought some friends along for the ride.

You may have heard stories of The DCC Annual told in whispers and stories around the campfire. It is the fabled book that was spoken of nigh-six-years back and then, with time, morphed into a thing of legend. Well, this legend is real, and it’s coming your way. 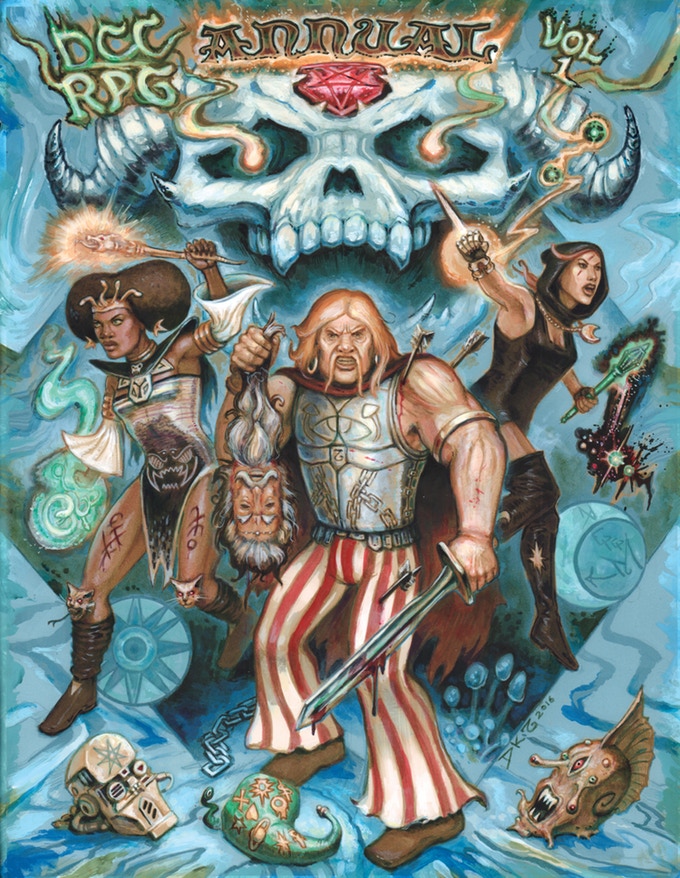 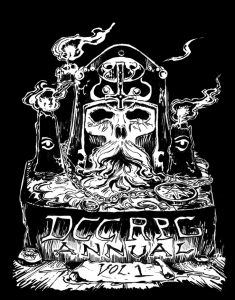 What more do you need to know? How about the fact that it’s 160 pages? And that it has two cover options: a full-color and foil cover edition—both by our own Doug Kovacs! And the foil version from the Kickstarter will be gold, whereas the mass-market version will be in silver. So folks will know if it’s the Kickstarter version at a glance!

But we’re not done. Not by a long shot.

Also included in this Kickstarter are the new printing of the DCC RPG Core Rulebook and the new hardcover edition of The Chained Coffin.

Let’s start with The Chained Coffin. 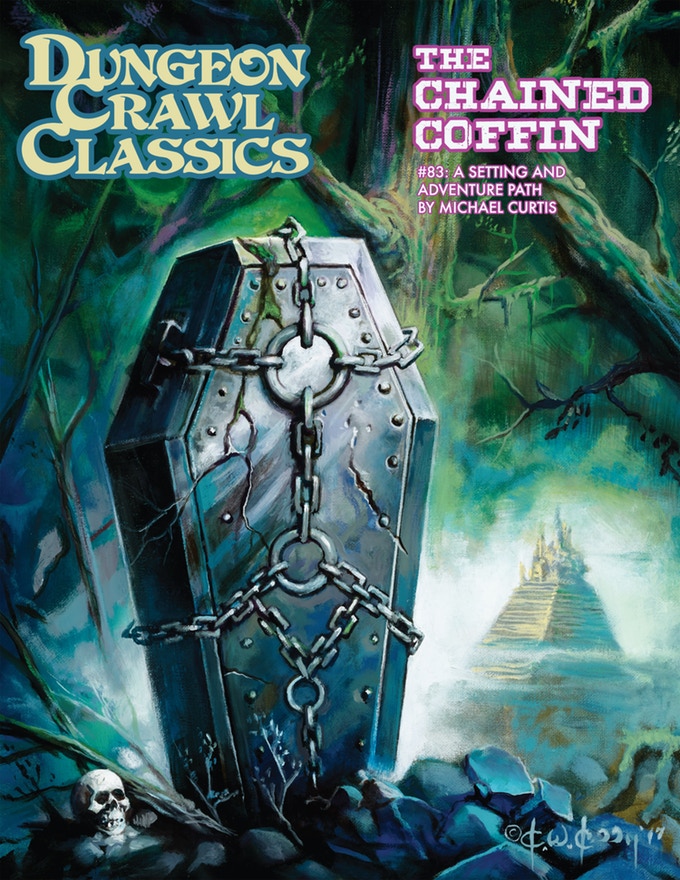 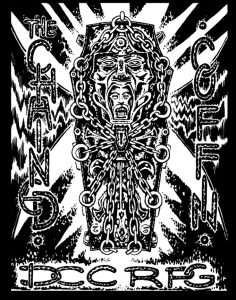 The Chained Coffin Hardcover is estimated at 160 pages and yes, it will also include the spinning map puzzle! Trust us, we’ve got this. Plus, there is a foil edition of the book, as well. And like the DCC Annual, the Kickstarter version of the foil edition will be different from the mass-market version.

And of course, there is the new, 7th printing (five hardcover, and two paperback) of the Dungeon Crawl Classics hardcover. Like every other printing of DCC RPG, the rules inside the book have not changed. And they won’t. That’s our promise to you. What it DOES have is a new level 2 adventure by Michael Curtis—Yddgrrl’s Maze—and two amazing new limited-edition covers.

The first new cover is by Doug Kovacs, featuring Shanna Dahaka, and it is gorgeous. The Kickstarter version of this cover will feature a foil logo on the front. 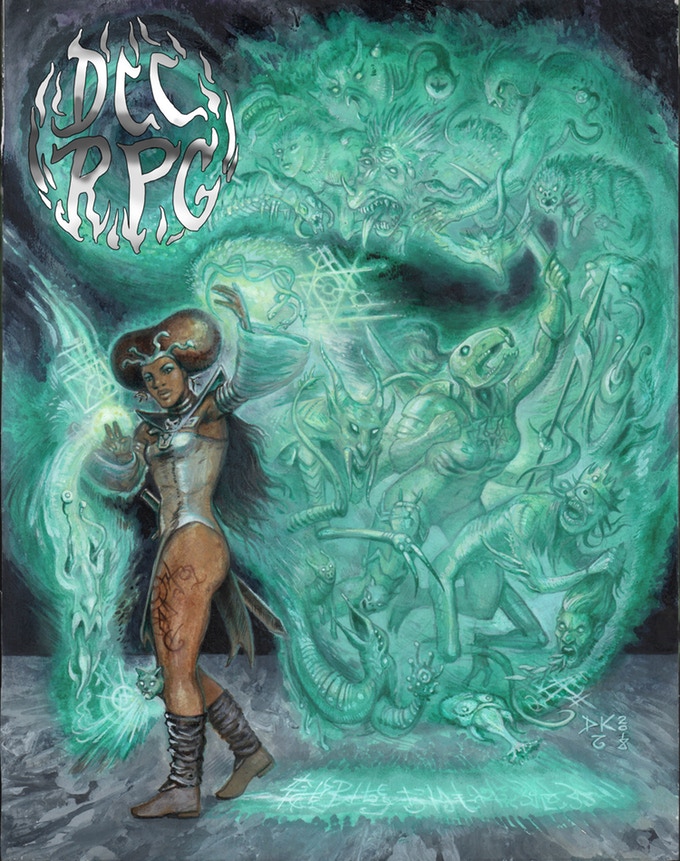 The other is by Sanjulian, and it, too, is breathtaking. And this one will also have a foil logo for the Kickstarter backers. 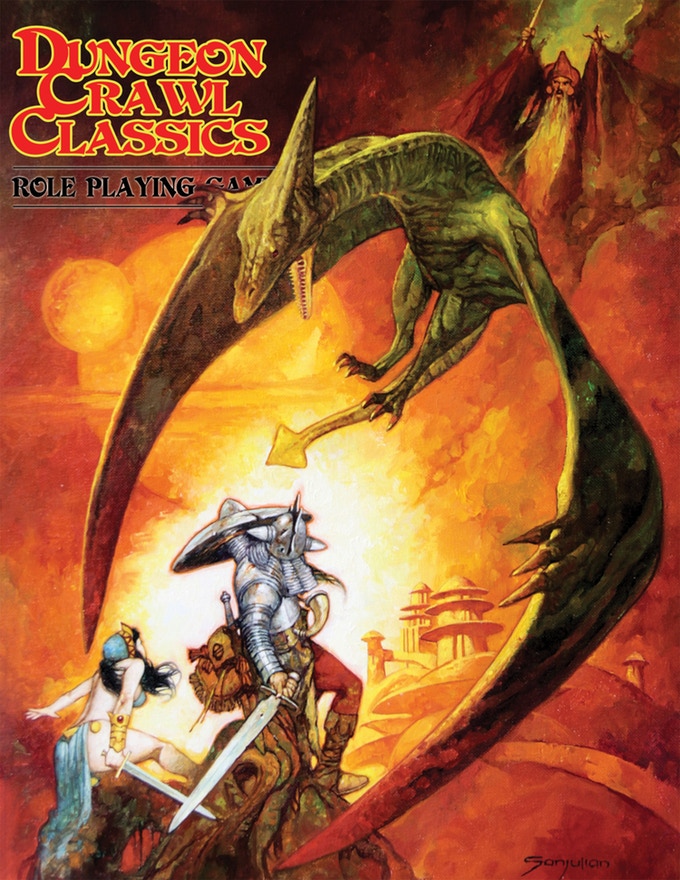 Oh, and one last thing. We’ll let the text from the Kickstarter say it:

We invite newcomers to join the Cult of DCC! As part of this Kickstarter, we are offering the DCC RPG Quick Start Rules, in print+PDF format, for the ridiculously low price of $2.00. That price includes postage to anywhere in the world. If you haven’t experienced DCC RPG, this is your chance to get in very affordably. The Quick Start Rules include everything needed to get your character from level 0 to level 2, and also include two one-session adventure modules. This pledge level also includes three free PDF adventures of our choosing.

Oh, and if you just want the PDF version of The DCC Quick Start Rules, we’re giving that away for free. Seriously. The link is on the Kickstarter page.

That’s a great deal. In fact, this whole Kickstarter is a deal. We’ve got three books with a selection of fabulous covers, and even discount level pledges for getting all of the books.

And it is now LIVE! Go on over and get in on the ground floor with this amazing new campaign!

One last thing: thank you. We are continually humbled by the amazing support of the Goodman Games fan community. Your love and passion for DCC and the other material we publish shows, and we wouldn’t have a place without you. So, from the very bottom of our hearts, thank you. You guys are the best.

Now let’s see about setting some Kickstarter records! Head on over and let’s see what we can do!