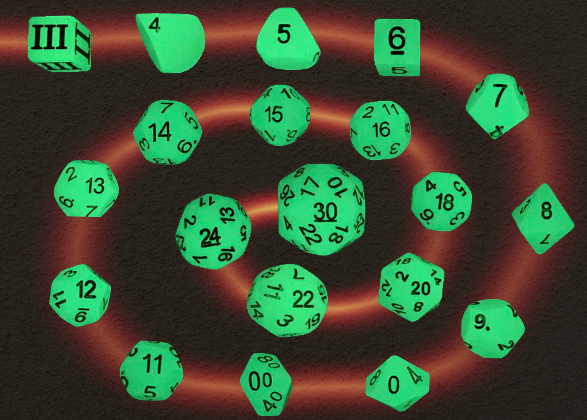 We love dice. Especially those dice that are…oh, let’s call them weird. You might have noticed that, just looking at what we do with Dungeon Crawl Classics and Mutant Crawl Classics.

That’s why we love this Kickstarter. The fine folks at Impact Miniatures—the folks who make the DCC Dice for us—have a Kickstarter going to introduce some truly unique dice into the mix. They are calling it the D.O.U.S.—Dice of Unusual Size—D21, D36, Pulse & Alphabet Kickstarter, and that name is very accurate. Though I hear there are those who don’t believe they even exist. Well, this Kickstarter will prove them wrong!

That’s just the additional dice! This Kickstarter lets backers choose full sets of dice that are perfect for use with games that utilize unusually numbered dice to make their game interesting. Like, say…Dungeon Crawl Classics! And there are other add-on dice that cover everything from the weather to the day of the week. It’s a dice-stravaganza!

Other than being a fan, Goodman Games is in no way associated with this Kickstarter. We just want to share some cool dice with folks that we know appreciate weird dice.

Click on over and show the folks from Impact Miniatures some love!