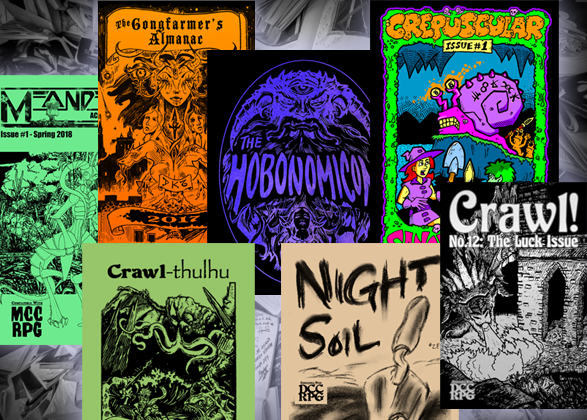 Last year, Goodman Games brought you A Brief History of DCC Zines. As those of us who love this game know, Dungeon Crawl Classics has an active do-it-yourself community. While this isn’t uncommon in the OSR as a whole, DCC is even more open to the do-it-yourself vibe than most games out there. It is written to both encourage and enforce creativity. Judges need to create new monsters and magic items, and will very likely find themselves wanting to homebrew a patron or two. “Quest For It” is the bleeding heart of DCC – rather than select options from a menu, players are encouraged to decide what they want their characters to be, and then figure out how to make it happen in the game fiction. The mechanics become almost an afterthought.

It should surprise no one that, if you encourage each table to make a game their own, there are going to be a chorus of voices wanting to share what they did with others. 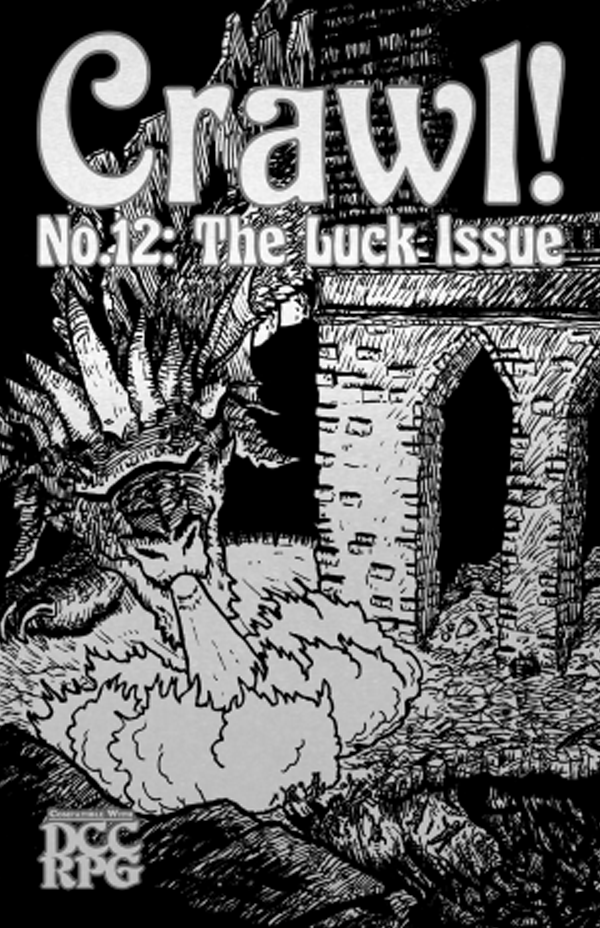 Crawl! is expected to continue, with issue #13 releasing sometime this year. Thereafter, at least one issue should come out each year, and possibly 3 to 4. Anyone familiar with both Crawl! and DCC modules will recognize that Rev. Dak has been put to work by Joseph Goodman, which has slowed zine production somewhat. There are plans to create a compilation of the first 13 issues, in a revised logical order, with fresh edits and some new art. 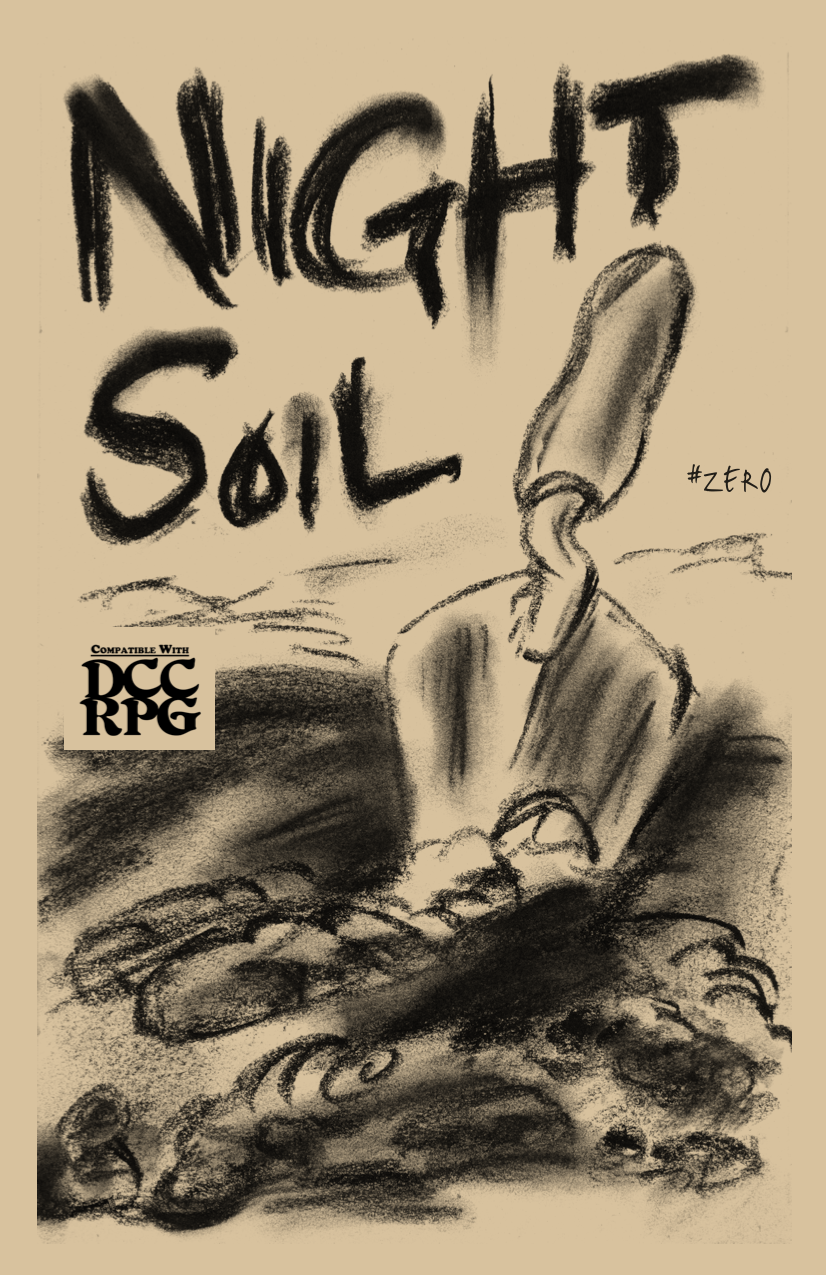 Night Soil #0 is the first issue of a new zine inspired by the art of the DCC core rulebook.  Editor Jon Wilson says, “I had organized a zine produced with the input and creativity of folks in the Holmes Basic G+ group, where we took the art from that early edition of D&D and creatively spun off new game elements inspired by that art. It was a lot of fun to produce and I immediately thought about how the art is so essential to DCC — everybody talks about the art! It seemed a natural thing to take that Holmes-inspired idea and apply it to the art of DCC.” This zine is not on a set schedule, but a total of eleven issues are planned – from #0 to #10, just like DCC character levels.

The #0 issue includes spells, creatures, magic items, and a few entries which are not so easily defined. All of it offers real use at the game table! Despite being the #0 issue, materials range in power level from entry to entry. Page references to the core rules are given, so that you can crack open the book and see which art inspired each item. Not only should you be getting this zine – you should be emulating it! Submissions are very welcome! 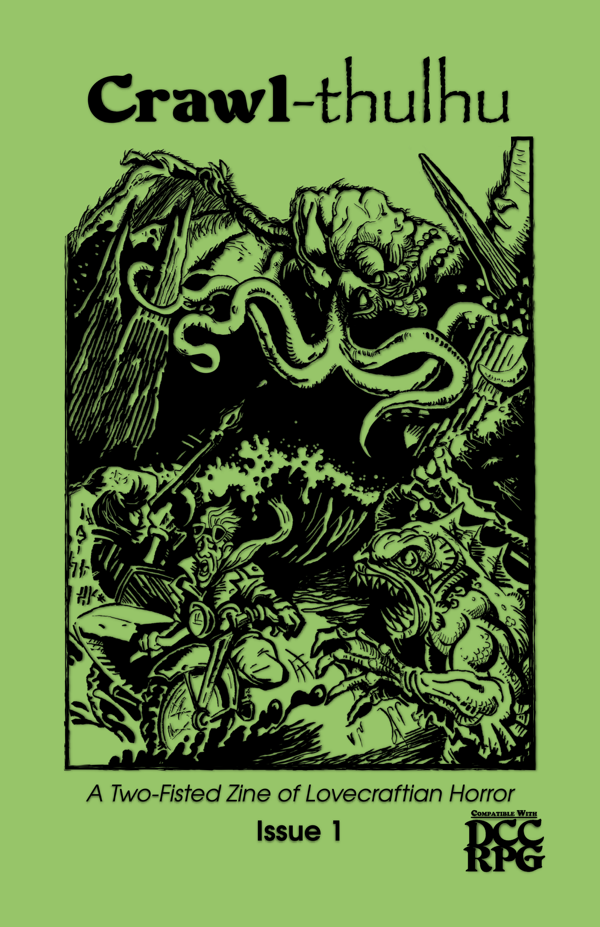 Crawl-thulhu is a zine dedicated to 1920s Lovecraftian horror mixed with a two-fisted DCC aesthetic.  The author discovered DCC, and then discovered the thriving DCC zine community. With a fine collective of talent, Issue #2 is mostly written and playtested, and ideas for future issues are being considered. Expect the second issue sometime next year. Perhaps the most important thing you will find herein is a Sanity mechanic, that can easily be adapted to other DCC games, and which doesn’t assume that lost Sanity is irrecoverable. In fact, to some degree, success is its own reward! This is definitely H.P. Lovecraft leavened with a dose of Robert E. Howard! 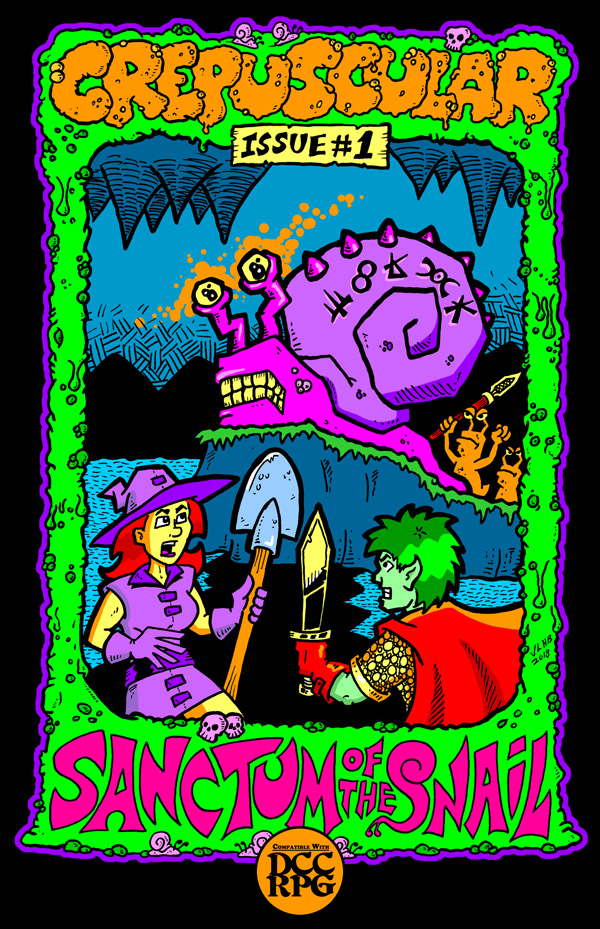 Crepuscular started when Joshua Burnett decided to run DCC at BASHcon in Toledo. He wanted to run something he had written, and once he had a fully written and playtested funnel adventure, a zine seemed like a good idea. The author writes, “I had little to lose, so I put the first issue of Crepuscular together and figured that if it was well-received I would continue the project and put out more issues. Thankfully, the first issue was very well received, and I sold through the first (admittedly small) print run the first weekend it was out!” The second issue is currently being written, with more details about the Crepuscular City of Xöthma-Ghül and another comic.

The black-light poster aesthetic of the cover art is fantastic. The issue’s feature is a solid adventure with a strong theme and lots of interesting bits to play with. My favorite part of the issue, though, was a small gallery of NPC henchmen at the end. This consists of both “normal” characters and unique individuals, and it was a good reminder that every campaign should have developed support characters ready to take their turn on stage, as needed. The PCs may be the stars, but they shine brighter when there are NPCs to compare them to, and for them to play off of. 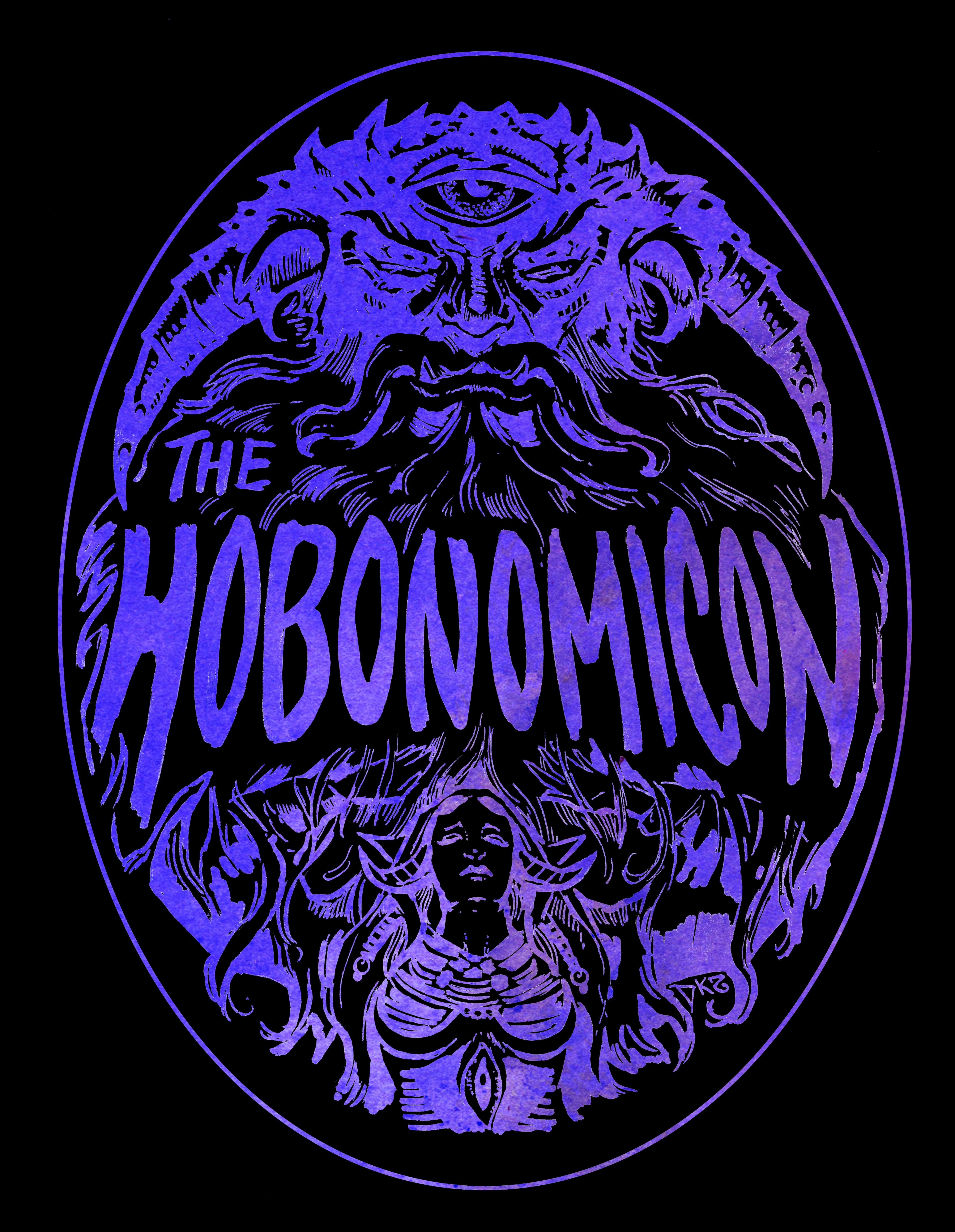 The first issue of the Hobonomicon has also been released. When asked, author and artist extraordinaire Doug Kovacs said, “The point of it is to make stuff for the games we like to play. It has its roots in games we have already run online.” He also suggested that Dogstorm might appear in the next Hobonomicon, too. If you have never played Dogstorm with Doug Kovacs, it is about as much fun as you can have in a “tactical” tabletop game!

Because this is Doug Kovacs, I do not need to tell you that the art is superlative. Content-wise, you get to try to escape from Planet Punjar. You also get the first part of the comic story that chronicles the Band (which you have seen illustrated throughout the Goodman Games DCC modules, etc.). 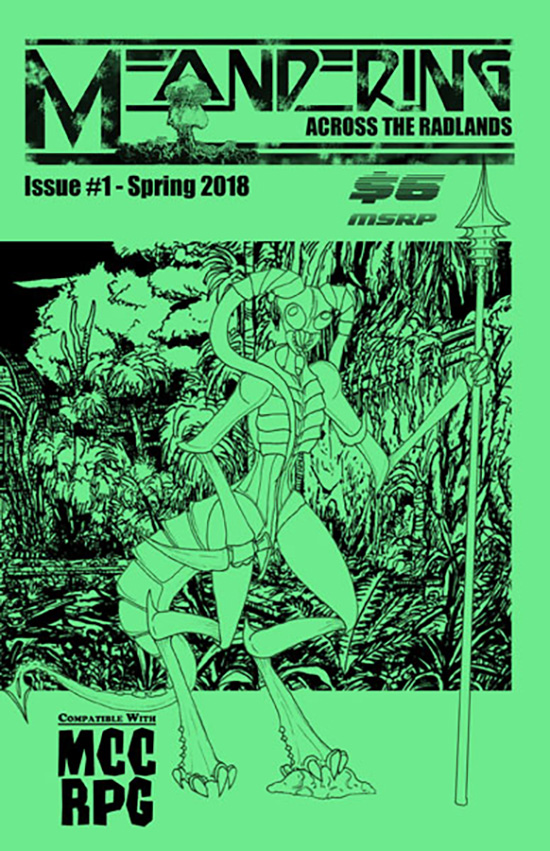 Meanderings Across the Radlands #1, the first zine dedicated to Mutant Crawl Classics, is now available, and the second issue is in the works. Among other things, it contains a subclass for your atypical manimal insects. This alone is worth picking it up for! 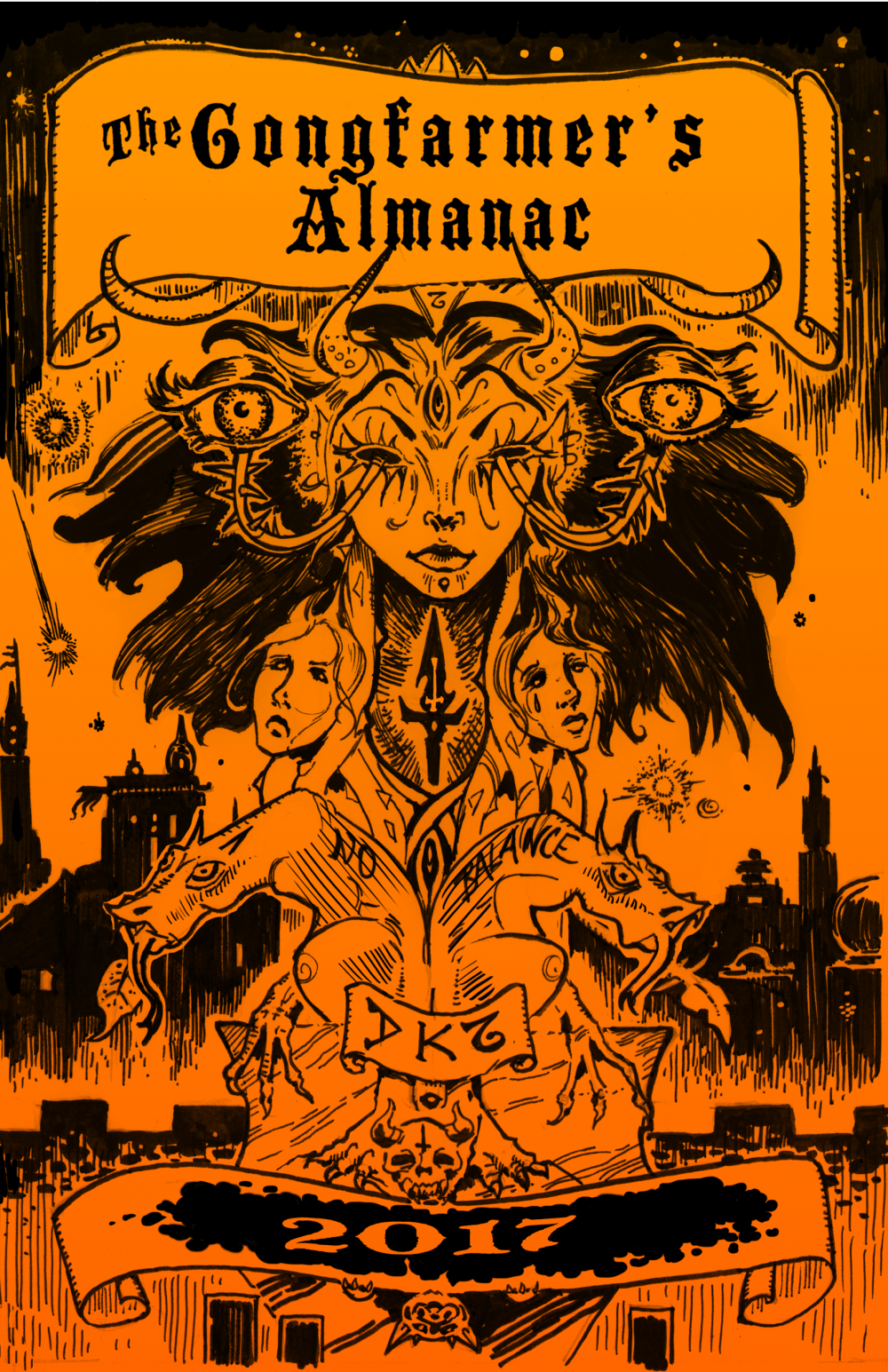 The Gong Farmer’s Almanac continues to go strong, with an annual Gen Con zine release which was seven issues this year. The GFA is free in pdf, and at-cost in print, so there is no reason why any DCC aficionado should not have it in their collection! The 2018 edition includes the first published adventure by judge Joan (of Arc) Troyer, new classes, new patrons, and a whole host of other goodies!

The do-it-yourself ethos of DCC has left us with an embarrassment of riches. We have not even broached the topic of single-issue zines, like Country Crawl Classics, Inferno Road, or Working Class Alphabet. Nor have we examined products which push the boundaries of what it means to be a zine, such as Cyber Sprawl Classics, D.A.M.N.!, The Phlogiston Books, and the Sanctum Secorum Episode Companions. Finally, future Zine Scene columns will also examine non-DCC OSR-based zines that any gamer should be aware of.

Who knows? Maybe we can even squeeze in the odd in-depth interview with the fantastic folks behind the scenes?

See you in the stacks!