Who in the World is Dave Arneson?

Home » Adventures in Fiction » Who in the World is Dave Arneson? 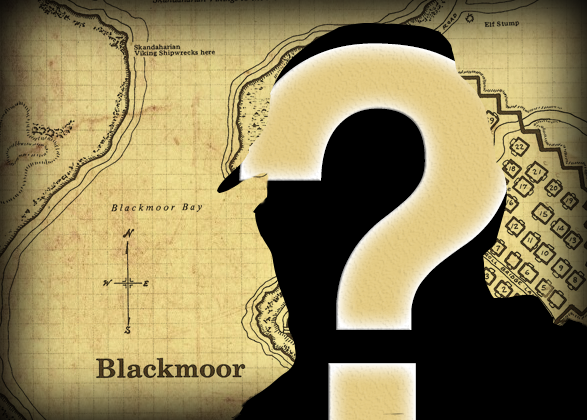 “Who in the World is Dave Arneson?”

A Dave Arneson Homage, Part 1 of 2

David Arneson, co-creator of Dungeons & Dragons, was born on October 1, 1947 and passed away in 2009. This year would mark his 71st birthday. In honor of his contributions to the hobby, we present this two-part essay. Here is the first part, and the second part will appear on October 1. 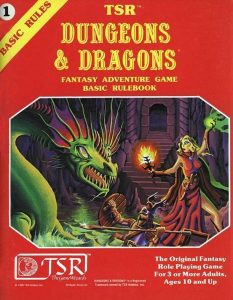 Like many my age, I was introduced to roleplaying games through the Dungeons & Dragons Basic Set whose rulebook was edited by Dr. J. Eric Holmes. Upon reading it, I was immediately enthralled and soon acquired the Monster Manual, the first of many TSR products that I would seek out over the weeks and months to come.

What most of these later purchases had in common is that they proudly bore the byline of Gary Gygax on their covers, their spines, and/or their title pages. Being young and wholly ignorant of the history of this strange new hobby I was undertaking, I subconsciously started to associate Gygax’s name with Dungeons & Dragons, to the point that I could scarcely think of one without the other.

This habit of thought only became more pronounced as I began to read Dragon regularly, since Mr. Gygax usually had one or more columns or articles in each issue. Through the pages of the magazine, he was the game’s greatest advocate and promoter – and why not? He was the creator of D&D, after all, and, by extension, of the very concept of roleplaying games, this remarkable new form of entertainment to which I devoted so much of my free time. 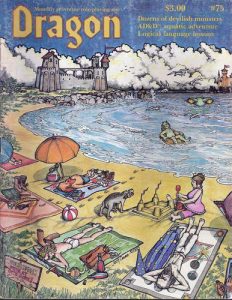 Perhaps unsurprisingly, I hung on every word that Gygax penned in Dragon and looked forward to reading them each month. I very distinctly recall receiving issue #75 in the mail in July 1983 and tore into it with vigor, for it contained a lengthy preview of the forthcoming Monster Manual II. As I read the issue, I came across a – to my mind anyway – very strange advertisement announcing the Special Guest of Honor at that year’s Origins game convention. Accompanying the ad was the black and white photograph of a smiling, bearded man apparently named David L. Arneson and whose claim to fame was that he was the “co-author of Dungeons & Dragons games.”

“Co-author of Dungeons & Dragons games?” What did that mean, I asked myself. I could not recall ever hearing of this David L. Arneson before and now, suddenly, here he was before my eyes, being touted as having had a hand in the creation of my beloved D&D. How was this possible? How had I never come across him before? I quickly consulted the rulebook of the Basic Set and, lo and behold, there was his name on the title page: “By Gary Gygax and Dave Arneson.”

I could hardly believe that I had somehow overlooked the very existence of Dave Arneson for all these years. By the time I came across that advertisement in Dragon, I had been playing D&D and other RPGs for almost three years. Yet, in all that time, I could not remember a single occasion when I was aware of Arneson’s name, let alone his contribution to the creation of D&D. Confused by this, I consulted my other rulebooks, to see if I could solve this mystery. To my surprise, I found a reference to him in the preface to the AD&D Players Handbook, but nowhere else. I looked in both the Monster Manual and Dungeon Masters Guide and found no further evidence of his involvement with D&D. 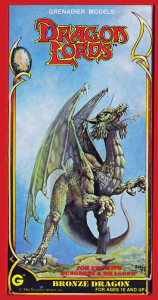 Not long thereafter, I was at my local game store and saw several boxes of new miniature figures released by Grenadier Models. I owned quite a few Grenadier miniatures, owing to the fact that, for many years, they were officially licensed for use with Advanced Dungeons & Dragons. For reasons I did not know at the time, Grenadier had lost the license and therefore had to re-brand their figures as “Dragon Lords” and “Fantasy Lords.”

I picked up one of the “Dragon Lords” boxes and flipped to the back, where there was a photograph of the miniature figures it included. Off to the right hand side, there was another photo, one of that a familiar smiling, bearded face – Dave Arneson! Above his photo was a quote, in which Arneson endorsed the figures, while below it was a caption that, once again, identified him as the “co-creator of Dungeons & Dragons.” I found this reminder of the existence of Dave Arneson a little less baffling than I had the advertisement in Dragon, if only because I had already been made aware of him, but I still knew next to nothing about him or his role in the creation of the game and the hobby that I so adored. I soon decided that I needed to rectify this situation.

I started by seeking out the older role-players and wargamers whom I knew through hobby shops and local games days, hoping that they could fill me in on Dave Arneson and his role in the creation of D&D. These efforts were only partially successful, however. What I gathered was that Arneson and Gygax had once been friends and colleagues, working on Dungeons & Dragons together in the early 1970s before having some kind of falling out that resulted in Arneson’s disappearance from the gaming scene. Some of the people I consulted even spoke vaguely about there having been a lawsuit regarding copyrights or ownership of the game – no one was at all clear on the specifics and, this being the era before the Internet, there was no easy way to get to the bottom of it all.

A couple more years passed, during which time I learned a few additional details about Dave Arneson. I learned, for example, that his original campaign was called Blackmoor, a name that immediately caught my attention because of its appearance in Gygax’s own World of Greyhawk setting. I also learned that he lived in the Twin Cities, which surprised me, as I had come to think of Lake Geneva, Wisconsin and the surrounding areas as Ground Zero for the establishment of the hobby of roleplaying. Though I was still very interested in the subject of Arneson, the slow pace at which I was able to learn more discouraged me somewhat. 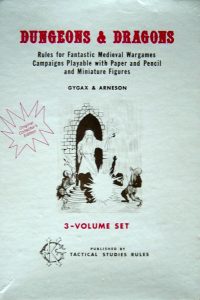 My father, who had inadvertently introduced me to Dungeons & Dragons through his following of the famous disappearance of James Dallas Egbert III in 1979, told me that a game store near his workplace was clearing out its back stock at discounted prices and that he thought there might have been some D&D products amongst them. He asked if I wanted him to pick up anything for me. I replied that I was only interested in “old stuff,” explaining that I meant anything published before 1980. My Dad, bless him, went to the store and asked the clerk if they had anything like this and he came home with a little white box and a handful of tiny books.

The white box, I soon discovered, was the original edition of Dungeons & Dragons (or, rather, a later printing of it) and the tiny books were its first supplements. I dimly knew of the existence of this white box, but little of its actual contents. The forward [sic] to Volume 1, written by Gary Gygax, on November 1, 1973, however, offered up some useful historical tidbits:

“Once upon a time, long, long ago there was a little group known as the Castle and Crusade Society. Their fantasy rules were published, and to this writer’s knowledge, brought about much of the current interest in fantasy wargaming. For a time the group grew and prospered, and Dave Arneson decided to begin a medieval fantasy campaign for his active Twin Cities club. From the map of the “land” of the “Great Kingdom” and environs – the territory of the C&C Society – Dave located a nice bog wherein to nest the weird enclave of “Blackmoor,” a spot between the “Great Kingdom” and the fearsome “Egg of Coot.” From the CHAINMAIL fantasy rules he drew ideas for a far more complex and exciting game, and thus began a campaign which still thrives as of this writing! In due course the news reached my ears, and the result is what you have in your hands at this moment.”

What a revelation! Here, in just a few sentences. Gary Gygax had given not just a capsule summary of the creation of Dungeons & Dragons, but, perhaps more importantly to me, he had made clear that it was Dave Arneson, not himself, who had pioneered the concept of a roleplaying game and laid the groundwork for the rules of D&D. It was becoming ever more clear to me that the history of the game I loved was much more complicated than I had imagined and that Dave Arneson, a man of whom I had not heard until a few years previously, had played a huge role in that history – a role that, for whatever reason, had become obscured. 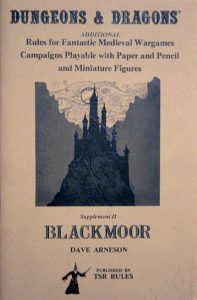 One of the aforementioned tiny books was Supplement II to the original Dungeons & Dragons, bearing the title of Blackmoor and the byline of Dave Arneson. Its foreword – correctly spelled this time – by Gary Gygax was dated September 1, 1975 and speaks of Arneson thusly:

“Dave Arneson … Is there really such a creature? Yes, Gentle Readers, there is, and shudder when the name is spoken. Although he is a man of many talents who has authored many historic rules sets and games (which TSR will be publishing periodically), Dave is also the innovator of the “dungeon adventure” concept, creator of ghastly monsters, and inscrutable dungeon master par excellence.”

Gygax later states outright that he “co-authored the original work with Dave” and that he “would rather play in his campaign than any other.” This is high praise indeed and once again confirms that Dave Arneson was once an important person in the history of RPGs.

By the time I had read this (1986), Gary Gygax himself had left TSR and a new edition of Advanced D&D was in the works under the direction of David Cook. Among the other products TSR was publishing at that time was a series of adventure modules set in the Blackmoor setting of Dave Arneson. I grabbed them all with excitement, hoping they might offer further insights into the mysterious man who had helped to give birth to D&D. Whatever their other merits, I learned little of Arneson from those modules.

My quest to learn more about David L. Arneson was, in those days, only a limited success. I still had a lot of questions about his involvement in the creation of both Dungeons & Dragons and, more broadly, roleplaying games. I also remained intensely curious about why he had been, for so many years, a figure whose profile was so comparatively low. As I had learned, Arneson was, in a very real sense, one of the “founding fathers” of roleplaying games. Given that, why was he not more well known?

It would not be until the 21st century that I began to find answers to this and other questions I had about the man. One of the ways I did this was becoming more familiar with the games, RPG and otherwise, that he had designed during the 1970s and ’80s. The other way was, thanks to the Internet, to learn from people who knew more about both Arneson and the early history of the hobby than I could have discovered on my own.

What I learned was remarkable.

Tune in tomorrow for the rest of the story! 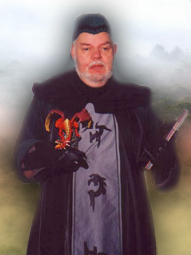