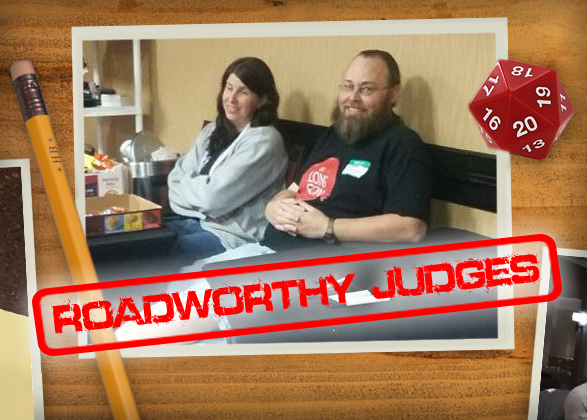 From the southern section of the US comes our newest star. Running games from the wilds of Texas to Louisiana, this man claims to be one half of the Tag Team Champions (along with Matt Gullett) of the Road Crew! And like our previous Roadworthy Judge, this man is also an Xcrawl DJ! We present Judge Eddie Bartlett! 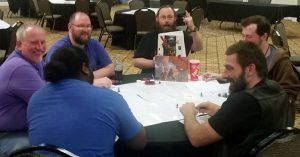 Greetings fellow Goodman Games fans, I’m Eddie Bartlett. I live in Longview, TX and I game all over the Ark-La-Tex. My primary spots to run are Tyler, TX, Longview, TX, and Shreveport, LA.  I would describe myself as someone who just really wants to share the RP love and spread this hobby of ours.

I’d also like to point out that Xcrawl is part of the Roadworthy, and probably half my games have been Xcrawl.

My friend Matt Gullet, Roadworthy Judge April 2018, started begging me to play this new game with him a few years ago (2015!). He’s a man of many and varied interest so I humored him a bit, but didn’t really jump on the bandwagon till recently.

I’m going to add Nick the DJ, who introduced me to Xcrawl several years before that. It was the worse game I ever played (due to party dynamics). I walked into a party ready to explode, got my one session in and then never got a chance to play Xcrawl again, but my imagination was FIRED UP by the possibilities! Full-time Dungeon Judge now. 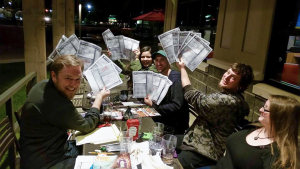 For Xcrawl, I’d say every time I run a game for new players. It’s so different from the typical dungeon experience, you can be silly and have fun while I destroy your character, haha.

For DCC, it goes back to question one, sharing the hobby. I ran Shambling Un-dead for two tweens and their dad. It was their first RP experience, and they had a good time. Every time Dad got another “You Died” stamp, the kids would laugh and laugh. After the game, I bought them some dice and I hope I made some lifelong RP fans after that.

My favorite game shop is Dragon’s Lair in Shreveport, LA! These guys put the Friendly in FLGS. I also love Geek World in Tyler, TX! I have also run at a few bars and restaurants, I highly recommend that to you guys trying for the Strange New Worlds like me. I also run at The Long Con, Red River RPG Con, and the North Texas RPG Con.

Also, for Road Crew specific, try to pair up with a pal. Matt and I run a 100-mile circuit of gaming, and sometimes it’s a full house and sometimes it’s one person. Having that buddy pays off since you’ve always got one more player when it’s dead or someone that can run a second table when it’s jumping. 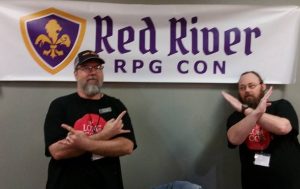