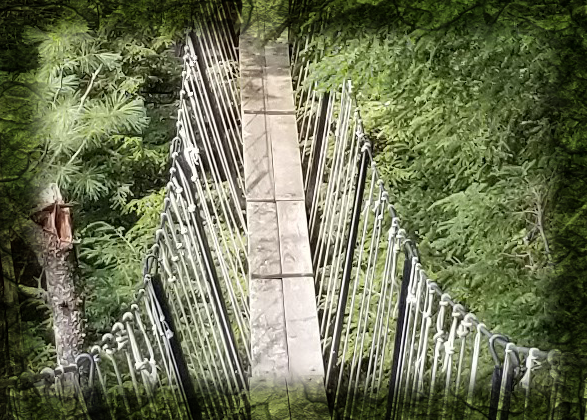 While many were celebrating the “Best Four Days in Gaming” this year, I celebrated my birthday by visiting the Haliburton Forest in Ontario, Canada. This entailed spending a night in at 23 Maple Bed & Breakfast in Haliburton so that I could be on time for a 9 am canopy walk tour. This is something that I had wanted to do for years, and it was a blast.

With a mixed group, we were driven to the lake, where we embarked on two canoes to the canopy walk itself. The canoes were moored on a floating dock – too many people on the dock would submerge parts of it, and the dock spiders would come scurrying up. One could easily imagine an encounter (perhaps in Grimtooth’s Trapsylvania), where a floating bridge disgorges whole swarms of the 2-3 inch arachnids!

Across the lake, we donned harness after a brief walk, and took to the trees.

The canopy walk is created by suspending long boards among the trees, about the lower and mid-range canopy, with wire ropes. There is more than adequate “railing” created by the wires, and hikers use a two-clip sliding harness to ensure that no one tests the realism of the DCC falling rules. Fans of Edgar Rice Burroughs will recognize the allure of hiking along these higher ways, even if it is not in the same manner as Tarzan, Korak, or the Vepajans of Amtor – the thrill of new experience, the different viewpoint, and the broad vistas where breaks in the foliage allow you to see much farther than you would on the ground.

Judges may be tempted to call for Agility checks or Reflex saves when PCs move along similar structures, but where reasonable care is possible, no checks should be needed. No one ended up dangling from the safety harness! Combat in a similar situation would be different. If there was a need to hurry, rather than taking reasonable care, a slip could also occur. There is quite a bit of bounce and movement on the boards beneath your feet, something Tolkien didn’t really describe among the flets of the elves in Lothlorien. I could easily see an arboreal “dungeon” supplying unique challenges to the PCs.

The profusion of fungi in parts of the higher reaches was also a surprise. I had tended to view this as a phenomenon of the forest floor, even after a childhood of climbing trees which lasted well into my thirties. The lorecaps, described below, are loosely based off of these growths.

After the canopy walk, we canoed back to the dock, boarded the awaiting van, and were driven back to the main building. We also received tickets to the Wolf Centre (which is how they spell it in Canada), both to see live animals and to wander in a small museum. The museum contained images of wolves (including literary ones), showing how our perceptions of the creatures has changed over the centuries.

Lorecaps are rare colonial growths of translucent yellow-orange fungi which grow between 30’ and 50’ up the boles of trees, descending only to feed. They use their psionic blast to stun individual creatures passing below them. When a creature reaches 0 Intelligence (the result of a single, or, at the most, two such attacks upon creatures of the lower orders), it sinks into a coma for 24 hours (at which point, 1 point of Intelligence is restored). Such a creature seldom arises again, for it cannot defend itself when the lorecaps creep their way slowly down their tree to consume it.

Lorecaps communicate telepathically, and can read surface thoughts from up to 120’ away. They have a great store of wisdom, gleaned from the thoughts of creatures that have passed nearby. Colonies can retain information going back centuries – while individual fungi may survive no more than a few years, the communal mind lives as long as the colony itself. Those who bring suitable payment in the form of animal carcasses may learn much from these fungi. A Will save (DC 15) is needed to convince the lorecaps not to take both offering and offerer if they can.