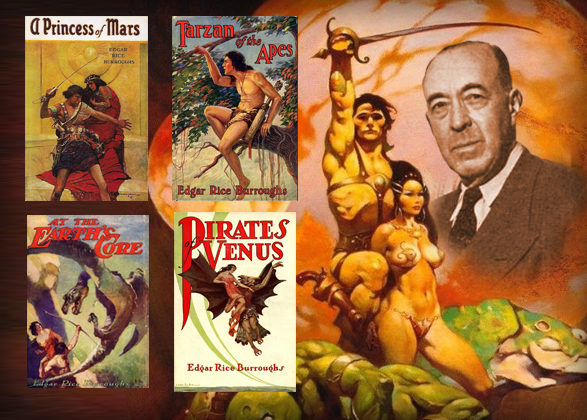 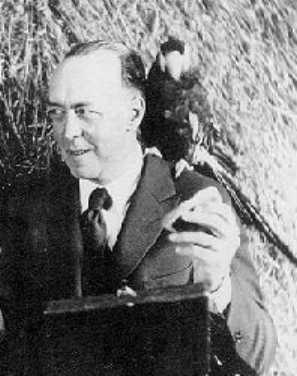 September 1 is the birthday of Edgar Rice Burroughs, affectionately called “ERB.” Although he’s best known for his Barsoom/Mars, Tarzan, Pellucidar, and Venus series, he wrote many other works, including historical novels and westerns. It’s beyond the scope of this article to reveal just how influential ERB has been to science fiction, fantasy, gaming, and all the sub-genres therein. A brief survey of the DCC RPG repertoire reveals numerous applications of his ideas. Even the core rulebook for DCC RPG has stats for four-armed white ape-men, a nod to Barsoom’s white apes. The debt we owe him is immeasurable! For an excellent overview of the Barsoom/Mars series, please read James Maliszewski’s Why You Should Read the Barsoom Novels.

It’s interesting that ERB didn’t initially anticipate his eventual popularity. Allegedly fearing for his reputation, his first Mars story was published under the pseudonym “Normal Bean,” which the typesetter erroneously changed to “Norman Bean.” Encouraged by readers’ enthusiasm, he dropped the alias after his first novel. 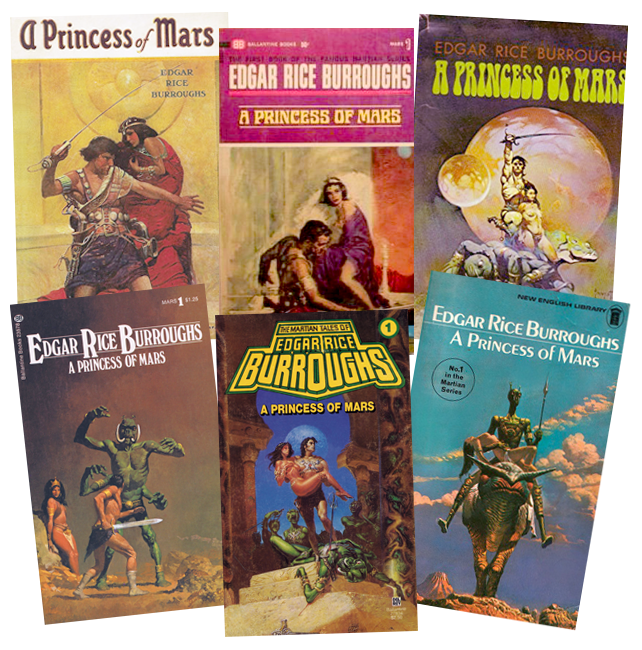 Edgar Rice Burroughs’ writing is so evocative that mental images of his creatures and settings persist, and are recognizable in artists’ renditions. No matter who is drawing, we identify them. This is especially true for the green warrior race of Barsoom, even though some artists stray slightly from their description. When John Carter first encounters Tars Tarkas and his Tharks (in A Princess of Mars), he says, “Their eyes were set at the extreme sides of their heads a trifle above the center and protruded in such a manner that they could be directed either forward or back and also independently of each other, thus permitting this queer animal to look in any direction, or in two directions at once, without the necessity of turning the head.” From this description, one might imagine eyes like a chameleon’s. Nonetheless, some artists remove this feature, placing the eyes at the front of the skull, like a human’s. Regardless, there is no doubt that we’re looking at ERB’s green Martians. The four arms, the tusks, the stature, and the color all resonate with our own impressions of these creatures. I’ve incorporated ERB’s incredible ideas into my own writing for DCC RPG, especially in the DCC #84: Peril on the Purple Planet Box Set . 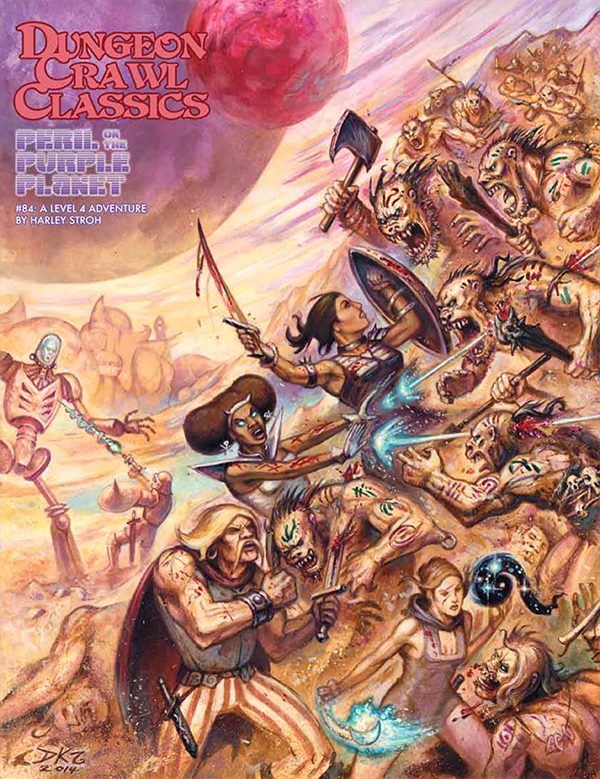 Barsoom’s green warriors are certainly memorable, but none of ERB’s creatures has made a stronger impression on me than his plant men (in The Gods of Mars). These “odd, grotesque shapes” appear as 10’-tall men, with some caveats. “Their arms, however, were very short, and from where I stood seemed as though fashioned much after the manner of an elephant’s trunk, in that they moved in sinuous and snakelike undulations, as though entirely without bony structure, or if there were bones it seemed that they must be vertebral in nature.” These are used for feeding, “sucking it up from its two mouths, which lie one in the palm of each hand, through its arm-like throats.” The plant man’s head is also noteworthy, “covered by a tangled mass of jet-black hair some eight or ten inches in length. Each hair was about the bigness of a large angleworm, and as the thing moved the muscles of its scalp this awful head-covering seemed to writhe and wriggle and crawl about the fearsome face as though indeed each separate hair was endowed with independent life.” Another thing I liked about this creature was that it “underwent the gradual changes of evolution, passing by degrees from true plant life to a combination of plant and animal.” This horrific monstrosity was my primary inspiration for the Purple Planet Companion’s Upravian Stalker (DCC 84B, Purple Planet Box Set, p. 34-35). 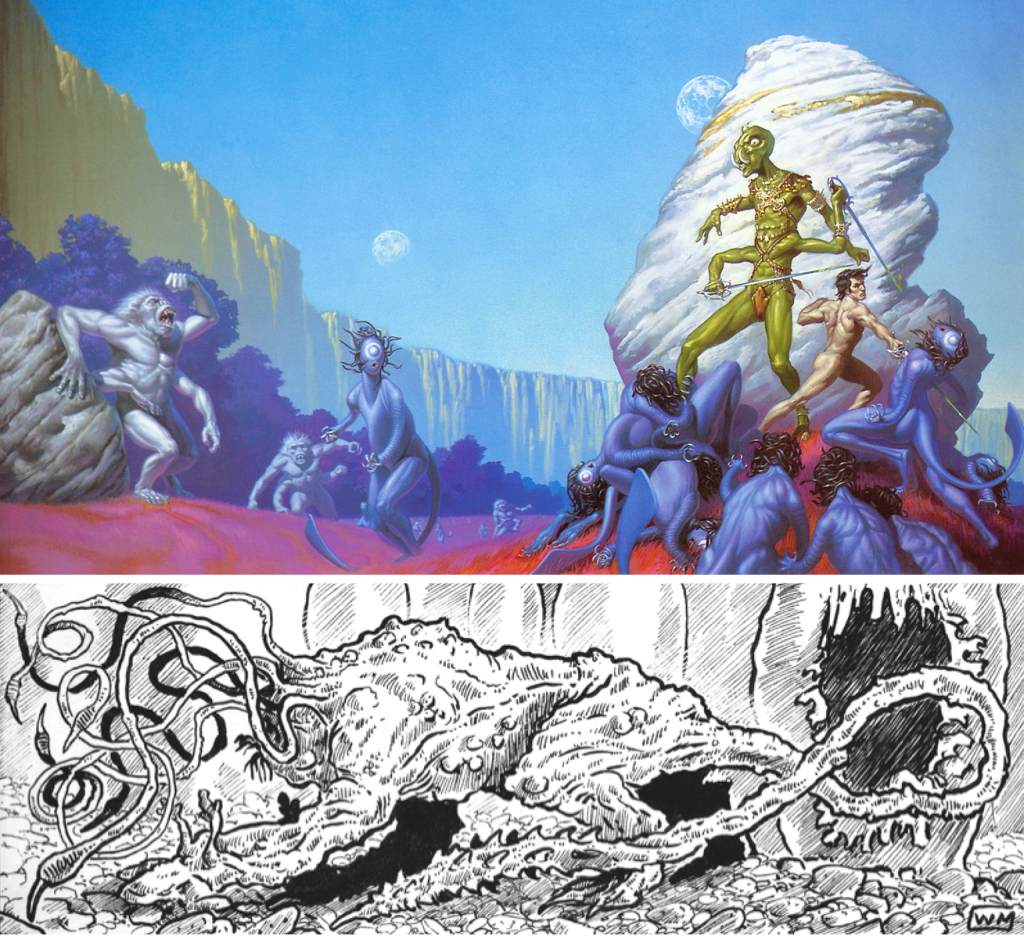 In designing the Upravian Stalker, I remembered the impressions I had from Burrough’s plant men, and used them to create a “plant panther.” I combined the worm-like hair and elephantine, sucking arms, so that the stalker “has no head per se, but has a muscular neck capped with fluorescent green, serpentine stalks (20-30 three-foot long proboscises), each ending with a sharp bone and burrowing sucker.” I also wrote the beast as blue-colored, an asexual fusion of plant and animal, and planted a theory (pun intended) that stalker pups grow from the fungal mane of a pride’s leader. These features’ inspirational roots are the plant men as described in The Gods of Mars.

In addition to creating memorable creatures, Edgar Rice Burroughs incorporated contemporary ideas in physics and astronomy without being too literal. The astronomer Percival Lowell, inspired by Giovanni Schiaparelli’s 1877 discovery of channels in the Martian surface, hypothesized the existence of Martians (1895, 1906, 1908). To be fair, Shiaparelli said there were “canali,” which means “channels” in Italian; however, many misinterpreted this word as “canals.” Regardless, ERB incorporated Lowell’s ideas, and included water canals spanning Barsoom’s surface. Burroughs also applied pseudo-physics in his creation of the eighth and ninth rays of light. John Carter first encounters these in A Princess of Mars, “a strange stone, an inch in diameter, that scintillated nine different and distinct rays; the seven colors of our earthly prism and two beautiful rays which, to me, were new and nameless. I cannot describe them any more than you could describe red to a blind man.” The ninth ray is somehow critical to Barsoom’s atmosphere plant’s oxygen generation process. The eighth ray is for propulsion; it propels light and enables flight. One can draw analogies between this concept and the nineteenth century luminiferous aether theories which asserted that light must have some medium to transmit it. This notion was experimentally disproven in 1887 by Michelson and Morely, but similar experiments were repeated from 1902 to 1905, and in the 1920s. A Princess of Mars was serialized in 1912. 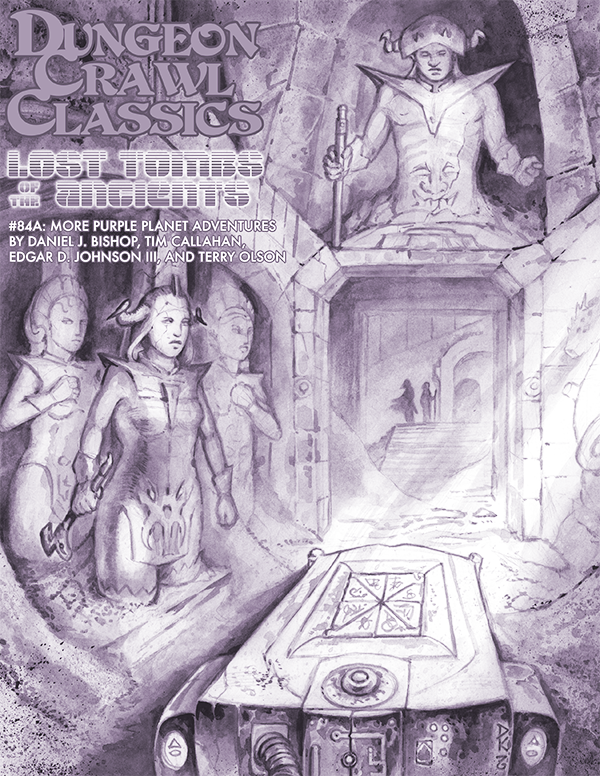 Despite the physics being wrong, I enjoy incorporating ERB’s two additional rays of light in my writing. In the Lost Tombs of the Ancients supplement (DCC #84A: Purple Planet Box Set), I incorporated this idea in “The Tomb of the Immoral Kahl.” In the Hall of the Husks (p. 7), one finds that these two rays are necessary to create a 3D image with sound, “Rays of light erupt from the walls in green, red, blue, and two ‘colors’ that are beyond your experience.” I applied the nine rays of light differently in the Purple Planet Companion’s “Lost Tech of the Ancients.” Here, I wrote the Rayshield (p. 24) as, “a silver skull cap with nine metal arcs radiating outward from the top.” The idea is that each arc produces one of the rays of light to form a protective sphere that partially repels energy attacks. 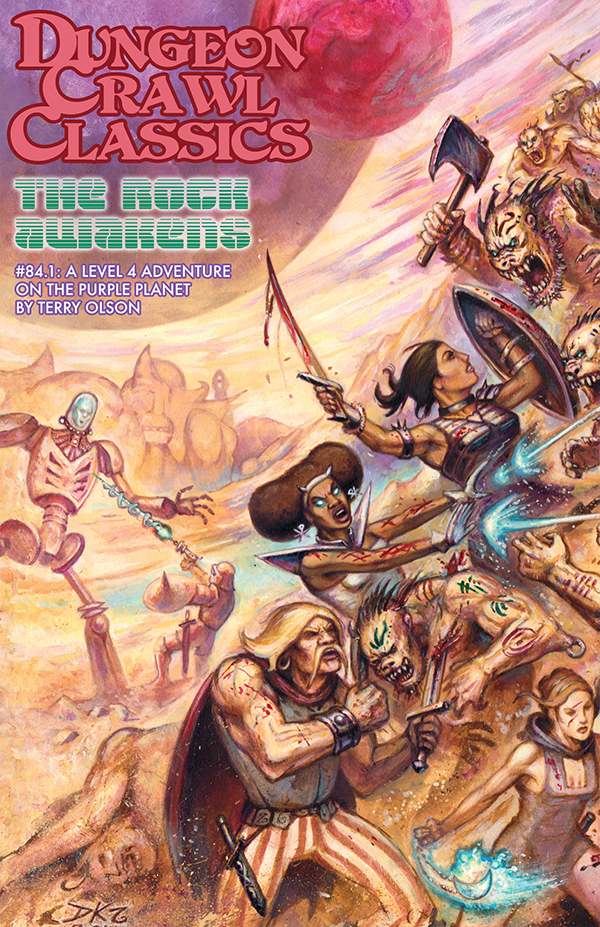 In addition to the Peril on the Purple Planet Box Set, I incorporated some of Edgar Rice Burrough’s ideas in DCC #84.1: The Rock Awakens. This adventure introduces the blue kith and the black navigators; the latter are a technologically superior race that landed on the Purple Planet and were worshiped as gods. One of the navigators joins with a blue kith to start a new race. This is inspired by ERB’s racial history of Barsoom, as stated in The Gods of Mars, “In addition to the green men there had been three principal races upon Barsoom. The blacks, the whites, and a race of yellow men. As the waters of the planet dried and the seas receded, all other resources dwindled until life upon the planet became a constant battle for survival… The result was a partial amalgamation of the blacks, whites and yellows, the result of which is shown in the present splendid race of red men.” Even the adventure’s setting, an ancient ruined city of the blue kith, was inspired by my impressions of reading about the Thark’s base of operations in A Princess of Mars, “the evidences of extreme antiquity which showed all around me indicated that these buildings might have belonged to some long-extinct and forgotten race in the dim antiquity of Mars.”

These have been just a few examples of inspirational passages from Edgar Rice Burroughs, and how I’ve incorporated them into DCC RPG adventures. On this September 1, take a moment to imagine how different our hobby might be if “Normal Bean” had never submitted his first Mars manuscript. I cannot do this without picturing a gaping hole. Thanks ERB, for giving us a red planet we could color purple.