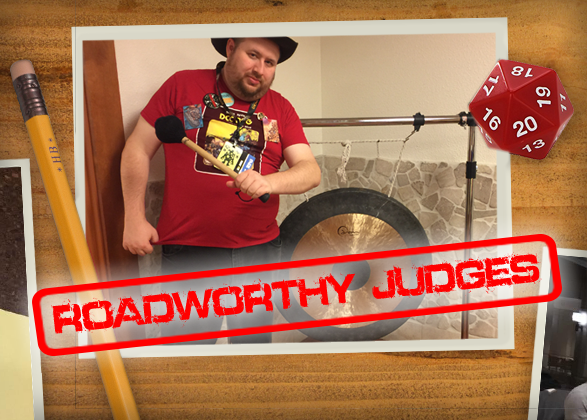 Have you heard about The Gong of Doom? It’s the way we announce another soul has passed from our DCC Team Tournament at Gen Con. Every time a PC dies, the player has to do the Walk of Shame to bang the gong. The sound of the gong symbolizes the sound of the gods reclaiming the PCs’ soul back to the afterlife. At the 2018 Gen Con DCC Team Tournament The Gong of Doom resounded throughout the day and paved the way to a dramatic finish for this year’s event.

It was last year, at the 2017 Gen Con DCC Team Tournament, where The Gong of Doom made its debut. The idea and the presentation of it served as a huge inspiration to one of our Road Crew Judges in particular—Judge Ogrebeef. It was such an inspiration that he wanted to experience it for himself. At his own tournament.

Not that long ago we profiled Judge Ogrebeef with a Roadworthy post, but his initiative to procure a gong of his own and run a tournament piqued our interest. So, we returned to question Judge Ogrebeef about his tournament and the gong that went along with it.

Tell us about the tournament you ran. 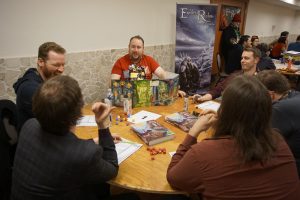 I wanted to do a level 0 tournament at our local game convention, Terminal City Tabletop Convention. It’s a weekend where 400-600 people play games together. It’s pretty casual. This was the first year we had a dedicated RPG room away from the main hall, which I help co-organize, and I wanted to make it special.

What made you decide to rent a gong?

I saw pictures of the Goodman Games DCC Team Tournament at Gen Con, and noticed y’all had a big gong there to announce the beginning and end of the tournaments. I decided I wanted to do the same thing.

The gong wasn’t that much money to rent, although transporting it in my little car was a hassle.

Any stories from your use of the gong? 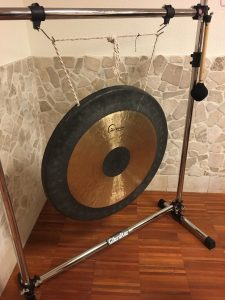 Once we had the gong in the RPG room the convention organizer took notice and wanted to borrow it to do his announcements in the huge main hall. You could hear all the people in the main hall constantly. There was lots of noise, even in our little RPG room—but as soon as the gong went off there was dead silence. It was a huge success.

We also used the gong for the same effect in our little RPG room when I was handing out prizes to tables. Everyone shuts up when they hear a BONGGGGGGG

Just like at the big conventions I used it to start the timer on my Level 0 Tournament. I ran the tournament module The Shambling Un-Dead and gave out lots of prizes and ribbons.

Everyone had a good time. Next year I’m planning to do the MCC tournament module the same way.

A huge thanks to Judge Ogrebeef! His willingness to go above and beyond deserves the attention, proving that he is truly deserving of the term…ROADWORTHY!

You can pick up the adventure module he used at his tournament FOR FREE! Check out The Shambling Un-Dead for yourself!

And don’t forget that you can pre-order your copy of Dungeon Crawl Classics: The Black Heart of Thakulon the Undying (2018 Gen Con Program Guide), featuring the module used at the 2017 Gen Con DCC Team Tournament!

And share your unique tournament stories with us! Maybe we’ll be impressed and give you a Roadworthy moment—or two!