Announcing DCC Lankhmar #8: The Land of the Eight Cities 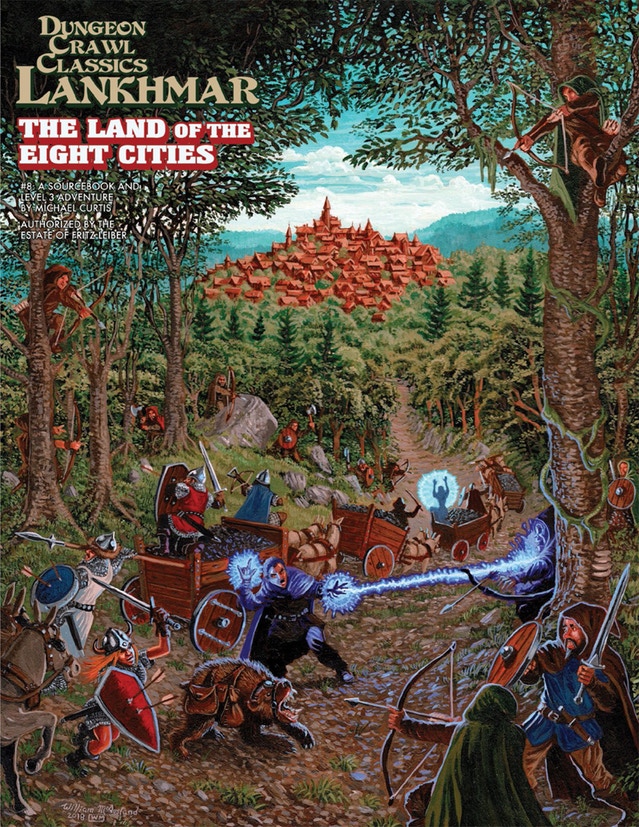 Goodman Games is thrilled to officially announce the latest news for the Dungeon Crawl Classics Lankhmar.

Allow us to present to you: Dungeon Crawl Classics Lankhmar #8: The Land of The Eight Cities, written by Michael Curtis with cover art by William McAusland.

North of Lankhmar lies the Land of the Eight Cities, a young realm lying in the shadows of the Great Forest and rich in natural resources. This barely-tamed wilderness is rife with opportunities for adventure and riches, but also contains hitherto-unknown dangers. Nevertheless, for adventurers who’ve worn out their welcome in Lankhmar, the Forest Land is a welcoming place to escape their enemies in the City of the Black Toga.

This work is based upon an unpublished manuscript written by Fritz Leiber, one never before seen outside of his personal papers and discovered during a research trip to the University of Houston library. For the first time in decades, new information, creatures, and even gods—all created by Leiber—are presented for use in your DCC Lankhmar campaign! You’ll find details on the people, places, customs, and history of the Land of the Eight Cities, as well as plenty of inspiration for adventures to place there. It’s the perfect resource for when the Thieves’ Guild is breathing down your players’ necks and they need a place to lay low!

Also included in this book is a report on the University of Houston research trip and select photos of the personal papers and possessions of Fritz Leiber, Harry Otto Fischer, and others housed in the university’s Special Collections department. These images and background information will interest fans of Leiber’s creative genius regardless of whether they are gamers, readers, or both. 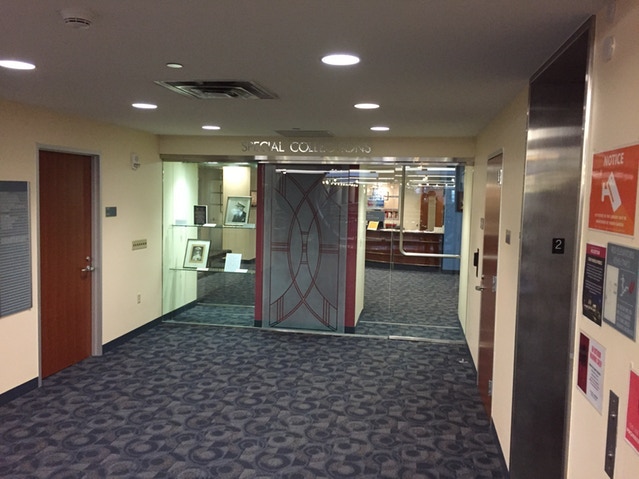 This sourcebook and adventure is directly inspired by Michael Curtis’ visit to the Fritz Leiber Papers Collection at the University of Houston, a trip that was funded by our Kickstarter for the upcoming release.

The main themes and details found in this work are based on Leiber’s own writings, some of which are difficult to find in print. The central premises and history of the Land of the Eight Cities are inspired by an unpublished draft produced by Leiber during the early evolution of the characters of Fafhrd and the Gray Mouser. Michael Curtis discovered this draft while undergoing research at the University of Houston, perusing the Fritz Leiber Papers Collection housed at the University library.

The unfinished draft is an early attempt to write a Fafhrd and Gray Mouser novel. It ends after 80 pages, but contains many of the ideas that Leiber would ultimately develop into The Swords of Lankhmar. However, there are a number of elements that never saw use in other Fafhrd and the Gray Mouser tales and have remained overlooked for decades. Once Michael finished reading this rough draft, the idea of writing a Land of the Eight Cities supplement sprang instantly to mind, utilizing material never before seen in the role-playing hobby. 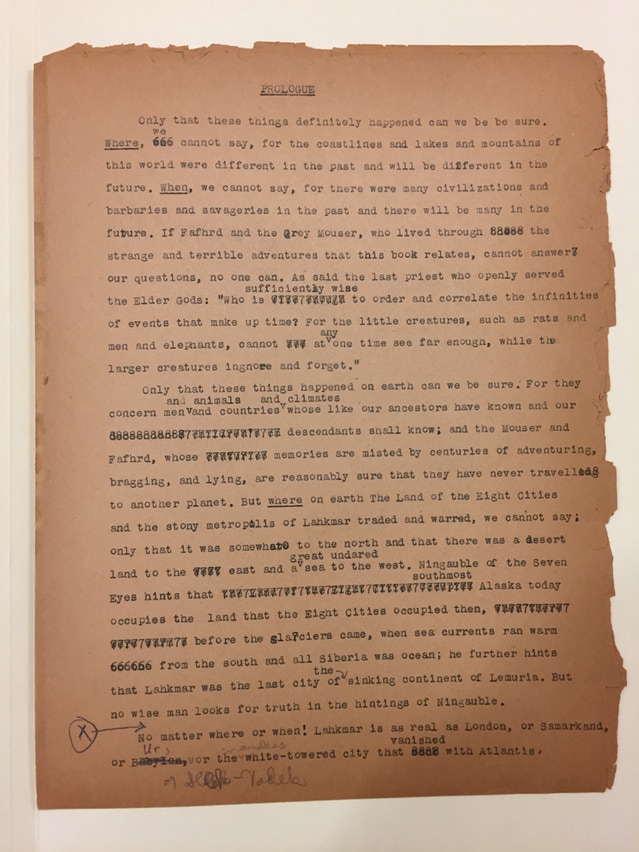 The unpublished manuscript on which this DCC supplement is based

Goodman Games is very excited to publish this supplement. As far as we’re aware, no other licensed Lankhmar game publisher has ever utilized material from The Fritz Leiber Papers Collection for their publications. Our goal is to publish the best Lankhmar RPG supplement ever. Leiber fans can look forward not just to this work of Lankhmar scholarship, but also to the most accurate Lankhmar maps ever published, and an extensive body of setting material and adventure modules that will enrich their tabletop experience.

Backers of the DCC Lankhmar Kickstarter will receive PDF editions of rewards within the next two weeks. Additional materials will follow and the project will go to press after Gen Con. We hope you are as excited about this news as we are!

All of the DCC Lankhmar materials will be available to retailers and the general public at a time after the print edition of the Kickstarter orders are fulfilled.