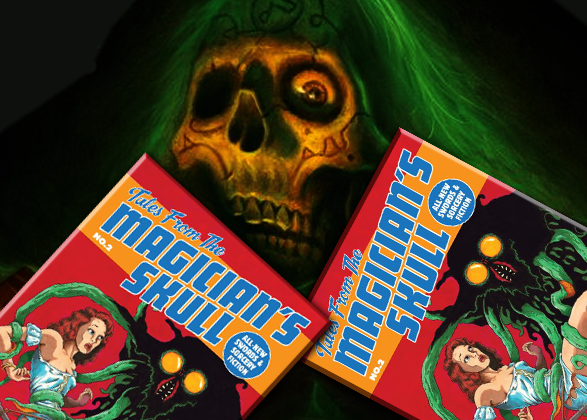 Attention Mr. and Mrs. Reader and all the ships at sea! This is intrepid investigator, Bart Felderson, reporting from the field! A recent outbreak at the local printing plant has officials investigating reports of a nigh-supernatural event allegedly involving a living skeleton of some sort. Screams of terror and disturbing bouts of laughter were heard coming from the building hours before we arrived on the scene. Several of the plant’s employees have been seen being removed from the facility, but their condition remains unknown. To find out the truth, I have decided to enter the building myself. This reporter promises to get to the truth of the matter, no matter the cost….

The Skull is back! Tales from the Magician’s Skull issue two is now at the printer, following up on the success of the first volume. If you were a Kickstarter backer for the magazine, you should expect to see your copy of Tales from the Magician’s Skull #2 showing up in the mail next month. The Kickstarter was a huge success, and we here at Goodman Games are currently looking into options for subscriptions to the ongoing issues. We’ll be sure to keep you up to date on that program, along with news about the second issue as soon as it arrives to us from the printer.

In the meantime, the reaction to the first issue has been great. Here’s an excerpt from the recent review on the Swords Under Distant Suns website:

“Overall, this is an outstanding magazine. … Not every story in Appendix N is Sword & Sorcery, and maybe some of the authors were going for the other influences in that list of books. [Appendix N] has invigorated a lot of interest in older and older-style fiction, so that is on the whole a good thing.”

Be sure to read the whole review on their website.

Also check out the blog of the magazine’s editor, Howard Andrew Jones, who is best friends with the Skull. He has posted many articles of interest to Skull readers, including a recent one on how the editorial process works.

You cannot stop The Skull. He is an unliving monster with a drive to complete a singular mission. So that sound you hear outside your window at night might just be a tree branch in the wind. Or it might be someone—or something—letting you know that your new magazine has arrived.

More info on Tales from the Magician’s Skull #2 coming soon!