The Chained Coffin: SOLD OUT! 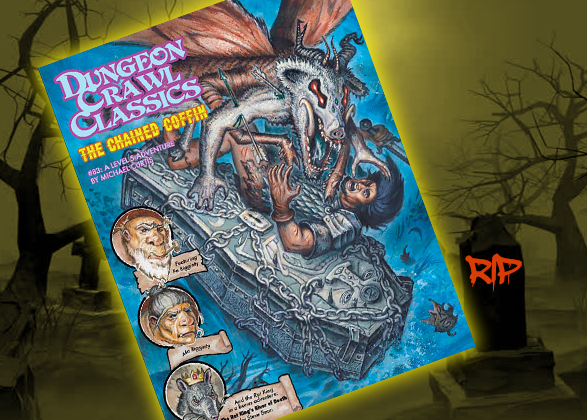 It seems so long ago. It was the first Dungeon Crawl Classics boxed set, an awesome publication that included the adventure The Chained Coffin, a number of other extra booklets, plus an amazing spinning-wheel puzzle. Fast forward several years, and DCC#83: The Chained Coffin is now sold out!

We have a handful of copies of the gold foil edition remaining, while the color edition and silver foil edition are completely gone. Over the years Michael Curtis has written a lot of supporting material for The Shudder Mountains, the setting of The Chained Coffin adventure, and some of that is also sold out! You can order what’s left through our Online Store, but get it while you can since it’s nearly all gone.

Do not despair. The battle against the infernal creatures plaguing The Shudder Mountains is far from over. As with so many other DCC adventures that have gone through a new printing, we are working on a revised printing for this project—although it’s a little more complex since it’s a boxed set and involves a custom spinning wheel.

Look for more information on the 2nd printing in the months to come!