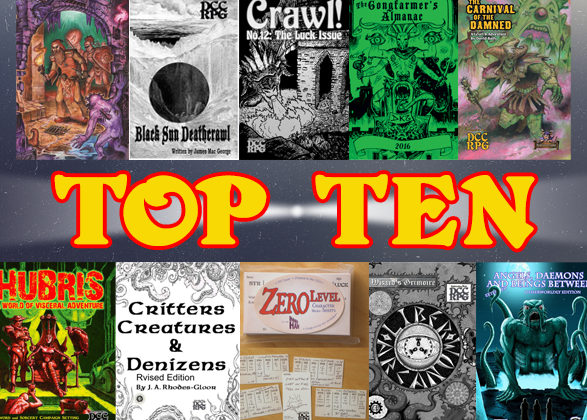 Yesterday we reminded you about our Third Party Publishing license. The license that allows anyone to publish supplements, adventures, and whatnot for Dungeon Crawl Classics and Mutant Crawl Classics. It’s a great way to show your love of the game, and to get that idea that has been poking at the back of your mind into print.

Today, we want to show you some great examples of folks who have done just that. These are the best-selling Third Party Published items, as seen by units sold on our website, of all time. If you haven’t checked out the offerings below, you definitely should. 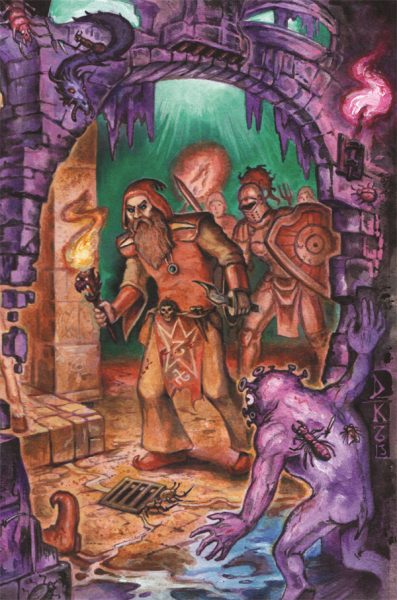 A reference booklet with all the commonly-used charts from Dungeon Crawl Classics. It’s a smaller book of charts, for those that don’t want to use the big book. Plus, it features new cover art by Doug Kovacs and interior illustrations by Stefan Poag. 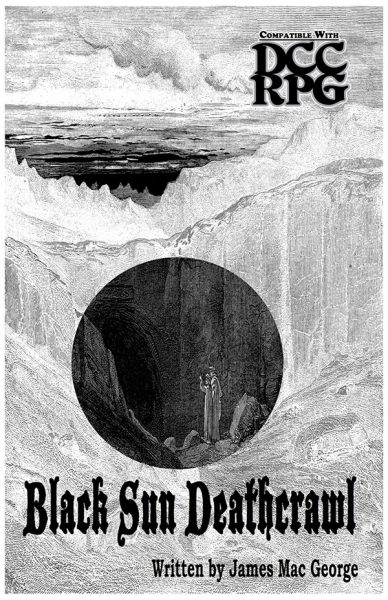 In this setting supplement for Dungeon Crawl Classics, the apocalypse is not merely nigh, it has passed. The world is over and all that is left are the crumbling ashes of the ages before and the cursed survivors who have yet to succumb to the soul-obliterating rays of the Black Sun. Make what you can of the little time you have left before the Black Sun renders your efforts meaningless. So, basically a light-hearted romp through the terrors of a nightmarish landscape for gamers.

And a tie-in product from Steve Bean Games that JUST missed hitting the top-ten list is Null Singularity, a stand-alone adventure space-horror-survival that is perfect for either DCC or MCC set in the world of Black Sun Deathcrawl. 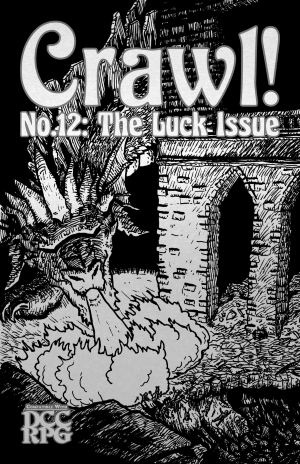 Crawl is the original zine for Dungeon Crawl Classics, so it being on this list is well deserved. The best selling issue in the series is Crawl #12, which focuses on the Luck stat and new ways that you can use it in your campaign. 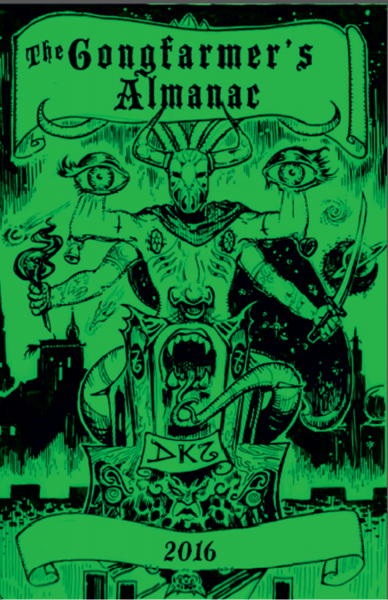 If you don’t know what a gongfarmer is, we’ll give you a moment to Google it….

Back? Okay, now that you have that nugget of information in your head, let’s talk about this zine! The Gongfarmer’s Almanac is written and produced by the community over on the Google+ page for DCC—which is one of the most active fan pages out there, if you didn’t now about it! Every year they put out a collection of all the articles that have been written over the course of a year and put them into one place for everyone to enjoy. 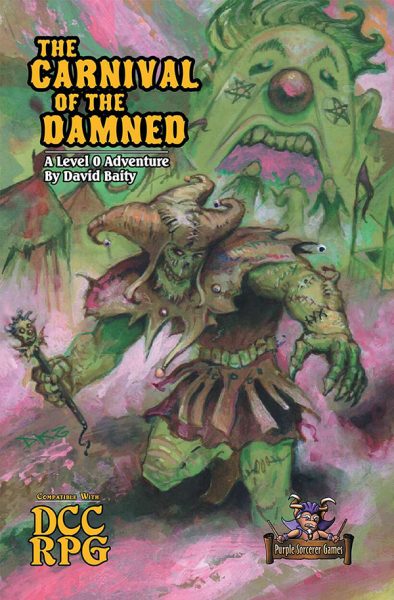 #5 – Carnival of the Damned

Everyone loves a carnival! The rides, the cotton candy, the games, and, of course, the clowns. Oh yes…the clowns.

Carnival of the Damned takes everything that is creepy about a carnival and puts it into an adventure that is meant to leave the players shuddering from…fun? Yeah, we’ll go with fun. This is a massive, 144-page adventure that can be broken up into smaller encounters if desired, all themed around a nightmare carnival that comes creeping out of the mist. Horror-adventure for everyone! 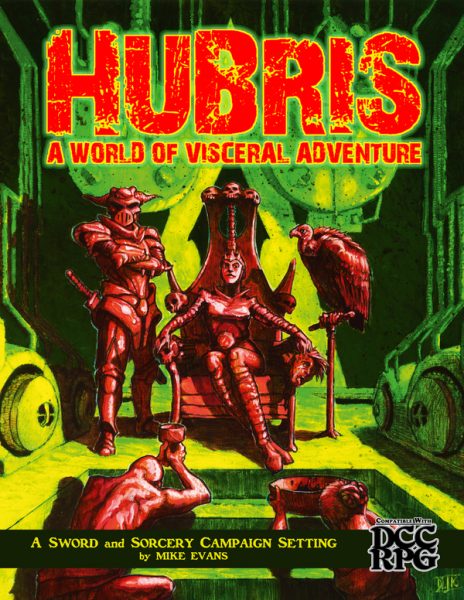 #6 – Hubris: A World of Visceral Adventure

Hubris is a campaign setting created specifically for Dungeon Crawl Classics. Plus, the creators made it totally hackable—meaning that you can pull out what you want for your campaign and put it where and how you’d like! There are 10 territories filled with tables and charts to generate interesting locations and encounters, new occupations, 4 new classes, 5 new playable races, 3 new spells, 4 new patrons, including 3 patrons spells for each, 11 new and terrible gods, 14 tables and charts for a GM to use to aid them in their game or create interesting/fun situations, two new adventures to kick off a campaign, and 51 new enemies (including enemies that are unique thanks to random generation). That’s a whole lotta material for use in one book!

Who doesn’t love a good monster? Critters, Creatures, and Denizens is a 300-page collection of monsters and other goodies to use in your campaign. 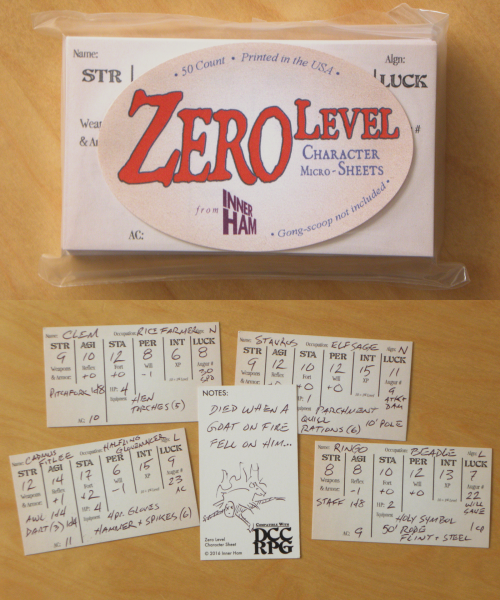 One of the most beloved aspects of DCC and MCC is the zero-level character funnel. The only problem is that the characters going into the funnel don’t have that great of a chance to make it out alive, and that can mean a waste of a whole character sheet. Enter the Micro Sheets. These are tiny character sheets with just enough info to get you started and through that opening meat grinder so that you can then move the survivors to a larger sheet to reflect their newfound status as an adventurer. 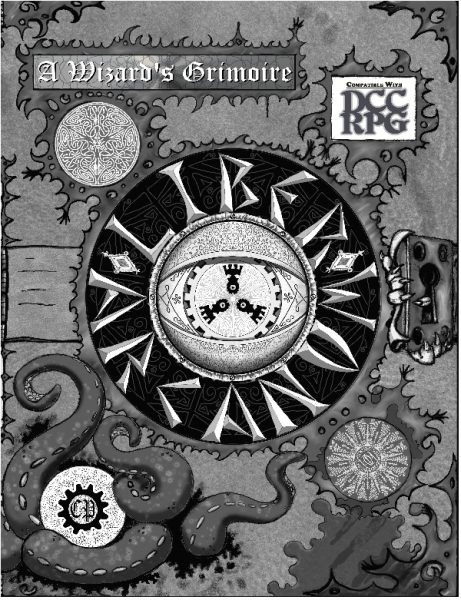 Liber Arcanum is a book that is meant for only two classes in DCC—wizards and elves. This 300-page tome contains new spells and patrons meant to enhance and expand the lives—however temporary or fated they might be—of both spell-casting classes. 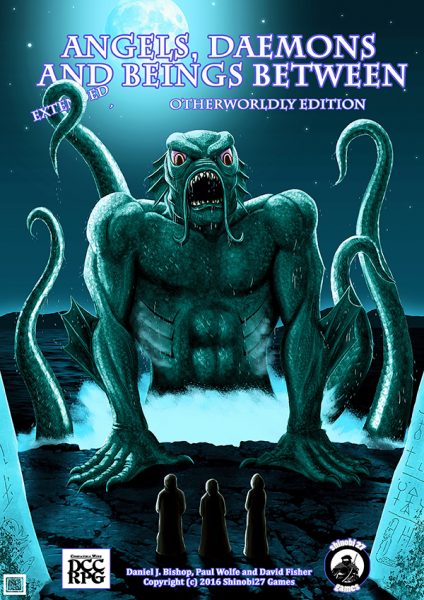 #10 – Angels, Daemons, and Beings Between

Patrons, patrons, and more patrons! Angels, Daemons, and Beings Between collects 24 fully-developed patrons to use in your game. To go along with these power beings are 66 new spells, more monstrous minions, and new spellburn and patron taint tables to use in your DCC campaign. There are a total of three covers for this volume, to boot: The Dagon Hardcover Edition, The Dagon Softcover Edition, and The Hecate Softcover Edition.

And on top of that, they’ve also produced a second volume, Angels, Daemons and Beings Between Volume 2 – Elfland Edition Hardcover, providing even more goodies for your campaign.

And there you have it! Those are the top ten best-selling Third Party Products of all time! And that’s just a sample of some of the great books that you can pick up in our Online Store. There are some amazingly creative minds at work, putting out new product all of the time. So head on over and check out the whole world of options that await!