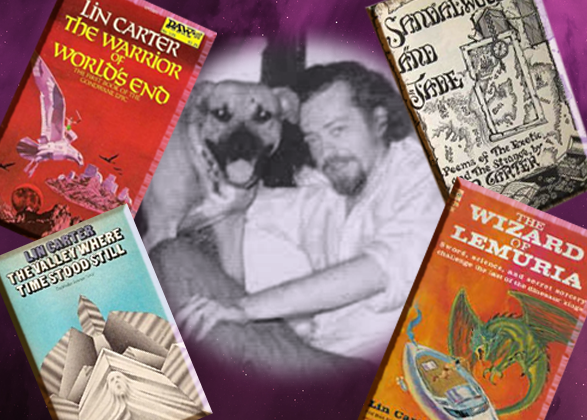 At Goodman Games we recognize the importance of Appendix N in the history of D&D and DCC. June 9 marks the 88th anniversary of the birth of Lin Carter, a prolific author with a small contribution to Appendix N. Here is some more information on this important writer. 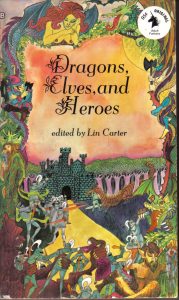 Linwood Vrooman Carter was born on June 9th, 1930 in St. Petersburg, Florida. In the august company of his fellow Appendix N authors, Lin Carter is a figure both of high esteem and some controversy. As an editor and critic, he is indispensable, most notably for his role in editing the landmark Ballantine Adult Fantasy series (BAFS), which ran from 1969-1974 and re-introduced such luminaries as Lord Dunsany, William Hope Hodgson, and Clark Ashton Smith to the fantasy-reading public. As the series gained traction, Carter also championed newer writers such as Joy Chant and Katherine Kurtz, whose long-running Deryni series was first published under the BAFS imprint.

On the other hand, as a writer Lin Carter has often been painted as a hack who was unable to transcend his many influences. He has also been slammed as an opportunist for his “posthumous collaborations” with Robert E. Howard and Clark Ashton Smith. These stories were presented as newly rediscovered works that Carter completed, but they were usually entirely new pieces derived from Howard and Smith’s unfinished drafts and story fragments. Lin Carter was hardly alone in this practice however, as he was following a precedent set in the 1950s by August Derleth and L. Sprague de Camp in relation to the works of H.P. Lovecraft and Robert E. Howard respectively. You get the sense though that Carter’s “posthumous collaborations” were just as much about getting to play with the characters and settings of his literary idols as they were self-promotion.

Where then does Lin Carter stand in relation to Appendix N and Dungeons & Dragons? He was first and foremost a superfan, starting from his discovery of Edgar Rice Burroughs’s The Master Mind of Mars as a boy. He became a voracious reader of science fiction and fantasy and was regular writer of fan letters to pulp magazines such as Startling Stories as early as 1943. Lin Carter’s short fiction and poetry began appearing in fanzines by 1949, much of it influenced by the otherworldly prose of Lord Dunsany. This progression from reader to commenter to full-on creator should be familiar to all dedicated RPGers. 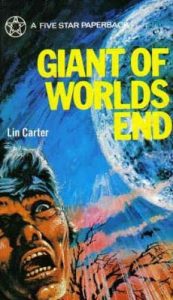 Lin Carter wrote unabashed homages to the writers he loved, but he delighted in re-combining his influences in novel ways. This was very evident in his only Appendix N-cited works, the World’s End/Gondwane Epic series. The series starts with Giant of World’s End (Belmont Books, 1969) and is set 700 million years in the future when the continents have drifted back together into the supercontinent of Gondwane and the Moon has fallen in its orbit to the point where it will soon collide with and destroy the world. The World’s End series sits squarely in the Dying Earth fantasy sub-genre epitomized by Clark Ashton Smith and Jack Vance but it is also full of sly allusions to L. Frank Baum’s Oz books. It’s not clear if Gary Gygax ever read let alone liked any of Lin Carter’s work beyond the World’s End series, but what probably appealed to Gygax the most was the crazy-quilt setting’s wide-open sense of possibility.

The setting and monsters were also the main attraction of Carter’s breakthrough Thongor of Lemuria series, which started with The Wizard of Lemuria (Ace Books, 1965). The Robert E. Howard/Edgar Rice Burroughs hybrid series is set 500,000 years in our past on the lost continent of Lemuria and features protagonist Thongor of Valkarth battling to free humanity from the dinosaur-descended “dragon kings.” Imagine Conan the Cimmerian adventuring on Barsoom and you get the picture. 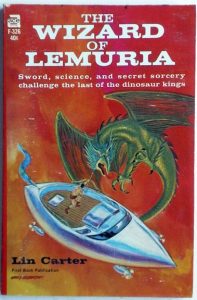 Carter could never quite shake Burroughs’ hold on his imagination—his Callisto series is his most straightforward take on sword and planet storytelling, the Green Star series adds some of the lush exoticism of A. Merritt, the Zanthodon series echoes the Pellucidar series, and The Mysteries of Mars series brings in the darker tones of Leigh Brackett and C.L. Moore.

Clearly there was a lot of overlap between Gary Gygax and Lin Carter’s literary influences and it’s also interesting to note that the rough contemporaries shared many traits: they were avid world builders and cartographers, eclectically self-educated, fond of demonstrating their erudition, and were noted raconteurs. 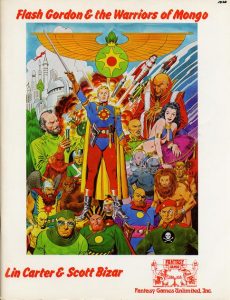 There’s no evidence that Lin Carter was ever an active gamer, but he did find time among all of his other commitments to write the setting material for the wargaming rules Royal Armies of the Hyborean Age: A Wargamers’ Guide to the Age of Conan (1975) as well as the quasi-RPG Flash Gordon and the Warriors of Mongo (1977), both of which were published by Fantasy Games Unlimited. The gaming industry was never lucrative enough to lure Carter away from fiction writing, but it’s fun to imagine him as an RPG setting designer—he’d be an exemplar of today’s remix culture.

In the end, Lin Carter’s works never surpass the quality of his major influences such Burroughs, Robert E. Howard, H.P. Lovecraft, and Clark Ashton Smith but they’re quite entertaining in their own right and move along at a good clip. The somewhat cobbled together nature of Carter’s writing makes it easier to pull out the eminently gameable bits that would be harder to extract from more original, dramatically unified works. If you’d like to check out Lin Carter’s books, many of them are available from Wildside Press in print and ebook form and can be found on Amazon.com. Better yet, original Lin Carter paperbacks can be found on eBay for a mere $5-$10 each.