Hide! Grimtooth is Coming! And This Time He’s Bringing Trapsylvania! 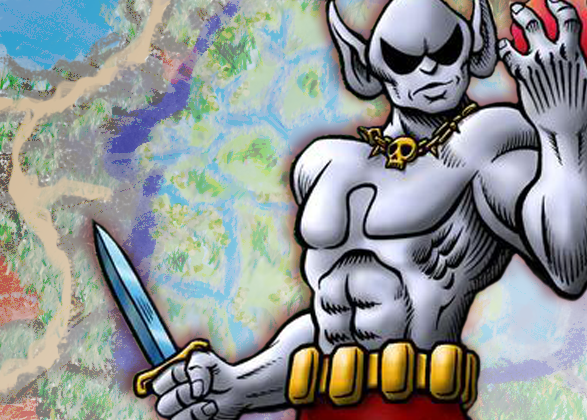 Listen up, puny humans! Grimtooth the Troll here. You sorry souls have been dying from my traps for decades. And in all that time, not one of you miniscule mortals has attacked me in my lair! Well, I’ve decided to take pity on you. For the first time ever, I’m going to show you my realm. You’ll finally get to see…Trapsylvania!

For the uninitiated, Grimtooth’s Traps are a series of books that first appeared in the fabled days of yore (that’s 1981, if you are into numbers), presenting a series of system-neutral traps that were innovative and oftentimes hilarious—and just as frequently quite deadly. The question has remained over the years, however: just where does this “Grimtooth” come from? And why is he so obsessed with all these traps?

As announced last year, Goodman Games is publishing Grimtooth’s Trapsylvania! This is a campaign sourcebook designed to give a home to all of those lovely traps, and a history to Grimtooth (and his lovely sister, Grimtina), so that you have the appropriate context needed to run your happy fun-time campaign!

Grimtooth’s Trapsylvania will be funneled (see what we did there?) though a Kickstarter campaign that will be coming soon, but we can give you a glimpse of it here while providing some more information about what Trapsylvania is all about! Let’s check out that exerpt! 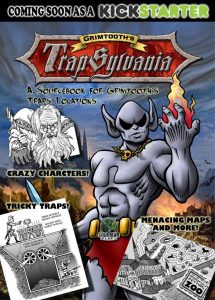 For over 30 years, Grimtooth’s numerous Traps books have horrified players and inspired game masters with hundreds of dangerous devices, deadly deathtraps and hilarious hijinx! Now Grimtooth (with a little help from kid sister Grimtina) will take you on a personally guided tour of his realm and the central hub of his vast Traps empire.

Run your own Grimtooth campaign, or pick and choose locations you can use in your own adventures. Explore Grimtooth’s caverns, visit his Inner Sanctum, escape the Deathmaze Testing Center, attend Warthog’s School for Trolls, take a ride on Grimtooth’s Airship, tour Grimtina’s Petting Zoo or get lost in many more gigantic places of doom, like the Infinite Corridor of Hallways. Each of these infamous locations includes maps, descriptions, non-player character details, scenarios, and lots of art. Plus there are more traps (of course) and plenty of things with which to endanger your characters.

Like all Grimtooth books, Grimtooth’s Trapsylvania is written in a systems-neutral format, and published in a way that it is fully compatible with the Dungeon Crawl Classics Role Playing Game (DCC RPG). A series of appendices at the back provide quick and easy stats for DCC RPG games, covering all the creatures, characters and items described in the book. It’s very easy to fill a graveyard with the corpses of your DCC player characters! (Because once you enter Trapsylvania – you won’t leave! Suckers.)

Trapsylvania is written and illustrated by S. S. Crompton, the legendary “voice of Grimtooth” who has been working on Grimtooth products for Flying Buffalo for more than 30 years. We’ve rounded up the entire roster of historical Grimtooth contributors to illustrate the book, so you’ll find art not just by S. S. Crompton, but also by Liz Danforth, Micheal Von Glahn, Scott Jackson Phil Longmeier, and Jeff Dee—all the artists who have contributed to Grimtooth products over the years! The new traps are written by Grimtooth alumni S. S. Crompton, Ken St. Andre, Bear Peters, Rick Loomis, Paul O’Connor, and Debora Kerr. The DCC stats are provided by Terry Olson, with editing by Jen Brinkman.

There you have it! A snapshot into the upcoming Grimtooth’s Trapsylvania Kickstarter. It’s sure to have you dancing in the hallways—now make a DEX saving throw or take 37 points of damage, one for each year since the first book released. It can’t be helped. You walked right into that one.

Now let’s take a look at more of that art we were talking about! 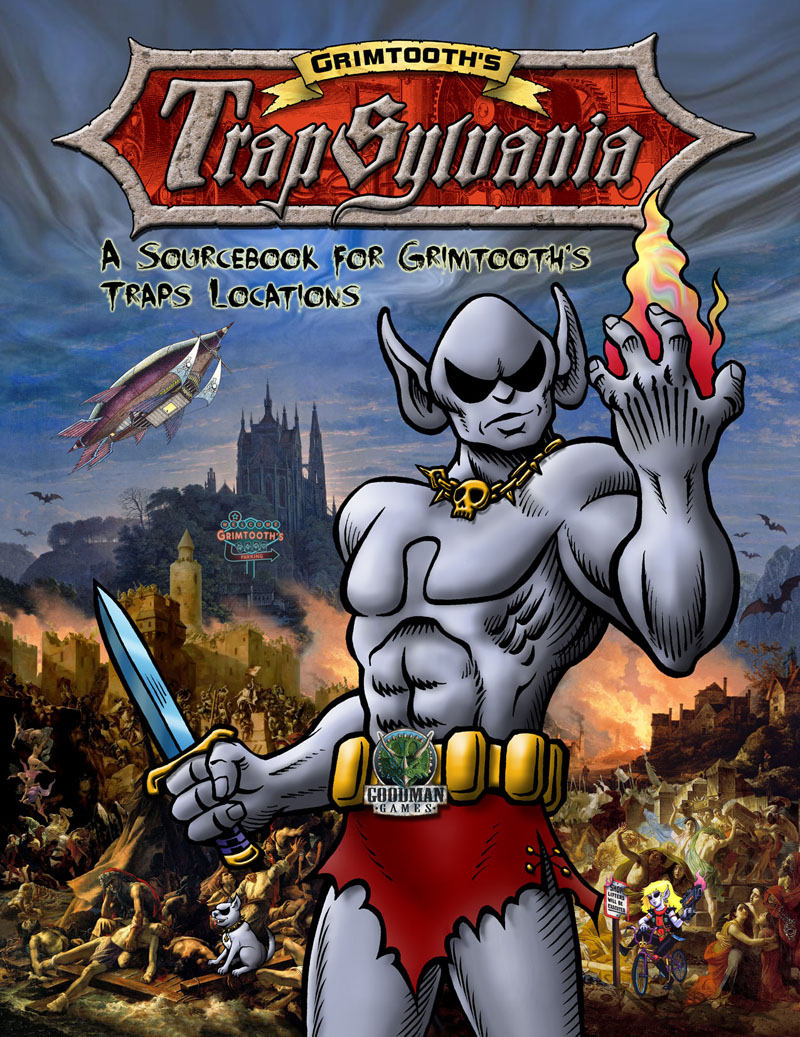 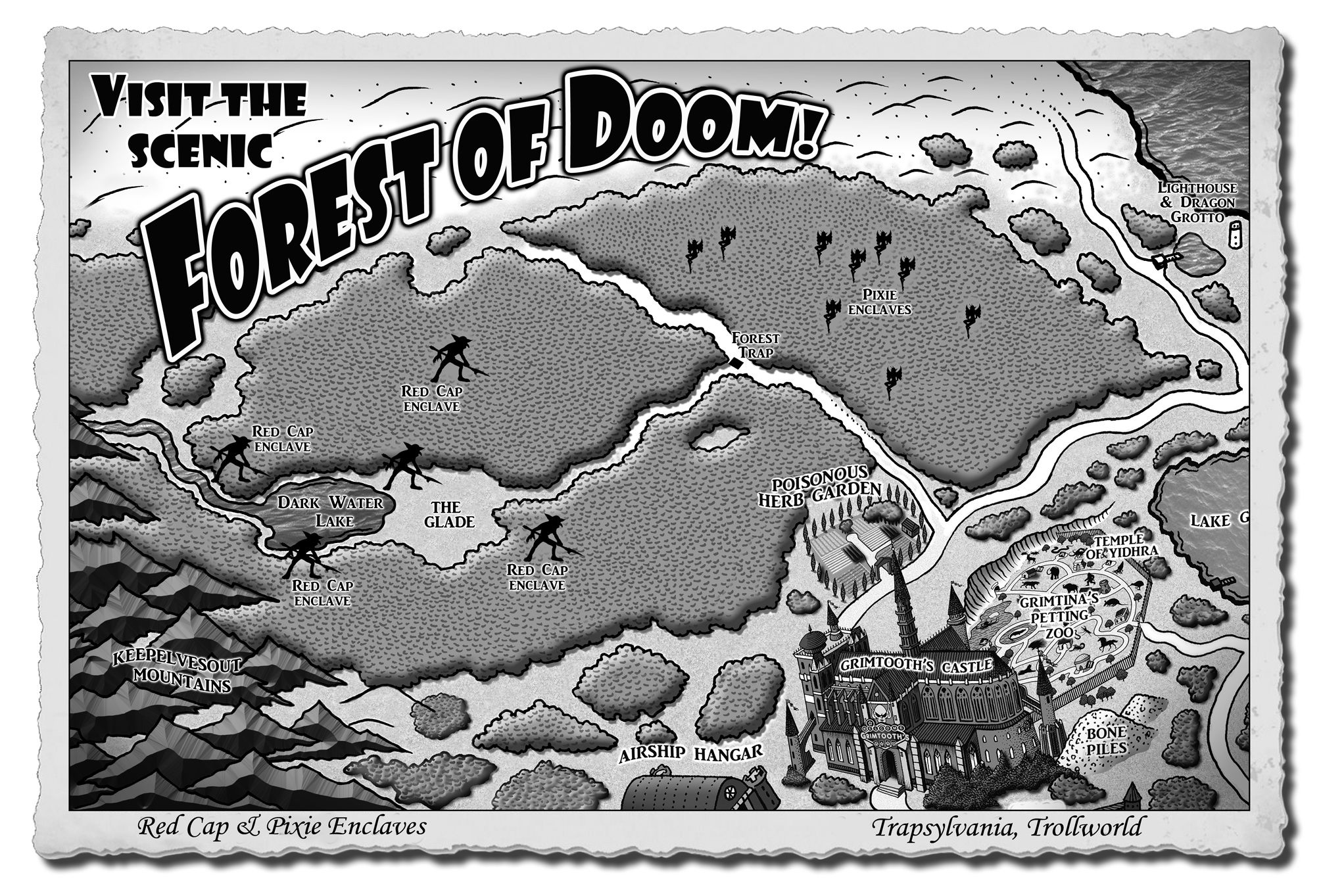 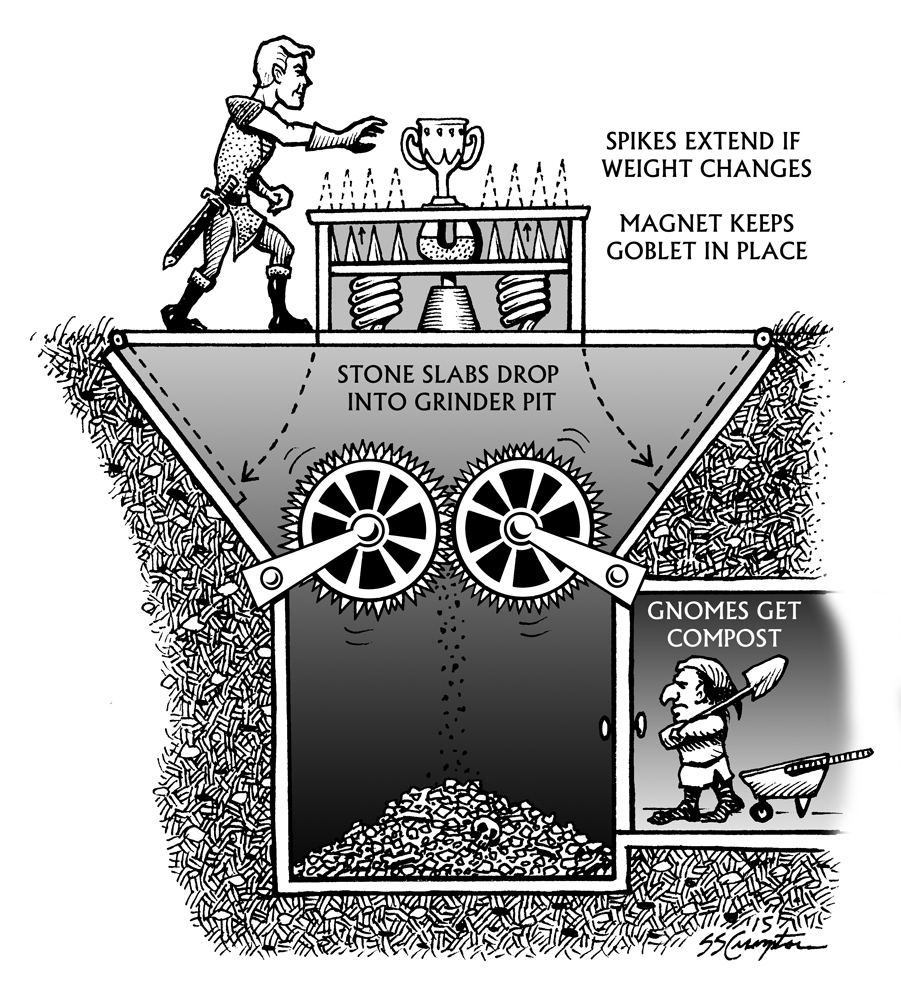 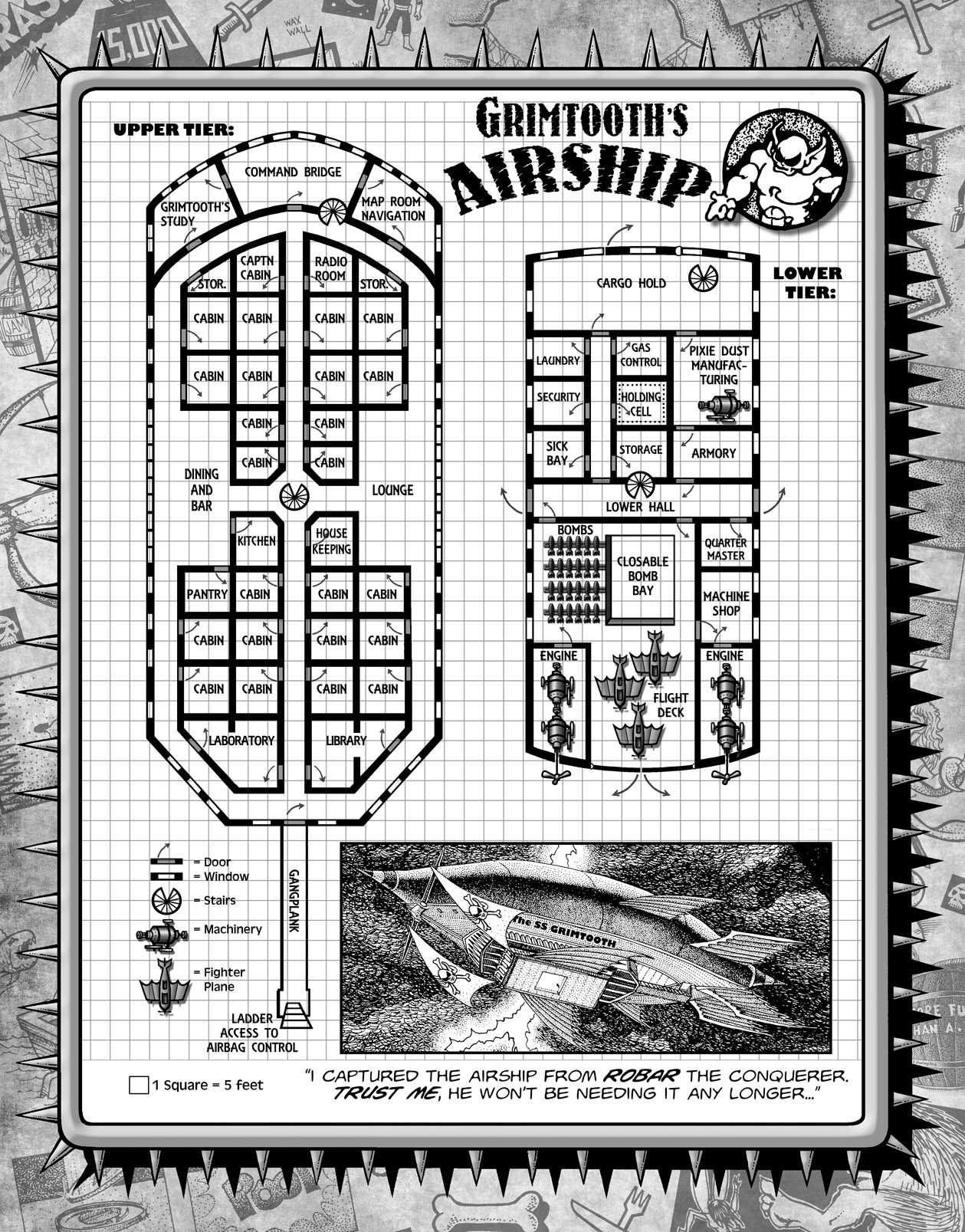 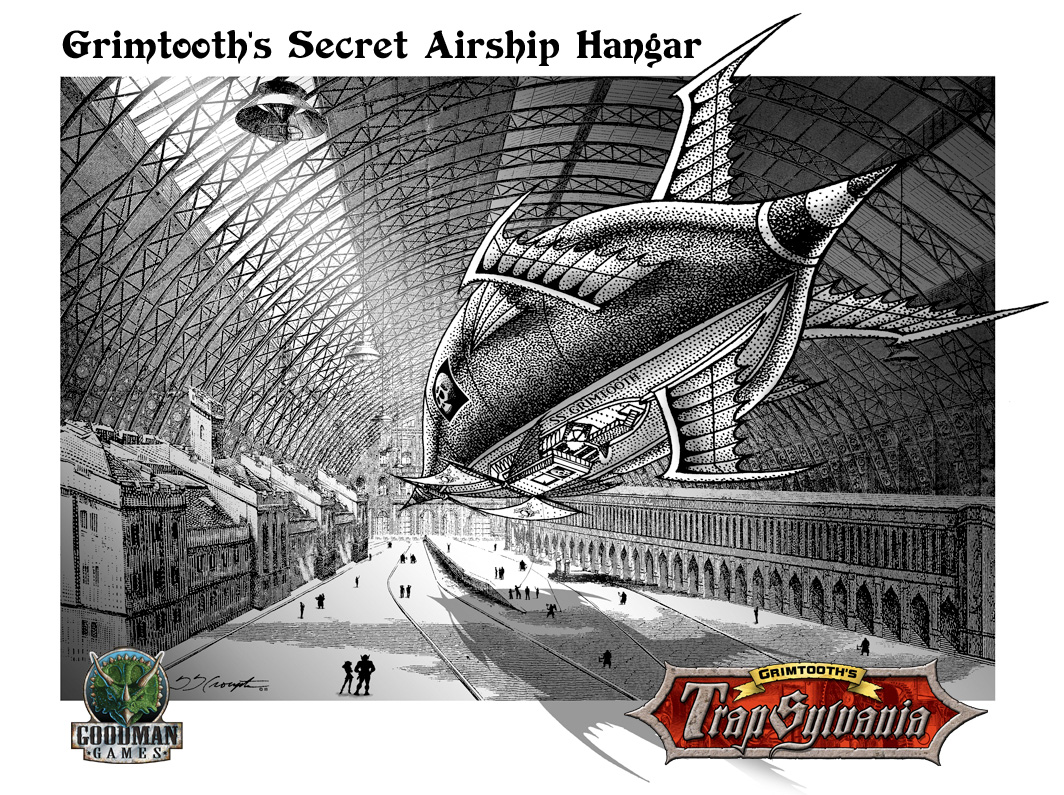 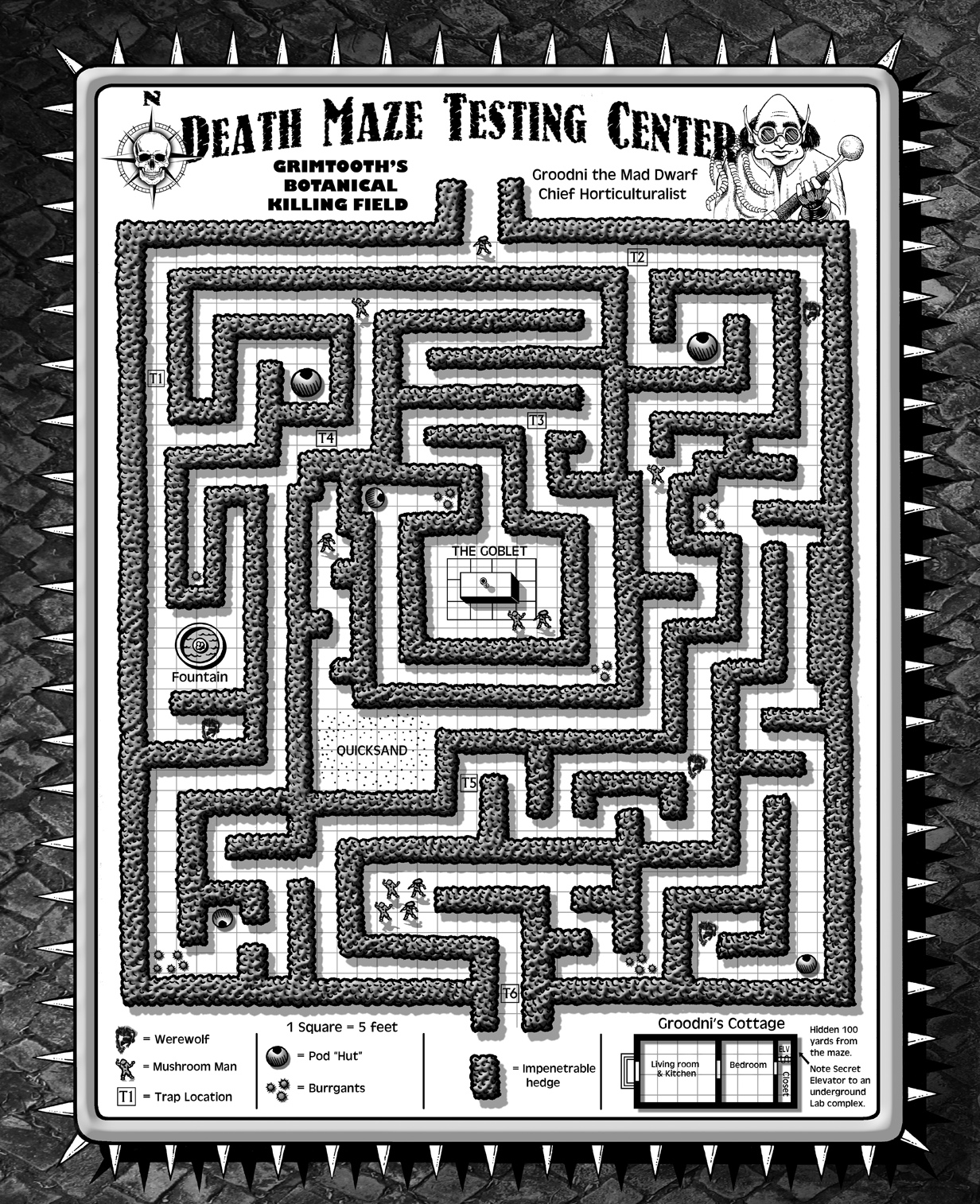 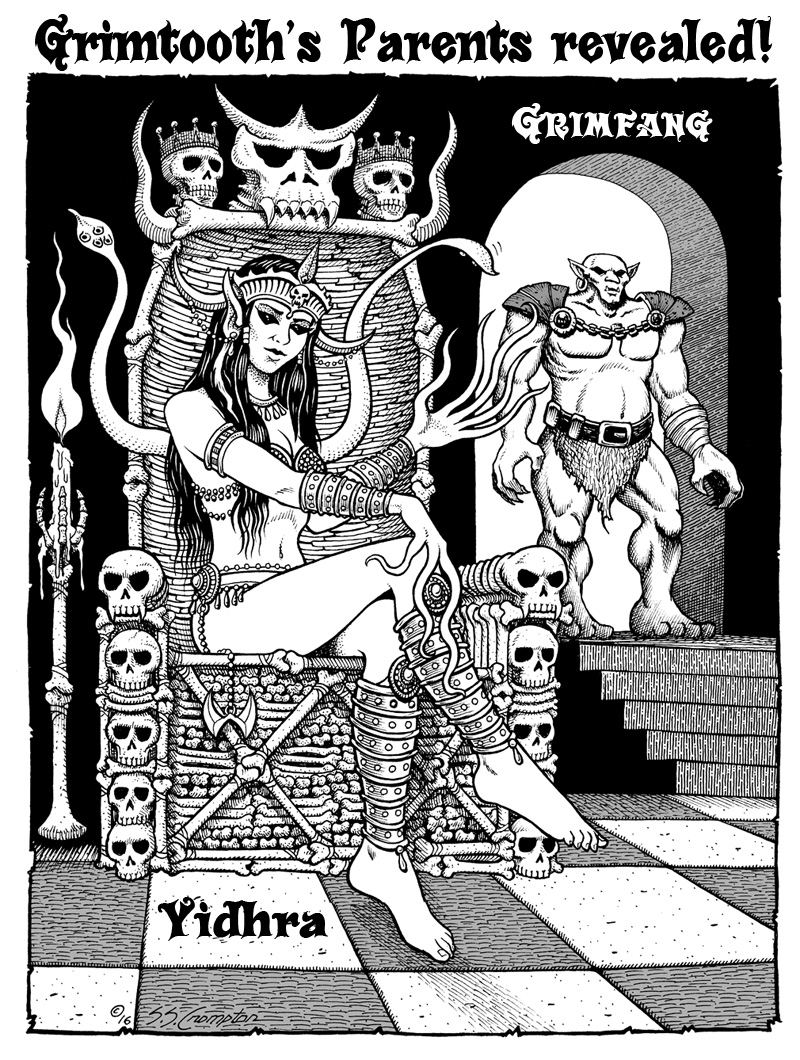 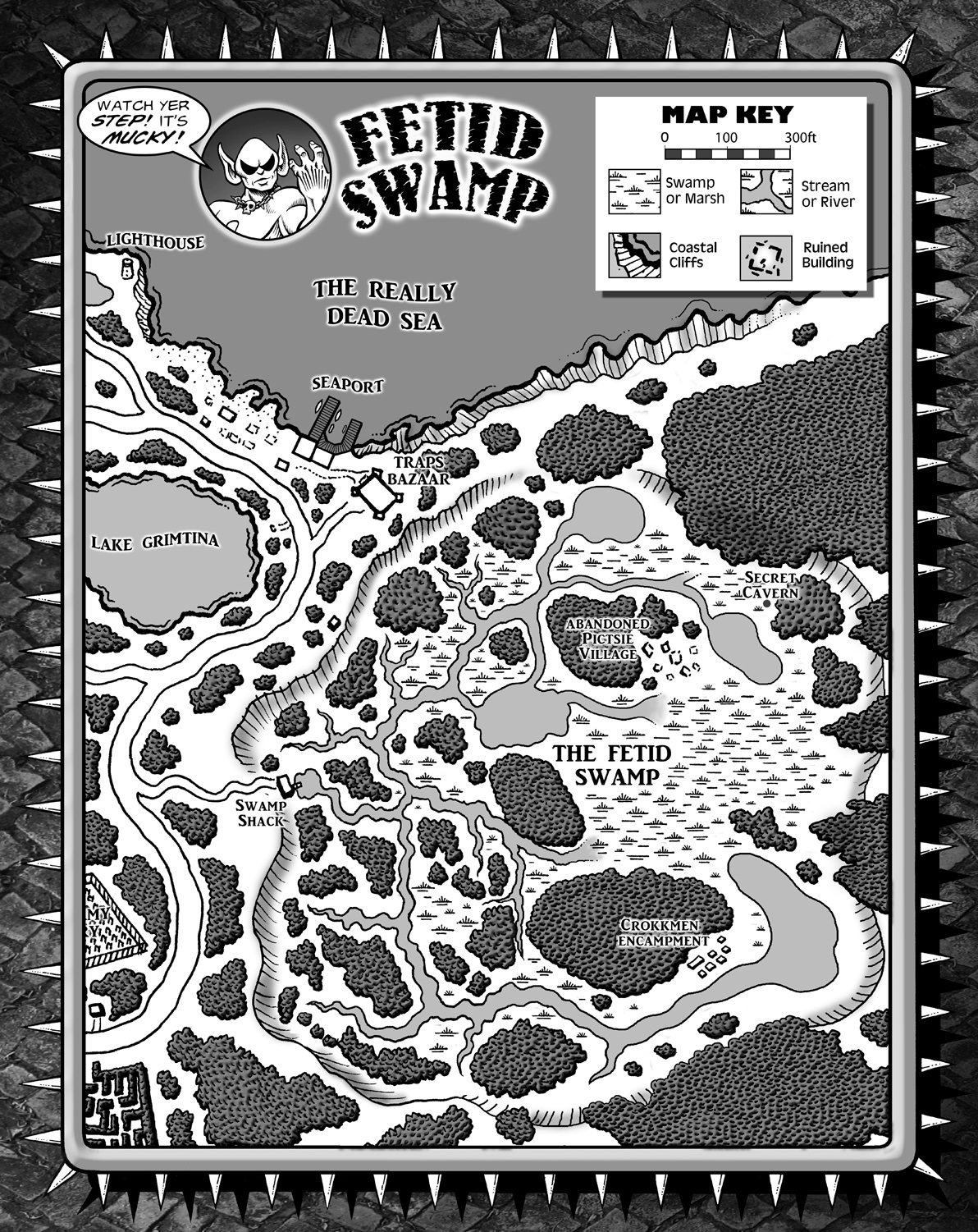 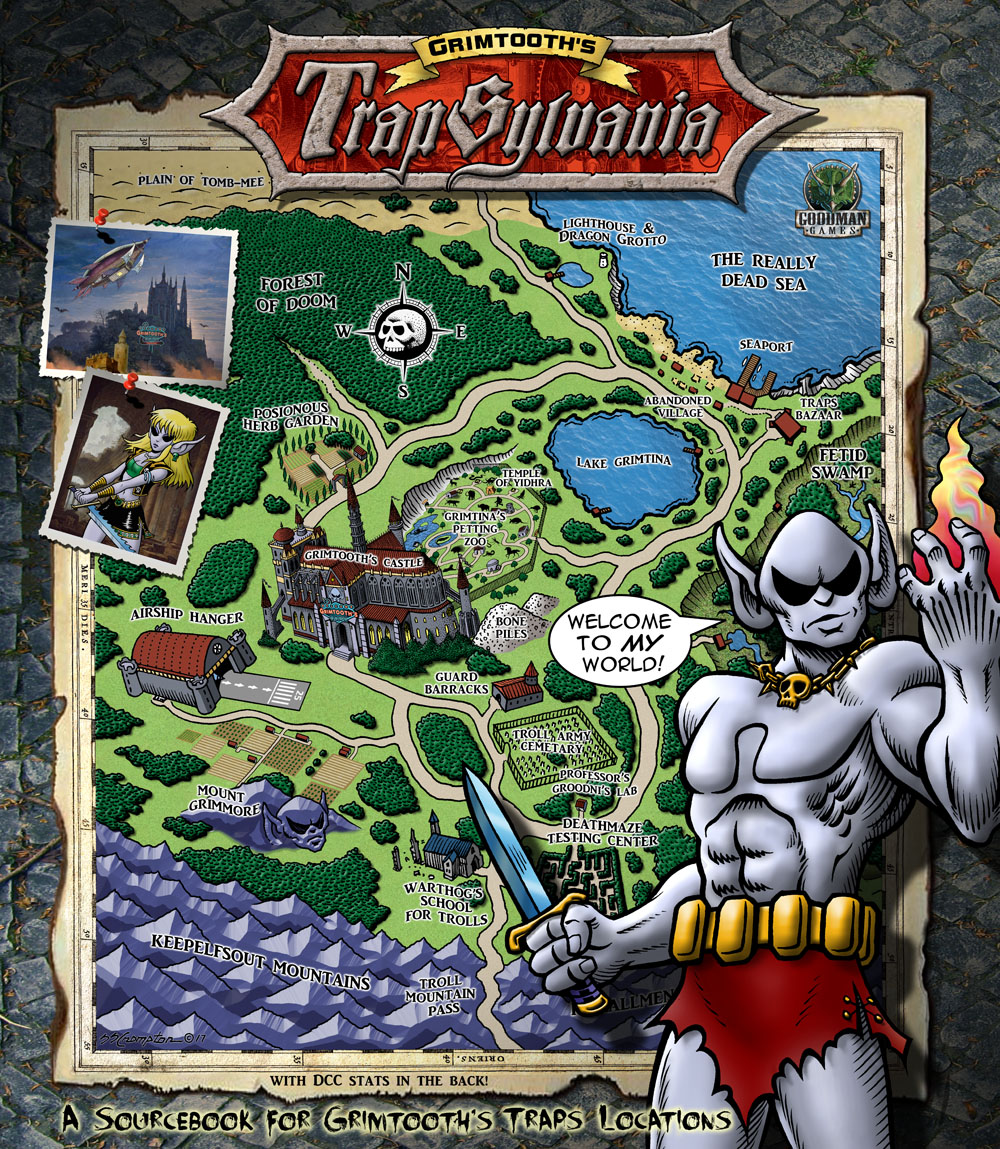