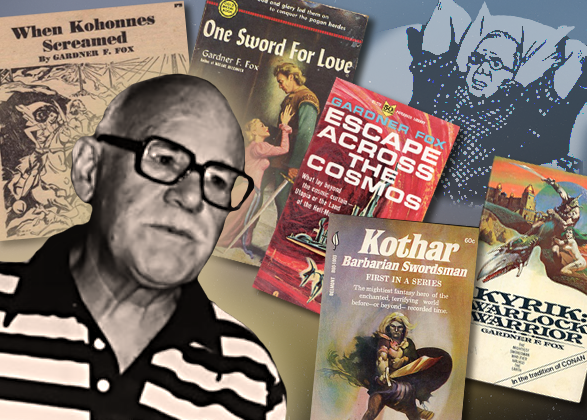 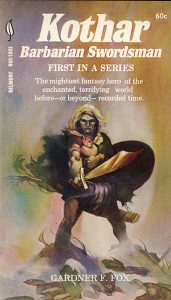 Today is the birthday of Gardner F. Fox. Most people know him as the legendary and prolific writer for DC Comics who created the Justice Society of America as well as many of the most iconic DC Comics characters including Doctor Fate, the Flash, Hawkman, and Sandman. He also wrote many of the earliest Batman stories and was the first to introduce the Batarang. His contribution to the world of comics is well documented and uncontested.

But when people see his name on the list of Appendix N authors, there’s often no recognition of his name as a writer of fantasy. He has passed into relative obscurity for contemporary fans of the genre. It is not surprising considering that he is best known as the author of the Kothar books (discounted by many as a cheap knockoff of Conan) and the Kyric books (a likewise discounted knockoff of Elric). Paperbacks like Kothar Barbarian Swordsman often littered the shelves of 70s and 80s bookstores beside similar fare like Brak the Barbarian and Thongor of Lemuria. So why does the Appendix N specifically suggest that we read:

Stick with me kid, and I’ll show you why.

First off, what is a lich? Ask any fantasy enthusiast and they will tell you it is a powerful undead wizard. Well that wasn’t true before D&D. The word “lich” was just an obsolete word for “corpse”. But in Kothar Barbarian Swordsman, Kothar meets an undead wizard named Afgorkon (who casts healing spells… just sayin’….) and he is described as a lich. After reading this story, Gary Gygax added the lich to the 1975 Greyhawk supplement and it has been a focal point of the game ever since. Afgorkon is also a great example of a patron in Dungeon Crawl Classics. He is a powerful entity who exists out of time and he offers help in exchange for services, but his requests are never as simple as they seem….

Reading the Kothar books beside more literary inclusions in Appendix N like The Lord of the Rings, The Blue Star, or King of Elfland’s Daughter definitely show that Kothar Barbarian Swordsman is no piece of great literature. Sometimes we want Citizen Kane and sometimes we want The Evil Dead. Kothar is like the latter because it’s fun, thrilling, fast-paced, frothing with creativity, and when you laugh you know the author is laughing with you. 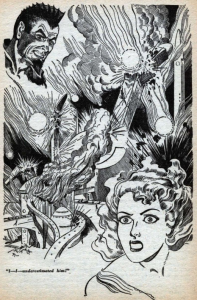 His willingness to adopt different identities can have pretty hilarious results. For instance, look at the academic introduction to Kothar Barbarian Swordsman, written by Donald MacIvers, Ph.D. He talks about the great importance of the work and relies heavily on quotes from “a German philosopher no longer widely read” named Albert Kremnitz. It reads much like many of the Lin Carter introductions in the Ballantine Adult Fantasy series or the L. Sprague de Camp introductions to the Conan paperbacks. Googling Donald MacIvers, Ph.D and Albert Kremnitz yields no results. Likely, he wrote it himself, lampooning the trend of grandiose and self-important introductions. Knowing that his tongue is most definitely in his cheek, it makes reading the rest of Kothar even more enjoyable. Here is an author whose affection for the genre leaps off the page like Kothar leaping from a rocky crag, yet it is clear that he isn’t taking any of this too seriously.

Fox is also one of the authors to have an “et al” following the recommended titles. This leads one to believe that the recommendation is for us to read the rest of his body of work, in addition to the five Kothar and four Kyric books. Warrior of Llarn, Thief of Llarn, Escape Across The Cosmos, and The Hunter Out of Time all appear very much within the scope and I’m excited to getting around to reading those as well. 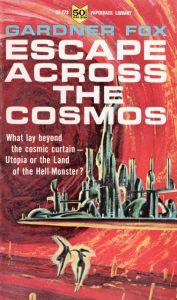 His works rarely made it beyond the single paperback printings they received in the 60s and 70s which also adds to his modern obscurity as a writer of speculative fiction to modern readers. In order to read his works, The Gardner Francis Fox Adventure Library is revising his titles and selling them as ebooks and paperbacks through amazon.com. But nothing beats holding one of the old paperbacks in your hands with those beautiful Jeffrey Catherine Jones covers, which are easy to find on eBay for $5-$15 a book.

Summer is fast approaching. If you are looking for something fun to read at the beach (or on the couch with the AC blasting) then I would heartily recommend picking up Kothar Barbarian Swordsman. It isn’t going to change your outlook on life but it will introduce you to great characters, take you through wildly entertaining adventures, and is guaranteed to inspire you to lift whole sections of it to drop it into your game.