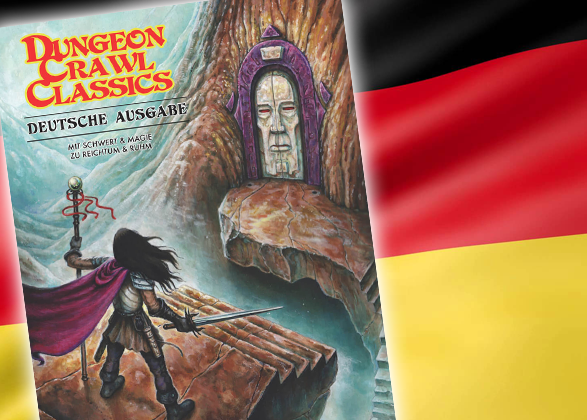 DCC RPG continues to take the world by storm!

We have previously announced authorized translations into Spanish and Portuguese. (You can even buy Spanish-language editions in our online store!) We’re very excited to report that at The Role Playing Convention in Cologne, Germany, this past weekend, German Publisher System Matters Verlag announced our agreement to publish Dungeon Crawl Classics in German! Here is the official announcement, which you can also read here. You can find more information on German DCC on the System Matters web site.

We look forward to reading DCC in German! 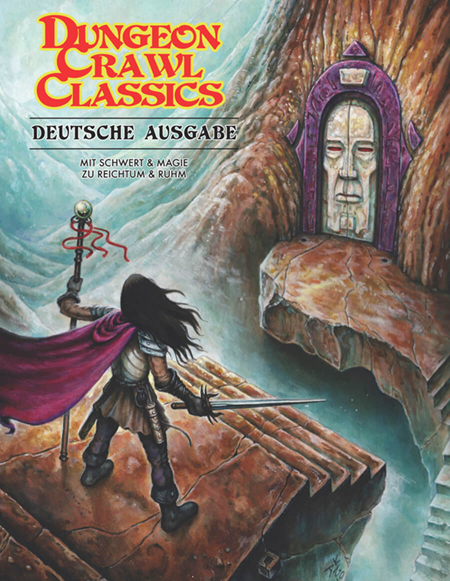 System Matters Verlag is happy to announce that it will release Dungeon Crawl Classics in German language. We are big fans of the game and consider it one of the best designed systems on the market. The role-playing landscape would be poorer without Dungeon Crawl Classics and so it is a special pleasure for us to bring the game to Germany.

We all remember the time when we sat in our parents’ basement and fought, together with our friends, against mysterious monsters, explored unsafe vaults and defied uncanny dangers. Dungeon Crawl Classics brings this “Sense of Wonder” back to the table by referring to its origins.

The basis of Dungeon Crawl Classics is the “Appendix N”, the famous bibliography in which Gary Gygax lists which stories inspired him in his game development. Fantasy masters like Robert E. Howard, Jack Vance, Michael Moorcock and Fritz Leiber are gathered here. Goodman Games, the publisher of the original American edition of Dungeon Crawl Classics, has spent years working on it and conducting game tests to bring the special atmosphere of these stories into a set of rules full of excitement and surprises. The characters will talk to gods, defy ancient magic and face unknown monstrosities before they even reach the first level. All magic is powerful and chaotic. No magician can control it completely. On the contrary, magic changes the magician himself and some spells can get out of control.

The players start with several level-zero characters and move them through their first dangerous adventure. Only those who survive – and this is not easy – advance to the first level. The characters do not have the luck of heroes to count on. They are adventurers and must earn their heroic status. And if they don’t want to be heroes, they can accumulate power and money and pursue their own goals.

System Matters Verlag also plans to translate the adventures of Dungeon Crawl Classics. The adventures are among the most entertaining modules there are today. You will not find standard monsters. Death could be lurking behind every door. Nobody has to wait until higher levels to experience the good stuff. Dungeon Crawl Classics takes off immediately: Beastmen, magical temples, angry beasts and lying demons threaten the characters with malicious deviousness.

Work on the basic rules is in full swing. We hope to release the core rulebook in late 2018. We will inform you on www.dungeoncrawlclassics.de and www.system-matters.de when pre-order starts. We hope to find many fans who will be as enthusiastic about Dungeon Crawl Classics as we are. Two adventures are included in the book. Further adventures will appear either simultaneously or quickly after the publication of the basic rules. We are also planning a podcast series with helpful episodes on rules and tips.

We hope you are as excited as we are!