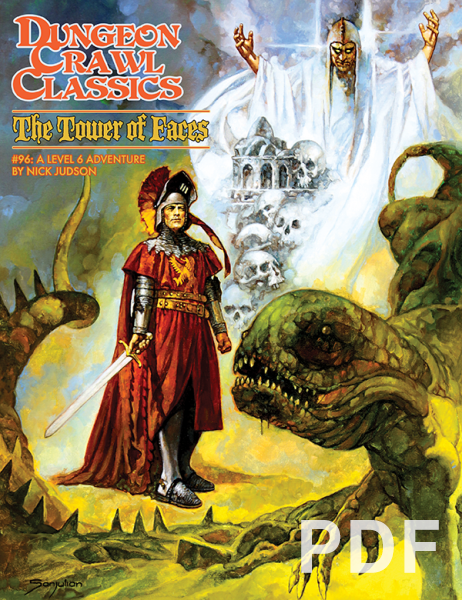 Want an adventure that is an award-winner? Want one that has a fantastic challenge for your 6th-level characters? How about one that has an amazing cover by acclaimed artist Sanjulian? Now, how about getting that module as a PDF?

DCC #96: The Tower of Faces has been released as a PDF through our online store! The winner of the 2016 Rodneys Award, OSR Track is a challenge for characters and a blast for players.

The adventurers have been summoned to a mysterious black tower made of glass. They are given a simple mission: protect the mage’s estate while he is distracted weaving a mighty spell. Surviving the five days of his spellcasting requires quick wits and sharp blades, for the estate has mischievous guests and strange visitors. In the end, the mage demands one final task: stand by his side as he binds a great horror from beyond!

Sound easy? Yeah…not so much.

Writer Nick Judson did such an amazing job with this module that it has been translated into Dungeon Crawl Classics system, and we put the aforementioned stunning cover by Sanjulian on the outside and some dynamic cartography by Stefan Poag on the inside! Act now (or later…it’s going to be there) and get the Random Drop Die Table included as a part of the PDF!

Head on over to our PDF Store and pick up your copy of DCC #96: The Tower of Faces today!