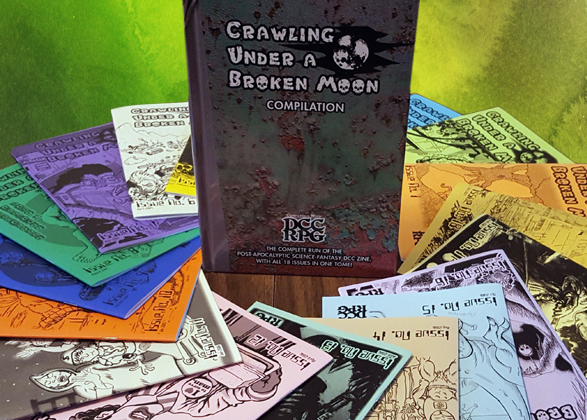 Goodman Games is proud to showcase our amazing Third Party Publishers, and we want to give each of them a moment to shine. That’s the reason for our Community Publisher Profiles. This time up, we’ve got Reid San Filippo of Shield of Faith Publishing!

“Foretold in the ancient calendars, early in the 21st century a rogue object from deep space hurtled near the Earth and struck the Moon. Its impact caused catastrophic destruction around the globe, ripping the very fabric of time and space itself; yet mankind still survived. Centuries later, the planet is reborn… a strange new place of alien wonder and death: a world ruled by savagery, cruel sorcery, and twisted science. Now is the time for the mighty to rise up and take their place in this perilous and untamed land. Will they bring justice or suffering? Only time will tell…” 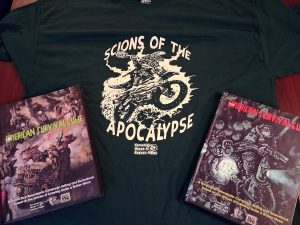 The Umerican Survival Guide, written by Reid San Filippo, contains a gonzo sword, sorcery, and science post apocalyptic setting which uses the amazing Dungeon Crawl Classics rules, with a few new twists. Within this irradiated tome you will find a dozen new or revised character class options, new piecemeal armor system that incorporates damage resistance and armor degradation, an extensive mutation system usable by all characters and creatures, an vehicular creation and combat system for all of your petrolhead needs, a pantheon of Umerican Gods and Patrons, a comprehensive section on the Citadel of Scrap – the largest civilized city in Umerica, and dozens of random tables covering aspects of everyday wasteland life, finding salvage, and adventure creation plus much, much more! This 286-page tome is available in softcover, hardcover, and PDF formats and has two beautiful covers to choose from, the Chase cover or the Delve cover.

Where did the weird world of Umerica come from? Let me tell you a story about a man named Reid…

I was born in Elkhorn, WI in the early seventies. Both my parents loved sci-fi and fantasy and some of my earliest memories were of them reading novels. When I was about four my dad took me with him to the next town over when he went to meet with a potential new accounting client, Gary Gygax. Once Gary found out my dad was into fantasy stuff, he tried to recruit him into his gaming group. While my dad was not interested in either the group or accounting work, I was and Gary’s descriptions of D&D set fire to my young imagination. Much to my dad’s chagrin, I never stopped asking for a set of D&D rules. I even made up inane and illogical little dungeon crawling games all on my own using graph paper we had around the house and parcheesi dice. Finally he gave in when I was in junior high and I got the Frank Mentzer redbox. This was quickly followed up by Star Frontiers bought by my mom at a garage sale. Then it was picking up the latest orange spine book from Toys R Us or Ace Hardware.

I had always loved Thundarr the Barbarian and over the years I abused the family VCR with every awesomely terrible apocalypse movie and giant monster movie I could rent. Saturday morning and after school cartoons of power swords, cyber wizards, and transforming robots were my jam as well. It all got added to the stew in my mind that was my perfect apocalypse setting. When I received my first Wargames West newsprint catalogue I planned out my first hobby shop RPG purchase, the 3rd edition Gamma World box set. One taste of that sweet, sweet apocalypse and I had to have more. As a teen, I wrote the RPGA Gamma World module “Ben Dellyn or Bust,” edited by none other than Jean Rabbe, and ran it at a con by my dad’s place. It was a bit more organized chaos than the made up games of my youth but still had the gonzo premise I loved. After that, it was excursions at my High School game club where electric, size changing eagles and cobalt blue monkey scavengers fought pseudo-smurfs in power armor. Ah, those were the good old days when I had all the time in the world… 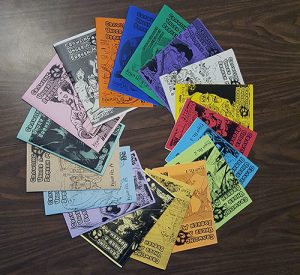 Fast forward to several years ago. A good friend introduced me to the Dungeon Crawl Classics RPG and I was hooked. It really captured what I was looking for in a fantasy RPG. My friend also introduced me to the various DCC fanzines (Crawl!, Crawljammer, & Metal Gods) and a strange, wonderful idea brewed in my brain. I’d always loved post apocalyptic RPG settings and by that time I’d even helped pen a few (The End from Scapegoat Games and Atomic Highway by Radioactive Ape Designs). I saw that DCC was the perfect system to write my own post apocalyptic setting and the fanzine format was the perfect platform to unleash it upon the world. Thus the Crawling Under a Broken Moon fanzine was born. Well, actually, it took a few months to write it, get a 3rd party publisher license from Goodman Games, ink up some particularly awful art, find some Creative Commons art to fill in the gaps, and assemble the layout files. Luckily, I had formed Shield of Faith Studios back in 2002 when I got a bit of a heartbreaker out of my system by publishing Tales of Wyn D’mere. Don’t be tempted to look it up. It’s for your own good. Nothing to see here. Please move along. Anyways, I already had a publisher’s account on RPGnow set up so I could sell PDF versions as well as print versions from my blogsite.

Within the pages of the fanzine the world of Umerica grew into being and eventually became an entity of its own. Each issue added definition and depth to the setting. The fact that I had many amazing artists and guest authors offer to work on the zine helped tremendously as well. After a few years I knew that Umerica had outgrown its origins and needed a more traditional treatment to make it accessible to a larger number of players and GMs. This led to months of research that culminated in launching a very successful Kickstarter in early 2017 for a setting book full of revised and new information about campaigning in Umerica. The result was the publishing of the Umerican Survival Guide and several other books in the Umerica line. This could have never happened without the amazing fanbase that Crawling Under a Broken Moon attracted and the fanzine would have never been made without the amazing DCC community that supported me. 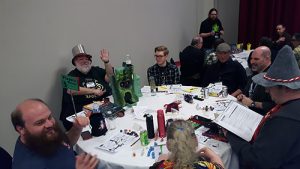 Speaking of support, a big thank you goes out to everyone who has ever joined one of my tables of Umerican insanity at a convention or FLGS. Castle Gameskull and I have been running Umerican events at conventions for many years now and every table I’ve run has been a blast. The energy and feedback you have given has definitely helped make Umerica great.

So, what is in store for Umerica in the future? Hopefully a few more Kickstarters and many more books of post apocalyptic goodness. If you frequent Garycon, Gencon, or Gamehole Con check the event schedule for any Umerican events run by me or my green shirted Scions of the Apocalypse crew. Keep an eye peeled for a bearded man in a metal top hat using a toy castle as a game screen if you are looking to find me. 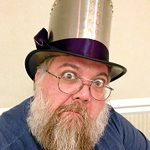 May all of your mutations be awesome,

Check out the full selection of Shield of Faith Studios releases in our online store!