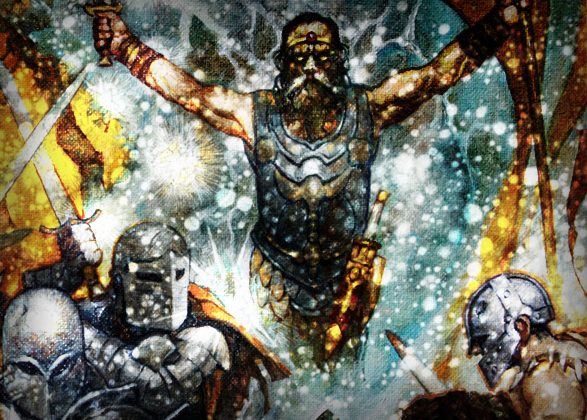 Strange things are afoot in the village of Eng….

The Queen of Elfland’s Son is the latest adventure for the Dungeon Crawl Classics role-playing game. Meant for level one characters, it offers up a chance to venture into magical realms and face dangers by magic, sword, and politics—and that last one is nasty. 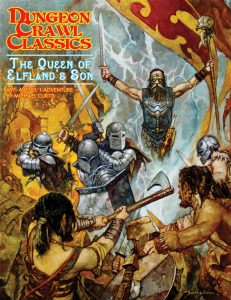 Slaughter and shadows keep the villagers of Eng inside after dark. Mighty adventurers are needed to seek out the source of these threats and stop them for good. This quest will take the heroes and pit them against the cruelty of the Unseelie Court of Faerie. Can you overcome the machinations of the Queen of Elfland or will you fall victim to the glamours and wiles of Elfland’s malicious nobility?

Inspired by The King of Elfland’s Daughter by Lord Dunsany, Michael Curtis takes your characters on an adventure into another realm, where magic and might are the same and the intrigue of the court carries heavy influence. It also has a jaw-dropping cover by Sanjulian.

DCC #97: The Queen of Elfland’s Son is the new adventure module for Dungeon Crawl Classics meant for level one characters. It is scheduled for release on June 25th.