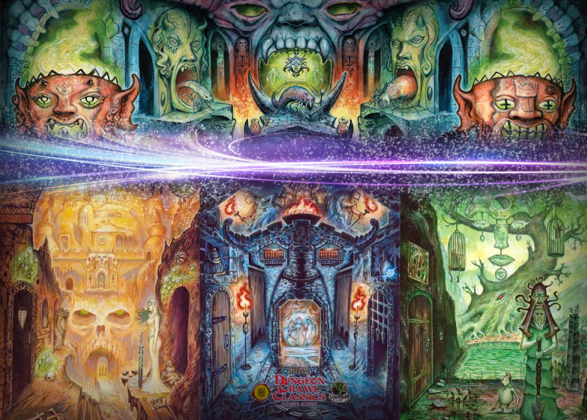 The Dungeon Crawl Classics Judge’s Screen is moving to third. No, this isn’t a baseball reference, it’s the fact that it is time to take the DCC Judge’s Screen to its third printing.

And what a new printing it is!

The storied short history of the DCC Judge’s Screen begins back in 2015 when it was the item released from Goodman Games in conjunction with Free RPG Day. A short time afterwards, it was released to the mass market and has been a consistent seller since. And now, we’ve got a third printing heading your way—and we’ve made a few changes.

The most obvious change is that we’ve got some dynamic new art from Doug Kovacs gracing it. This is the same artwork that serves as the backdrop for the Gen Con booth, and it looks spectacular on the screen. In addition, we’ve added some player-facing tables that are useful for the folks on that side of the screen, as well! Check out the new artwork below!

And if you are a member of the Road Crew, you can get the complimentary screen to go along with the regular one! After running only TWO Road Crew events you can get your FREE DCC Road Crew Screen. Check out all the details in this post!

You can look for the new printing of the DCC Judge’s Screen to arrive in June. We are totally out of previous printing on the screen, so any order placed at this point is actually a pre-order for the new version of the screen! So get in line now! June will be here—and so will this cool new screen—before you know it!