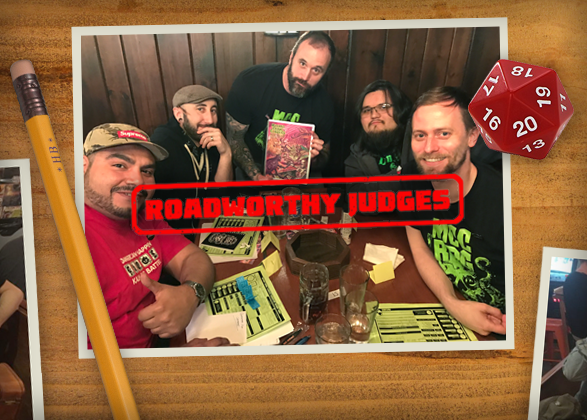 Welcome to Roadworthy! Today we give another Road Crew Judge a moment to share their experience and wisdom. We hope that these profiles help provide insight into their personality and style, and maybe give up-and-coming Judges some advice on improving their game.

The Road Crew theme for 2018 is Strange New Worlds! Head out and find unique places to run games for willing participants. Get creative! Run some games at a birthday party! Or during a road trip! Or…wherever the urge takes you! Who knows, maybe we’ll take notice and put you up on our website. Jump on into the Road Crew program for your chance!

This time out we cross the big pond to show off Judge Tim Deschene!

Hi, I’m Tim Deschene. I live in North Smithfield, RI, and I would describe myself as strong, handsome, entertaining, and most of all, humble. 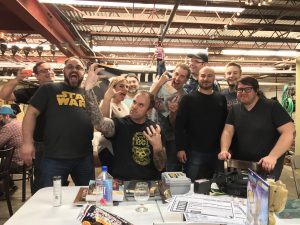 Around 2012/2013, I was looking for a new game to run that would make me fall in love with RPGs again. The trend of games at that time to interact more with the rules of the game via character optimization rather than creating a shared story was killing all the fun for me. I saw people talking about DCC online, so I picked up a copy of the rules.

I fell in love, but didn’t get to play in a game until Gen Con 2015. It was there that the community really captured my heart even more than the game had.

I believe I ran around 20 games in 2017. I had stopped tracking them once I hit all the swag goals, but I know I did several more after reaching the last swag level. So far I’ve only scheduled two games for 2018, but that will be picking up shortly. 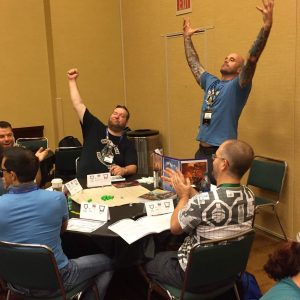 There are so many! I loved introducing a 10-year-old to his first RPG experience. He played a warrior and hit a deed to turn the bad guy’s face into a ruin of flesh with a dinner plate in The Jeweler That Dealt in Stardust. I also met a good friend, Joe Macrino, in that game. I was fortunate enough to be asked to run the first ever DCC Team Tournament at Gen Con 2017, and that was incredible, probably the most fun I’ve ever had running a game. I’ve also combined some of my road crew games with Lawful Good Gaming events and helped out some great charities in the process.

I’ve run games at Toy Vault in Warwick, RI; Untapped Games in Pawtucket, RI; during Drinking and Dragons in New London, CT; at Total Con, Gary Con, and Gen Con; and, finally, I’ll be kicking off a bi-weekly DCC/MCC game at the tasting room at Revival Brewing Co in Cranston, RI on Sundays. 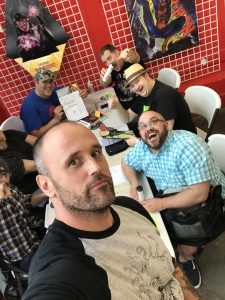 Re-read the rules once in a while, but don’t obsess over them. Have fun. Be a fan of the characters. Encourage players to stop focusing on what’s on their character sheets and to interact with the narrative. Listen to Spellburn. Devour books, movies, and music and let those things influence your games.