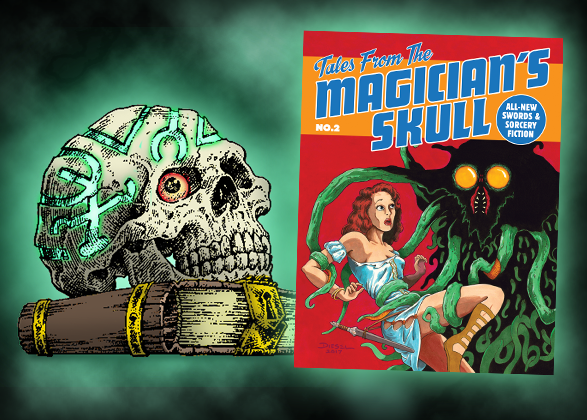 GREETINGS MORTALS! It is I, The Skull!

Pay heed to my words, lest you discover that my boney exterior is not as pleasant as my internal fire! Now, listen to my minion as he lays forth my plans….

Thanks, my skeletal overlord!

We are a big fan of classic sword and sorcery pulp fiction. When we launched the Kickstarter to get Tales From the Magician’s Skull started, you funded two issues worth of material. Now that issue #1 is printed and starting to ship to backers, it’s time to announce the details on issue #2.

The second issue of Tales From the Magician’s Skull will continue the great material that we put in place with the first issue. The second issue contains 7 new stories by some amazing talent, and will release in June—but you can pre-order it today!

Here is the complete table of contents for issue #2:

Blood of the Forest Born
by Nathan Long

Then she saw it. The eight-legged circle of Atseska. Any Haata child with a grandfather who told ghost stories knew about the black magic of Atseska the Spider.

Break them on the Dying Stones
by Setsu Uzume

The blindfold itched, and stank of wet sheep. Gatja raised her hands and leaned forward to scratch her face, but the muting chains rang taut — locking her wrists and neck just beyond reach.

They followed the crooked man, bearing a corpse on his back and a light in his hand, into the wizard’s garden.

Benhus drew and met him in a clash of strident steel.  They traded blows, at first with more maddened intent than skill, swords meeting and sliding apart with a sound like a blacksmith’s anvil seeing frantic work.

Day of the Shark
by James Stoddard

“I led my hunters here, daring the depths to seek you.  I have a keen eye, steady arms, and the courage of ten. I have killed the Great White single-handed. I demand the Trial.”

“Hush,” Dhulyn’s tone was such that even the mage fell silent. “Something large breathes ten or twelve paces away from us.”

Only the commander’s head emerged from the woody cage, neck stretched back and mouth open. From it protruded his tongue, darker than blood and—incredibly—as long as his forearm.

The People of the Pit
Illustrated by Stefan Poag

In each issue, we present an appendix of game statistics for the various creatures, spells, and items described in each issue. All of these stats are for the Dungeon Crawl Classics Role Playing Game system.

The second issue of Tales From the Magicians Skull will be headed your way on June 15th, but you can pre-order it now! And don’t forget the first issue, either! It’s not too late to get in on the ground floor of our new fiction series!

In fact, The Skull was telling me the other day that if someone were to obtain a full listing of all of his stories, then that person could—

ENOUGH! I have given too much of my attention to this! Now I shall return to my lair and consider what I shall reveal to you next! More of the next chapter of my observations will be unveiled soon.