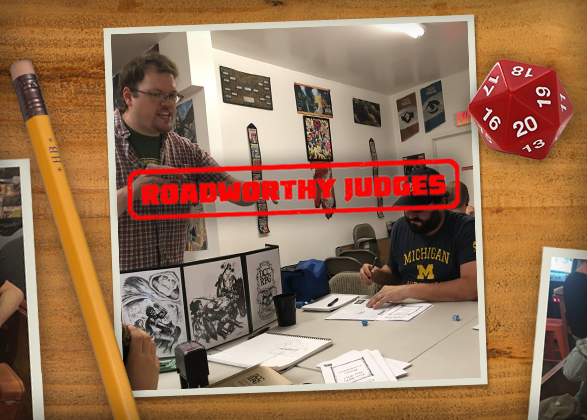 Welcome to Roadworthy! Today we give another Road Crew Judge a moment to share their experience and wisdom. We hope that these profiles help provide insight into their personality and style, and maybe give up-and-coming Judges some advice on improving their game.

The Road Crew theme for 2018 is Strange New Worlds! Head out and find unique places to run games for willing participants. Get creative! Run some games at a zoo! Or during a camping trip! Or…wherever the urge takes you! Who knows, maybe we’ll take notice and put you up on our website. Jump on into the Road Crew program for your chance!

This time out we cross the big pond to show off Judge Dan of Michigan!

I’m Dan Domme, and I live in central Michigan, about halfway between the University of Michigan and Michigan State. I don’t game a lot locally, but I occasionally either drive up to Lansing or go to my local convention in Ann Arbor. There’s one local comic book shop that could host a game, but with a little one around, scheduling a regular game is tough.

In late 2015, I was trying out an old-school retro-clone at my first convention after moving to Michigan, and although it was OK, I thought the table next to me was having far more fun than we were. Afterwards, I learned that the table was Judge Jim Wampler running a DCC Purple Planet game. One of the players at the table later sold me on the game in the dealer room, so I bought one of the last copies.

And then I ran into this bizarre wizard named Doug Kovacs who signed it for me. Not long after, I was hooked.

In 2017, it was around ten or so. I lost count in my head, instead deciding to keep track via which particular Road Crew swag I ended up getting sent to me. I fell a few games short of the belt buckle, but I guess that’s what happens when nearly all of your gaming happens at conventions. 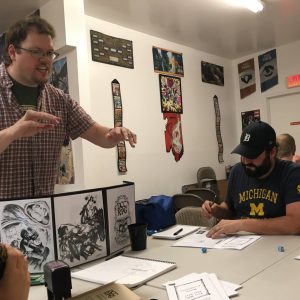 Now that I think about it, there are just so many to choose from. I always enjoy running DCC for gamers who have otherwise only experienced the latest D&D editions, or Pathfinder. Usually, they come up to me after the game and we start waxing poetic about the system and the adventures. I just love knowing I was able to serve up a good time if that was the case.

Now, if you’re asking for specifics, then it’s probably when I ran Caverns of Thracia at Gen Con 50 this past year… when the PCs ran into an ogre dressed as “Macho Man” Randy Savage. I’d say “you had to be there,” but I think the awesomeness speaks for itself. I may or may not have stayed true to the original source material.

I usually only run games at conventions, since my schedule is so hectic and I can’t commit to any sort of regular game. This year may be a bit difficult since I won’t be headed to GaryCon. But I’m planning on running an Age of Cthulhu adventure at Gen Con, and who knows what Free RPG Day will bring, and I’m sure to be seen at U-Con in Ypsilanti in the Autumn.

I’m also active online, so find me on Google+, where I can game on weeknights. I’m usually up for a game at a real table, too, so let me know if you’re in the mid-Michigan area, particularly if you’ve got the cat-herding skills that I don’t.

If you’re a novice judge, don’t be intimidated. Some of your games will be weaker than others, but as long as everyone’s having fun, it won’t matter. Go with the flow of the table and don’t be afraid to wander from the printed material. Don’t worry about the rules and be confident when you have to make a judgement on the fly.

If you’re a seasoned pro, then get yourself hyped and snap into a Slim Jim!