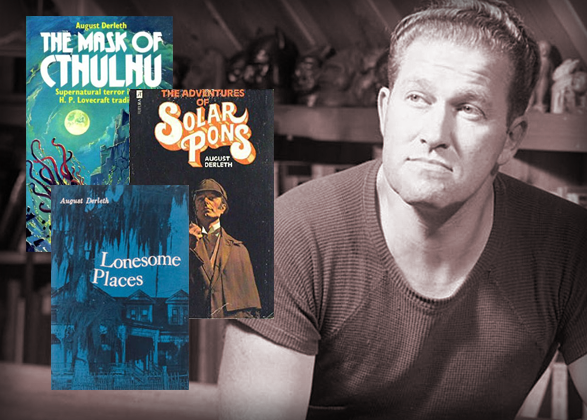 Adventures in Fiction: Arkham House, Ithaqua, and In-Jokes: The Influence of August Derleth

Our Adventures in Fiction series is meant to take a look at the writers and creators behind the genre(s) that helped to forge not only our favorite hobby, but our lives. Most of you probably know the name H.P. Lovecraft, but do you know August Derleth? Bradley K. McDevitt reminds you that you have a good reason to remember him.

Without August Derleth (1909-1971), you probably wouldn’t have that Cthulhu bumper sticker on your car, that Cthulhu for President poster, and certainly not that Plushie Cthulhu you have staring down at you from your geek-memorabilia shelf.  Not that Cthulhu would not exist, but he (it?) would be just one more forgotten character in a series of stories by an author unknown except to the most ardent of horror literati. Howard Philip Lovecraft’s greatest creation and most if not all of his fiction would have passed into obscurity if not for August Derleth’s founding of Arkham House publishing. 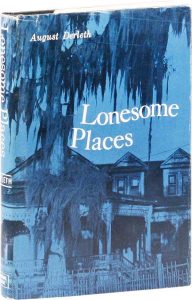 Derleth was a prolific author in his own right, expanding the scope of the Cthulhu mythos (a term Derleth himself coined), as well as hundreds of pieces of fiction that rank among the greatest pieces of horror fiction ever penned. Anyone who can read The Lonesome Places and then take a walk after dark without looking over their shoulder every few moments has better nerves than this author possesses. The scope of Derleth’s literary output beyond his horror, of which his Sherlock Holmes pastiche “Solar Pons” was the least, is mostly beyond the scope of this retrospective. In truth, even a slight perusal of his credits is astonishing, and it is a surprise to think he is not taught in more mainstream American literature classes.  But his contributions to weird fiction in general and the Cthulhu Mythos specifically are the best remembered. 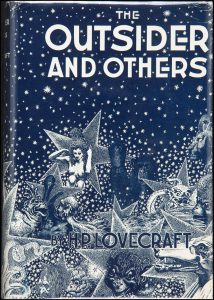 When Derleth’s old friend “Grampa” Lovecraft passed away, his legacy was in danger of fading much like that of his contemporary Seabury Quinn. Derleth resolved to act to prevent this from happening, and founded, with Donald Wandrei’s help, Arkham House. Their first book, a paperback edition of The Outsider and Others, became a popular read among, amusingly, the infantry during World War II, because the small size of the book allowed it to be carried in their pants pockets. Given Lovecraft’s well-known lack of belief in a Higher Power, comments about atheist in fox holes seem almost redundant. Despite several near-bankruptcies, Arkham House continued to produce and keep in the public eye such important Weird Tales and Appendix N authors as Robert E. Howard, as well as others like Robert Bloch, the afore-mentioned Seabury Quinn, and Ray Bradbury. With Derleth’s tireless efforts up to his passing in 1971, many great authors besides Lovecraft were saved and many more given a good start. 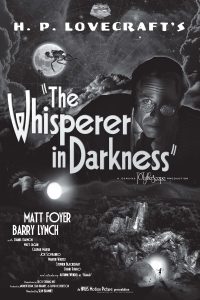 Besides saving Lovecraft from obscurity, Derleth introduced many of the Elder Beings that are now a standard part of the Mythos. Derleth borrowed Ithuaqua from Algernon Blackwood for The Whisperer in Darkness, ensuring his place in the pantheon. Further, Derleth finished many of the dozens of stories Lovecraft left unfinished before cancer claimed his life in 1937. Many Lovecraft purists deride Derleth’s efforts in this direction, pointing out that such “posthumous collaborations,” often from very short jottings in Lovecraft’s notebooks,  were almost exclusively Derleth’s work, and accused him of tacking on Lovecraft’s name as a co-author for publicity’s sake.

Also controversially, as many readers may already know, Derleth abandoned Lovecraft’s original vision of the beings of the Mythos being amoral, or beyond any morality that the human mind could fathom. He linked various Elder Gods to the clichéd Classical elements and lined them up in opposition to each other like cosmic-level good guys and bad guys. This constituted a dilution of Lovecraft’s original portrayal of an amoral universe that plagues the Mythos to this day. 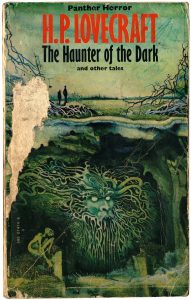 Lastly, Derleth contributed, directly and indirectly, to the Cthulhu Mythos, Appendix N, and the culture of gaming in another way.  It is a simple fact that gamers like their puns, in-jokes and more overt jokes in general. The phenomena of in-jokes can be paid fully at Lovecraft’s feet, with his references, for just one example, to Robert Blake (aka protégé and future Psycho author Robert Bloch) in The Haunter of the Dark. Other in-jokes among many alluded to “the mad priest Luveh-Keraph” and the infamous grimoire Les Cultes Des Ghules, authored by a French nobleman, last name of… D’Erlette.

Bits like this arguably be said to have paved the road to acceptance for the in-jokes that crop up in many games (Nystul’s Magic Aura, after Gygax family friend and early play-tester Bradley Nystul), the various spells named Len Leomund, etc. in Dungeons and Dragons), and even shows up in the DCC RPG (the Troll Lords) on page 430 being the most obvious. So next time your gaming group is sitting around playing and indulging in all sorts of jokes and in-jokes that no one outside your own little circle would ever get, know that you are following in traditions started by such Appendix N authors as Lovecraft, Howard, and, of course, the good Le Comte D’Erlette himself.

Cthulhu would be proud of you…even Plushie Cthulhu. 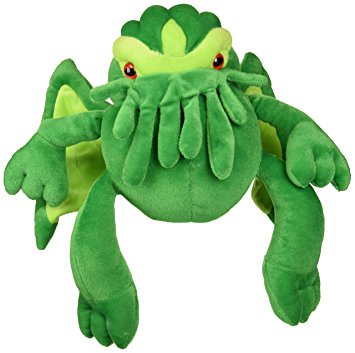