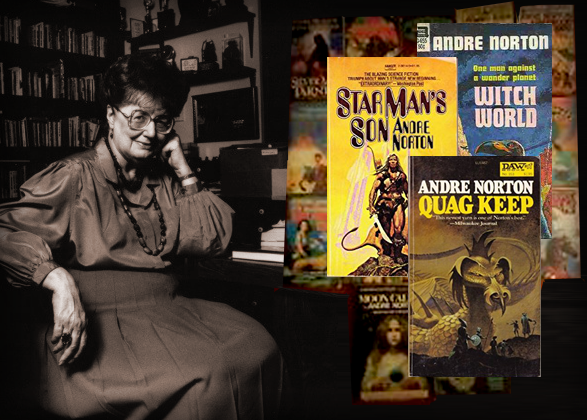 Famed fantasy and science fiction author Andre Norton was born 106 years ago today, on February 17, 1912. Join us, as we celebrate her birthday by taking a look at her works and their influences on both adventure gaming and genre fiction.

Born as Alice Mary Norton in 1912, Norton started writing while she was still in high school in Cleveland, Ohio. In fact, she completed her first novel while still attending high school, though it was not published until later in 1938. Wishing to pursue writing as a career, in 1934 she had her name legally changed to Andre Alice Norton, and adopted several male-sounding pen names so as to prevent her gender from becoming an obstacle to sales in the first market she wrote for: young boys literature.

Until becoming a full-time writer in 1958, Norton plied many book-related trades to support herself, from working as a special librarian at the Library of Congress, owning and operating a book store, to working as a reader for small press science fiction publishers in New York City. 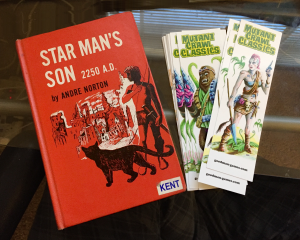 A 1952 1st edition of Starman’s Son, along with a couple of his great-grandchildren.

Norton quickly became an established genre writer in the 1940s. After many published short stories and novellas, her first science fiction novel, Starman’s Son 2250 A.D., was published in 1952. Coming a mere seven years after the nuclear ending of World War II, the novel was innovative and set down many of the post-apocalyptic storytelling tropes to which future authors in that sub-genre would hew. And of course the influences of this novel were not merely limited to other science fiction books. Besides being cited by Gary Gygax in his Appendix: N listing in the Advanced Dungeons & Dragons Dungeon Master’s Guide, Starman’s Son 2250 A.D. also served as an inspirational source to everything from James M. Ward’s Gamma World RPG to Jack Kirby’s 1970s comic book Kamandi, The Last Boy on Earth. Even today, creatures and settings inspired by this book appear in the Mutant Crawl Classics RPG.

Norton’s influence on adventure gaming and its creators was not accidental. She often employed a recurring motif in her books in which the protagonist begins as an outsider or “other”, and through dedicating themselves to a perilous journey in the wilderness, eventually becomes a fully-realized heroic figure. The parallels to the level advancement and experience point systems of early role playing games is obvious. 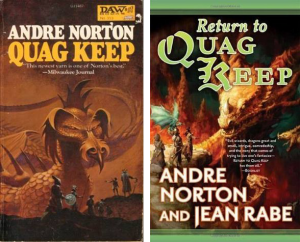 Andre Norton has the honor of writing both the first and last novels set in Gary Gygax’s Greyhawk campaign world.

In 1976, Gary Gygax even persuaded Andre Norton to try out his new Dungeons & Dragons game, and he ran her through a session in his storied world of Greyhawk. Shortly thereafter, Norton was inspired to write the very first D&D novel, Quag Keep (1979). Along with Fritz Leiber, Andre Norton was one of a handful of early authors to experience the very games that their works had inspired.

Andre Norton’s legacy cannot be overstated. Her works earned her many accolades (see her bibliography here). Her Witch World series was nominated for two Hugo Awards. She was the first woman to receive the Gandalf Grand Master Award (1977), the Damon Knight Grand Master Award (1984), and she was the first woman to be inducted into the Science Fiction and Fantasy Hall of Fame. Active up until the time of her death in 2005, Norton even teamed up with author and game designer Jean Rabe to co-write the sequel book Return to Quag Keep, published posthumously in 2006. 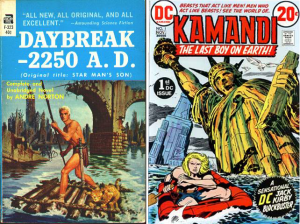 Separated at birth: Fors of the Puma Clan and Kamandi, The Last Boy on Earth.

Bonus Content: Though there is no documentation to prove this, it seems fairly obvious that comics legend Jack Kirby was well acquainted with the paperback novel version of Starman’s Son 2250 A.D., renamed by the publisher as Daybreak – 2250 A.D. Sometimes cover visuals speak louder than words.