Goodman Games is proud to showcase our amazing Third Party Publishers, and we want to give each of them a moment to shine. That’s the reason for our Community Publisher Profiles. This time up, we’ve got Jonathan Snodgrass of Tuesday Night Fiend Club talking about Vehicle Mayhem! 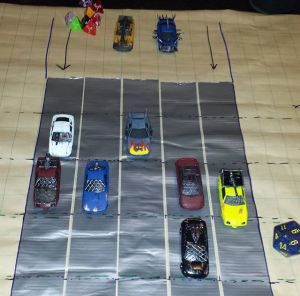 Vehicle Mayhem is 28 black & white pages in zine format for $5. Inside, you will find rules for car combat, vehicle modification, and car mounted weapons. This rules supplement is aimed towards judges and players looking to take their game to the road, whether for one-shot games or as part of a larger campaign. While this system is fairly stand-alone and can be easily adapted to most any RPG system, Vehicle Mayhem is specifically designed for use with the Dungeon Crawl Classics and Mutant Crawl Classics RPGs. 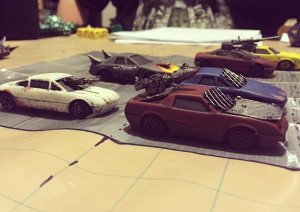 With a little modification, cheap die-cast cars are ready for the apocalypse!

I wrote the original version of Vehicle Mayhem a few years ago as part of my home DCC game. My group is extremely open to weird and new adventures, so I had built the campaign around medieval peasants thrust into strange, deadly worlds. One of these was a post-apocalyptic wasteland, reached through a blind leap into a magical portal. Being a huge Mad Max fan, I knew I had to have a killer car race. That first test session went over extremely well. My players had a blast and encouraged me to publish the rules.

Throughout the design process, I had two big goals: the rules had to be simple and they had to feel like DCC. I kept car stats basic and intuitive; it’s easy to guess what stat is used for anything you want to do on the road. The sequence of play is straightforward and options are clear. By tracking relative car positions and movement on a small play mat or board, players stay engaged in the action. Effects of collisions and damage are managed through deadly random tables, as are events each round. 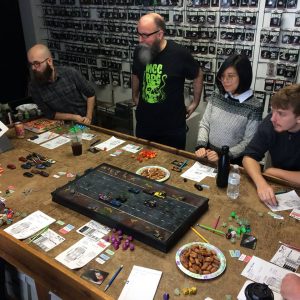 Vehicle Mayhem in action at a local game store

After playing several sessions with friends, I tested out the rules at my local games store. The table was mixed, with some veterans of my home group, experienced DCC players who’d never tried these rules, and a couple who had never played a tabletop RPG. I was happy to see that even the new players picked up the rules quickly and easily (and remained competitive throughout the race). One of these new players, his car on the verge of destruction, managed to leap to another car (which happened to be driven by his girlfriend). As he settled into the passenger seat, he was surprised when she spent her action shoving him right back out to his death. By the end of that session, I knew I’d achieved those original goals. 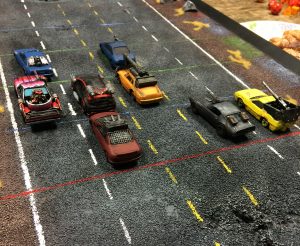 A fancy board made from insulation foam

I’ll be bringing Vehicle Mayhem to GaryCon this year, running a “Disciples of the Wheel” tournament. I feel like I’m coming full circle, as one of Jim Wampler’s MCC play tests at GaryCon VI helped inspire the DCC campaign that eventually spawned Vehicle Mayhem.

You can pick up Vehicle Mayhem now in our online store!