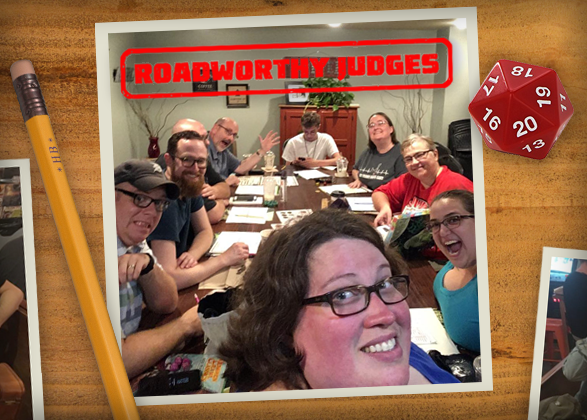 Welcome to Roadworthy. Once more, we’re showing off one of our star Road Crew Judges. Each interview is meant to provide insight into their personality and style, and maybe give up-and-coming Judges some advice on improving their game.

The Road Crew theme for 2018 is Strange New Worlds! We want you to go to new, unique places to run games for willing participants. Get out there! Run some games at your library! Or a local pub! Or…wherever the urge takes you! Who knows, maybe we’ll take notice and put you up on our website. Jump on into the Road Crew program for your chance!

This time out we spotlight Judge Joan Troyer!

Roadworthy: A Profile Of Joan Troyer

Judge Joan (of Arc) or Judge Indiana Joan(s) but the first stuck best. And it’s meant for proper pronunciation of my first name. I game and judge in Goshen and Elkhart, IN. I enjoy the challenges of figuring things out—plot twists, puzzles, conquering difficulties, and dice rolling.

I discovered DCC at Better World Books in Goshen, IN. Another gamer brought his book to Thursday Game Night and asked if there would be players who would like to try it out. I will admit it. I admitted at GenCon 50 to multiple Goodman Games staff, Spellburn’s hosts, Glowburn’s hosts, and other judges in the Goodman Games playing room that the first time I played DCC—I hated it. Ok, really…who wants to go in with 4 PCs and come out with NONE? And never see the end of the adventure. None of us around the table enjoyed the game at all. It was months before I agreed to play again with the same judge. If ever we meet in person, I’d be glad to give you the rest of the story.

But here I am a Judge for DCC and having a blast! My tables are filling up. I’ve got a devoted fan club to DCC and I’m being pushed by the players to grow my knowledge of DCC. Funnels are definitely easier to run, but the fan base is eager to level up and get going on a campaign.

So far I’ve run just one Road Crew game in 2018, but the year, well at least the next three month are filled up to Gary Con with Road Crew events. Running once a week and every other Saturday. These are divided at two FLGS in North Central Indiana.

In 2017, I ran over 14 Road Crew games including 3 at GenCon 50. Now that was a blast. I’d never been to GenCon or any game con. So this was a huge and exciting time for me. Can you say “High and exhilarating?” Tough to come back to reality after that one. Thanks To Goodman Games and the Road Crew Contest! 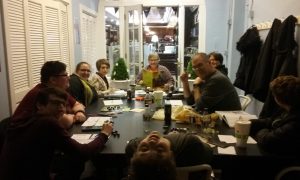 Oh wow, you are asking me to pick a favorite. I’m going to say the ones that leave my ribs hurting for days with the laughter my players give me. There are 0-level PCs that have been created and have made it to Level 1 and continue to survive. For one, Peach, the Cobbler is now a warrior who presently is just a vapor as we hunt down Bargle for the 1983 Red Box adventure. Peach’s Mighty Deed success just prior to that with jumping over a table in which hiding behind it were two kobolds and skewering them on her spear. Now she has a shish kebab of kobold. Hopefully someone had picked it up for when she re-vaporizes. Or the talking goat head in a crystal ball that a PC is carrying around in their backpack or the stick that was picked up that says over and over “Help me!” in a whispering tone. And says it at the most inconvenient times!

You may check out where to find DCC events on the Facebook pages of Better World Board Gamers in their Events and also at Secret Door Games in Elkhart, IN at Secret Door RPG Club in the Events section.

Better World Books runs every Thursday and Secret Door Games is an every other Saturday event.

Whatever you decide to play whether a module or home brew, listen to what your players are saying and what they want to do. I’m a newbie Judge/GM/DM. Having never run an RPG before, I expected the module to run itself and I found that it was work to get the details to run as written. My players helped me learn that a module is a guide and the ways they came to things in the module have been and are spectacular. Yes, we run into sluggish times, but then there is that one player who suddenly gets an epiphany and we all end up laughing at what happens next. That’s the DCC way! Have fun!