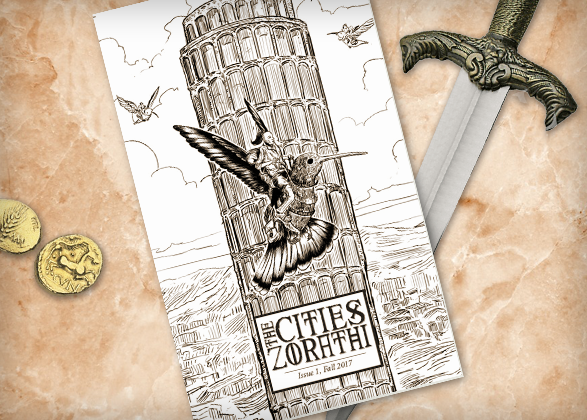 The newest zine in the great tradition of Dungeon Crawl Classics zines makes it’s debut in our online store. The Cities Zorathi is a new zine that explores a city-state filled with all manner of material perfect for a fantasy campaign. Politics, intrigue, crime, rebellion, action, adventure, and much more await in the first issue, which focuses on Crone Zorathus, the oldest city in the city state. Issue 1 also includes an overview of the factions at work in The Zorathan City State, as well as details on a few in particular, a new patron—The Ram of Light—the Zorathan coinage, a discussion of the postal service, and several dozen NPCs each with information about the cities and The Great Maze lying beneath the sprawling setting.

And don’t forget some of the other amazing zines that are out there! The latest issue of Crawl! focuses on the functions and uses of Luck. The second issue of D.A.M.N. Magazine features a level-10 (?!) funnel. The 18th issue of Crawling Under a Broken Moon takes you to The Menfish Pyramid of the Bass Masters. And the second issue of Meanderings presents a feature on the upcoming Mutant Crawl Classics RPG. And that’s just a sample of many of the great zines available! Be sure to check all of them out!