Adventures in Film Fiction: Hammer Films and the Cleric Class 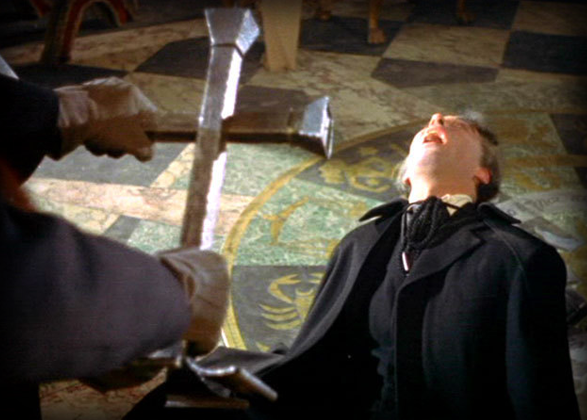 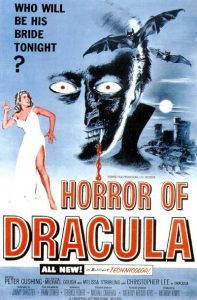 The year 2018 marks the 60th anniversary of the Hammer Horror film Dracula. Why is this so important? You can thank Dracula for the creation of the cleric class, and the Hammer Horror series in general for influencing several aspects of Dungeons and Dragons (and later the Dungeon Crawl Classics role-playing game).

The history of Hammer films is as mysterious and convoluted as the history of gaming itself. Founded in 1935 as Hammer Productions, the original incarnation went bankrupt and was later revived in 1938, going on to become Hammer Film Productions in 1948 with the release of The Dark Road. So, depending on your reckoning, Hammer Films has just celebrated either 70 or 80 years. The other big anniversary, and one with a decidedly important impact on our hobby, is the 60th anniversary of Hammer’s Dracula (also known as Horror of Dracula), starring Sir Christopher Lee and Peter Cushing. This is where the cleric comes in.

While some of the exact details are contested, Hammer’s Dracula film played a major role in the shaping of the cleric class. Everyone agrees that Dave Fant, a player in Dave Arneson’s Blackmoor campaign, portrayed the first vampire in a D&D game. His character, Sir Fang, was so powerful and unbalancing that the idea of a vampire hunter was hatched. The basis of this vampire hunter was Peter Cushing’s character from Dracula. The powers of this character class were expanded to fill several useful niches and the vampire hunter morphed into the priest, and finally the cleric. While there is some debate over whether the first cleric was played by Mike Carr or by William Crolley, it was at this point where magic using split into two differing classes, forever altering the landscape of gaming. 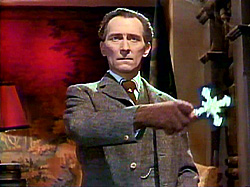 When directly asked about the influences for character classes and clerics, Gary Gygax is cited as mentioning Brother Odo (Odo of Bayeux), Friar Tuck, and Hammer Films, with a smattering of faith healing charlatans thrown in for theatrical measure. In this matter, the thread of Hammer Films seems to be a commonality of inspiration between both Arneson and Gygax.

While Peter Cushing’s portrayal of Van Helsing certainly does not resemble a cleric on the surface, when one looks a bit deeper, there are several points of similarity. The greatest of these is his ability to turn undead (a point specifically cited by Gygax). In the original Dungeons and Dragons, this power was even accomplished by use of a cross and not a “holy symbol.” If one blends Cushing’s Van Helsing with the sublime performance of Andrew Keir as Father Sandor in Dracula: Prince of Darkness or the imagery of Friar Tuck, one has something that truly begins to resemble the early archetypal cleric.

Moving forward, Hammer Horror would continue to cast a long shadow over how vampires were seen, both on-screen and within our hobby. Prior to Lee’s portrayal, the primary appearance of a vampire in cinema was well-dressed, suave, and distinguished. Christopher Lee brought a bestial quality to the character. Unlike the almost rodent-like appearance of actor Max Shreck in Nosferatu, Hammer’s Dracula took the grace and nobility of Bela Lugosi’s characterization and added a sense of feral rage to its core. Hammer’s Count Dracula was capable of charm and complex machinations as well as being brutally forthright in its actions. Sometimes this was an intentional choice, but at least once it was because Hammer simply couldn’t afford to pay Lee for a speaking role (and so Dracula only hissed menacingly). 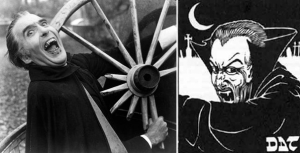 While the vampire entered gaming via the Blackmoor campaign, it wasn’t until the AD&D Monster Manual that David Trampier would give the monster a face. Trampier’s illustration is eerily reminiscent of Lee’s visage in the beginning of Dracula A.D. 1972 at the moment Dracula is impaled upon a wagon wheel. Compared side by side, the similarities are quite striking and it seems unlikely that it is merely coincidental. This image shaped the vampire as we know him in gaming. Of course, Lee’s Dracula was not the only Hammer horror icon to appear to have influenced Trampier.

1964’s The Evil of Frankenstein gave us Kiwi Kingston in the role of the creature. Hammer Films took advantage of Universal Pictures distributing the movie to build upon the look of a classic Universal monster. In keeping with Hammer’s general style, the look of Boris Karloff’s square-headed creature was transformed. Kingston’s portrayal looked much less human and more horrific, marked by massive stitches and with eyes that were mostly pools of blackness. As with the AD&D vampire, Trampier’s depiction of the rampaging flesh golem bears a sincere resemblance to the Hammer Film.

Early Hammer films continued growing in popularity through the 1970s, popping up on televisions across the US as part of an ever growing wave of inexpensive-to-produce creature features. With this revival came an opportunity for Gygax, Arneson, and others to watch those Hammer Films over and over again…and watch them they did. 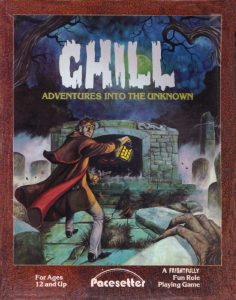 Gary Gygax was also a great fan of Hammer films and Peter Cushing specifically. Gygax had seen many of the Hammer films during their release in theaters and, in the early days of D&D, he spent many Friday nights re-watching them on Creature Features on WGN. The movies ran so late that his son Ernie would often be sent to bed without seeing how they ended—but the screams from the television could be heard through his bedroom walls.

During this renaissance of the older Hammer releases, another company embraced the studio’s aesthetic. The entire look and feel of the 1984 release from Pacesetter, Chill, is unabashedly drawn from Hammer Films. Pacesetter, like TSR before them, specifically cited only literary resources for inspiration. Even so, it is clearly a mustachioed Christopher Lee as the vampire in the 1st edition. There is no mistaking the face, nor is there any way to confuse the cover’s imagery for anything other than the gothic horror of Hammer. 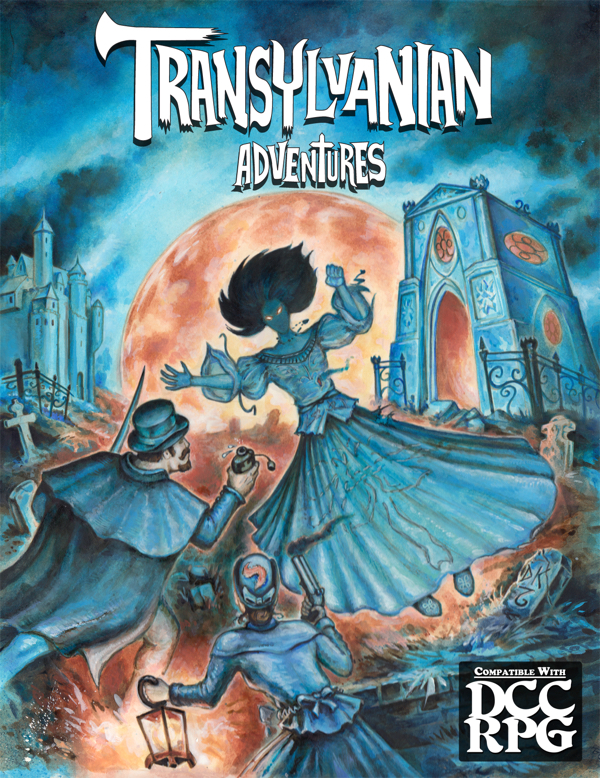 Many Old School Revolution (OSR) products draw upon the foundations of Hammer films to great effect. The Fenworthy Inheritance, from Montidots and written by artist Simon Todd (familiar to many from his work in Carnival of the Damned), uses the GORE system and, while Lovecraftian in nature, has been reviewed as owing more to Hammer films than Lovecraft—and in a very good way. Simon Todd’s artist sensibilities weave imagery both familiar and strange into a disturbing web reminiscent of some of Hammer’s best.

Finally, there is no doubt that the DCC RPG third party supplement Transylvanian Adventures is inspired by Hammer Horror. It pretty much says so right on the cover. The third-party supplement for DCC RPG captures the gothic horror vibe directly from the films of Lee and Cushing. Transylvanian Adventures strives to not be influenced by Hammer films so much as to emulate them into playable form. 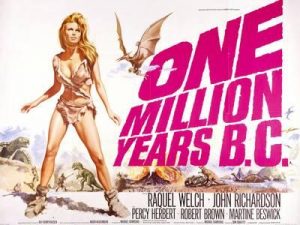 Even now, there is much that can be gained by going back through the Hammer catalog of films. Perhaps a judge might pull from the “cave girl” movies, such as One Million Years B.C. or Creatures the World Forgot, as inspiration for further adventures beyond Michael Curtis’ Frozen in Time. One could easily shift the setting of The Devil Rides Out backwards in time a few decades to be useful for the forthcoming release of Dark Trails. Even some of the films from the Hammer Horror revival have wonderful bits of meat on their bones. Beyond the Rave has some sinister inspirations that can be used to shade a horror-themed Xcrawl and the dark ritual found in Wake Wood certainly can find its place in any setting.

With output spanning two millennia, Hammer continues to put out entertaining films that drip both blood and inspiration, that both titillate and terrify. The legacy of this studio only continues to grow as the OSR revives some of the best ideas of Hammer, filtering and shaping them for the next generation.