In early September, my wife, Suzi Markham, and I vacationed in Yellowstone National Park. It was an awesome week, and very inspiring. There are countless types of inspiration to be found in Yellowstone, but in this article, I’ll focus particularly on things that got my adventure-writing juices flowing. Along with an account of our journey, I’ll share some of our pictures. The vast majority of these, and certainly all of the good ones, were taken by Suzi.

I sometimes use real places as foundations for the fantastic. Much of my mental landscape for the Purple Planet boxed set, and for The Rock Awakens, was inspired by New Mexico’s Kasha-Katuwe Tent Rocks National Monument. A trip to Yosemite National Park’s Happy Isles Fen inspired the landscape for Escape from the Shrouded Fen. And, this trip to Yellowstone inspired quite a few features of an upcoming Goodman Games Dungeon Crawl Classics RPG adventure to be published. 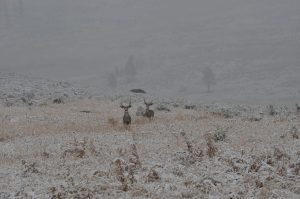 Once we arrived in Yellowstone, we quickly established a routine: early morning trips to spot wildlife, then afternoon excursions to view scenery, then dusky trips for additional animal viewing. One of our favorite places to see native fauna was Hayden Valley. Our first morning drive was special. The ground was powdered with snow, and fog hung low. We were moving slowly, taking it all in, when two mule deer bucks came sprinting out of the mist. The scene was beautiful, and had a surreal, ghostly quality. Suzi took a nice picture of them coming towards us (then we got out of the way!). 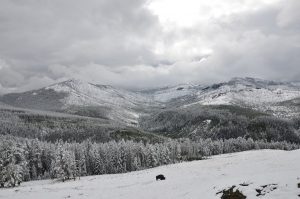 Dunraven Pass is Yellowstone’s highest road, and was our route to get from Hayden Valley to Lamar Valley. The pass can get snow any time of year, and its 8900-foot altitude provides fantastic views. One day, after passing Mt. Washburn, we pulled over to admire the snow-covered landscape. Overcast cloudiness combined with rocky, snowy environs gave a grayscale tone to the scenery. There was a lone bull bison below us, sweeping his giant head back and forth in the snow to reach the tasty grass underneath. Awesome. Also on Dunraven, we were fortunate to drive by two adolescent grizzly bears frolicking and foraging by the road. What?!? We stopped to take a few pics, but were concerned that we didn’t see Mama Bear. We did not want to inadvertently get between her and them, so we didn’t linger. 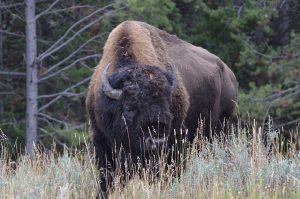 Lamar Valley provided more bison and pronghorn than we could have hoped for. We had to stop the car on the road and let an entire bison herd cross. It may be the only time that I liked being stuck in gridlocked traffic. Of course, I’m not going to honk at a 1-ton animal with horns. The adults are incredibly majestic (rightfully the national mammal of the U.S.), and the calves are cute. Unlike the bison, pronghorn were wary, and difficult to approach. They have the distinction of being the world’s second-fastest land animal, being only slower than a cheetah. However, they have more endurance than the cats, having evolved from prey for the Pleistocene’s American cheetah. Suzi and I once petted a cheetah (that’s another story), and the experience was like touching rock (muscle) covered in felt (short fur), which purred like an idling Harley (could be Davidson, could be Stroh). Pronghorns are anatomically very different, yet they are built for speed. Their bones are light, they have shock-absorbing toes at the tips of their hooves, their hair is hollow, etc. We spent about a half an hour watching one male play with his harem of six females. 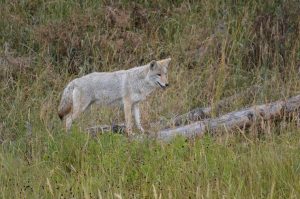 A coyote on the hunt

If Suzi and I had to pick a favorite wild mammal, we’d probably settle on the wolf. We achingly wanted to get some good wolf sightings, but the best we could do was through binoculars at a few miles, at dusk. The only reason we could see the wolf against the landscape was because it was black. However, a close relative (of a wolf, not of ours) took pity on us. As we drove through Hayden Valley, we beheld a large “silver-tipped” coyote feeding on rodents. Amazingly, the creature cared nothing about us, or the 50 or so cars that pulled over to watch, or the rangers that held crowds safely distant while keeping traffic moving. It focused solely on the hunt. Unlike a wolf, and more like a fox, it would stealth and pounce, diving almost vertically to get prey. Many mice fed the coyote that day. 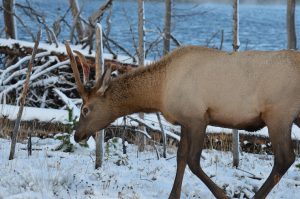 Of all our dawn experiences, the coolest was having a large bull elk walk by the car, and begin to bugle. Sadly, it was too dark to get a good photo, and my iPhone recording didn’t have enough volume. The sound is amazing; it has a chill-inducing quality, and is audible for miles. It’s no wonder that cows are attracted to a loud, frequently bugling bull. Since my recording isn’t practical, here’s Wikipedia’s. We also saw some elk by Yellowstone Lake, including a young bull with bloody antlers, and about a half-dozen cows. 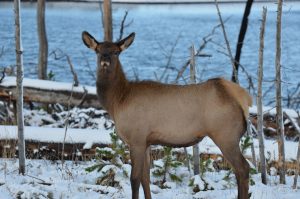 Besides the wildlife, the history of Yellowstone is amazing. I’m not talking about the “Yellowstone became this nation’s first National Park…” kind of history. I’m talking about the “this park was formed by massive volcanic eruptions blasting away mountain tops” kind of history. The park sits on an 8000-foot high plateau in the Rocky Mountains. It contains four huge overlapping calderas that resulted from “supereruptions,” one of which was 6000 times larger than 1980’s Mt. St. Helens, with ash traveling all the way to Missouri. Here’s the thing: the magma’s still active. The obvious signs are the geysers, hot springs, small earthquakes, etc., but there are subtle changes too. 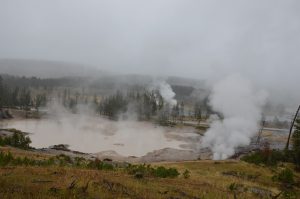 Magma continues to push up from beneath, and the caldera’s floor (i.e. “the park”) is slowly rising. There are resurgent domes where the ground moves up or down depending on fluctuations of the magma chamber beneath. Hayden Valley sits within Yellowstone Caldera, and its Mud Volcano area is near where the caldera is most active. We visited Mud Volcano Trail, and were entranced by the springs, mud pots, and fumaroles. Also along the trail are Dragon’s Mouth Spring and Black Dragon’s Caldron! 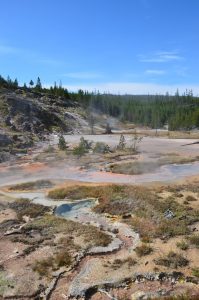 Having whetted our appetites with Mud Volcano Trail, we visited more of Yellowstone’s geothermal areas. These were my favorite features of the park. The next place we sampled was Artists’ Paintpots Trail. Viewed from above, the landscape looks alien, with pinks, whites, and reds meandering, bubbling, and steaming. 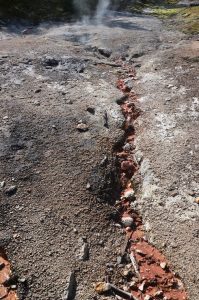 The river of “blood”

There was a stream of viscous, rusty liquid that I named “the river of blood,” which got my imagination rolling.  The highlight, however, was a hypnotizing, white mudpot. When I finally broke free of the trance, I made a movie.

Those who know me know that I’m shorter than average, so I had to stand on the safety fence to film without getting any human constructions in the frame. (SAFETY NOTE: Do not stand on safety fences next to scalding, bubbling mud.)

There were also cool ring patterns in the microbial ground covering; we took pictures of the reddish ground’s rings, and of similar features in the green lichen/moss surrounding a tree. Miniature alien crop circles, obviously. The pots’ and springs’ colors and textures were gorgeous; the rusty reds could be quite vibrant! The border between green life’s encroachment and the geothermal regions was also beautiful.

I’ve been talking a lot about what we saw. I should describe what we smelled. Often, the strong stench of rotten-eggy sulfur (hydrogen sulfide, specifically) loomed around these features. The gas that comes from the fumaroles is stinky, and so are the mudpots. Microorganisms living in the pots use the smelly gas as energy, and convert it into sulfuric acid that melts the rock into clay or acidic mud. Now that’s a monster that needs a stat block! 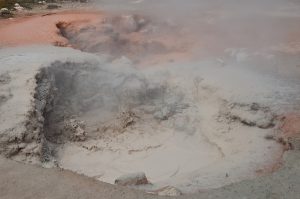 Seeking more mudpots, we found ourselves at Fountain Paint Pot Trail in Lower Geyser Basin. This region had a cool pair of pots, white and red, right next to each other. It also had a sense of post-apocalyptic desolation.  There is a view that particularly struck me, where I looked out through dead trees, and saw a steaming, gurgling, white wasteland. Speaking of trees, Suzi found one that had fallen on its side, and exposed its root system. It looked like a creepy, wooden, tentacled beast of some kind. I named it “wood spider,” but it has more than eight legs! 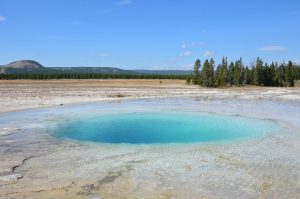 The next thing on our agenda was (what I think is) Yellowstone’s most beautiful geothermic marvel. I’m not talking about Old Faithful; that geyser doesn’t do a lot for me. I’m talking about the Grand Prismatic Spring. The surrounding Midway Geyser Basin has other gorgeous springs, some are turquoise bordered by white, and some are bright green. 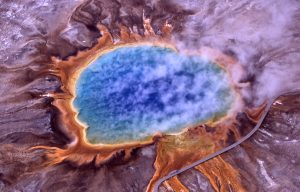 However, none match the splendor of the Grand Prismatic Spring. To truly appreciate it, one must see it from above. We couldn’t fly overhead, but Wikipedia has a nice aerial shot. Even at ground level, it’s breathtaking. We took so many photos that it was hard to choose only one. The spring is 160 degrees Fahrenheit, 370 feet in diameter, 160 feet deep, and is the largest hot spring in the U.S., and the third largest in the world. The colors are due to tiny microbes as well as the runoff’s changing temperature. Colorless, and yellow organisms grow in the hotter waters, while orange, brown, and green grow in the cooler. 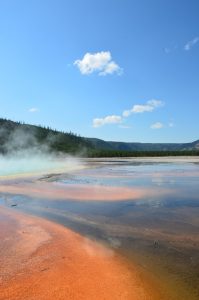 The tiny microbes in hot springs are called “thermophiles” (heat lovers) or “hyperthermophiles” (extreme heat lovers). I must digress from Yellowstone for a moment to discuss the most awesome of the hyperthermophiles, Strain 121. Even the name is awesome! Strain 121 was discovered in 2003 in a deep-sea hydrothermal vent, and is notable because it can reproduce at 121 degrees Celsius (250 degrees Fahrenheit). In fact, the temperature of Yellowstone’s Grand Prismatic Spring (160 deg. F, or 70 deg. C) is too cold for reproduction! Forget boiling for sterilization (212 deg. F, or 100 deg. C); as far as Strain 121 is concerned, that’s just getting the party started. Finally, this single-celled marvel “breathes” iron oxide (rust!) instead of oxygen, and creates magnetite as a byproduct. You’ll see a new creature in an upcoming adventure based on this incredibly cool (boiling?) lifeform.

I’ll close this “Real Life Adventure” of Yellowstone with an account of kayaking on Yellowstone Lake. The lake’s West Thumb region was formed by one of those aforementioned caldera eruptions. We were supposed to do a 3-hour group kayak sunset tour of West Thumb, but there were high winds, tons of rain, and the temperature was about 40 degrees F. The weather was so bad that nobody showed up for the tour, except for the guide and us. Wohoo, private tour! Because of the conditions, we have no photos, but the experience was incredible! We had elk cows running up to the lakeshore to inspect us, unsure of what we were. We paddled by geysers, hot springs, and fumaroles alongside the lake. However, the real treat was floating over the geothermal features beneath the lake! We paddled along, dipping our hands in the water. As we approached bubbles rising from below, the temperature rose from icy to hot. Contact Geyser Kayak Tours to do it yourself!

Yellowstone provided many ideas for adventures and critters, some of which you may recognize in my work to come. Here are some ideas that came to mind:

The inspiration of Yellowstone National Park is limitless, and even one day spent in the wild yields tons of ideas. It’s a bit of a journey to get to, but visiting is well worth the effort, and makes a fine Real Life Adventure.