An Update On The Rodneys Winners

Home » Latest News » An Update On The Rodneys Winners 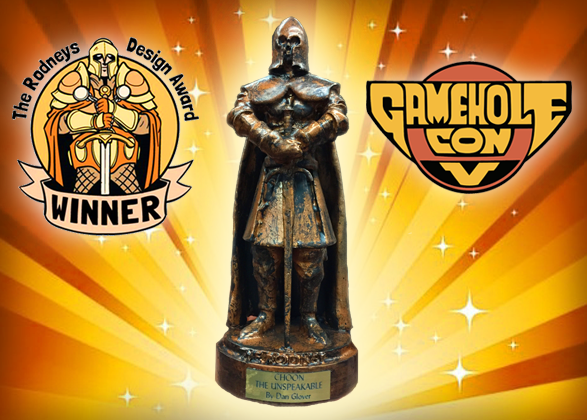 As many fans know, Gamehole Con happens each November in Wisconsin. Gamehole Con features an adventure design contest called the Rodneys, and Goodman Games in turn sponsors a “DCC track” in that contest. Here is an update on the Rodneys!

At Gamehole Con 2016, we had the pleasure of announcing that Dan Glover of Nevada won the 2016 Rodneys Award (DCC track) with his submission “Choon the Unspeakable.”

Goodman Games also agreed to publish the adventure that won the general adventure design track. We’re also excited to announce that we will be publishing “The Tower of Faces” by Nick Judson. Nick’s adventure won its separate Rodneys track in OD&D format but has been converted to DCC stats for publication.

Dan Glover’s “Choon the Unspeakable” is an ambitious adventure that utilizes time travel in a fantastical setting. This atypical adventure executes time travel mechanics in a way that can be enjoyably managed in a casual tabletop game, in an fantastic new way that we’ve never seen before. The manuscript is currently in editing. As the adventure progresses we will post more updates here.

“The Tower of Faces” is a setting-based adventure that sees the adventurers bound to do the bidding of a wizard in his home and sanctuary. It’s a fun series of encounters that all DCC players will enjoy.

This coming weekend, Gamehole Con is happening again – and we will announce the winners of this year’s Rodneys Award! We think this is a fitting time to remind you of Dan and Nick’s adventures, both currently in production.

Check back after Gamehole Con to find out who won this year’s adventure design competition!