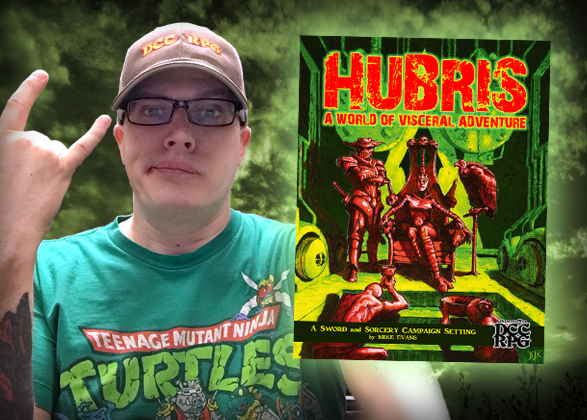 All month long Goodman Games has been giving some special attention to our third-party publishers, along with a special promotion that will get you an official ROCK GOD guitar pick FREE with the purchase any Third Party Publisher product from our online store! Offer good while supplies last. Today we turn our attention to Hubris: A World of Visceral Adenture by Mike Evans and DIY RPG Productions.

“Legend states that Hubris was created from the fetid corpse of a long-dead god. Hubris is a land of terrible creatures, grand inequality, strange and cruel gods, dangerous magic, opulent nobility, destitute commoners, people that have become corrupted and turned to savage beasts, constant wars, and worse.

The kingdoms are not kind or benevolent: In the Blighted Sands the Klind are slavers and openly practice sorcery, offering sacrifices to their depraved serpentine god, Set. Across the continent the Fairweather kingdom is governed by a corrupt and inbred royal family with the nobility following suit. Esenbar is ruled by a staunch xenophobic theocracy that tolerates little outside of their strict doctrine. The barbaric Ingvar of the Frozen Wastes wage vicious battles against the savage frost giants of The Crag, and care little about the goings on of the world; their life is cut from battle with an axe or sword. The Black Queen rules the citizens of the Floating Island of Terror from her throne of bones and dreams terrible machinations for Hubris. Shadowfall, built in the remains of the burrow of a gigantic worm, is ran by vampires and their thralls, and they welcome all who are devious, vicious and cunning.

There are no easily recognizable heroes in the world. You wander the wilderness or delve into ancient ruins: out of desperation, some crazed need for adventure, or for some bizarre belief that the world can actually be made a better place. Though civilization offers you security and comfort, you shirk those in the hopes of gaining riches and power. But when you die, no one will sing songs of your deeds. You will die a horribly bloody death at the hands of some twisted abomination or by the knife of an assassin sent by some fat, scheming noble.

Your epic tale will be forgotten in days as the dangerous world continues on without you and the apathetic masses stay complacent to dogmatic control of their government.

This is not a fairy tale or an epic ballad. This is a savage world. This is Hubris.” 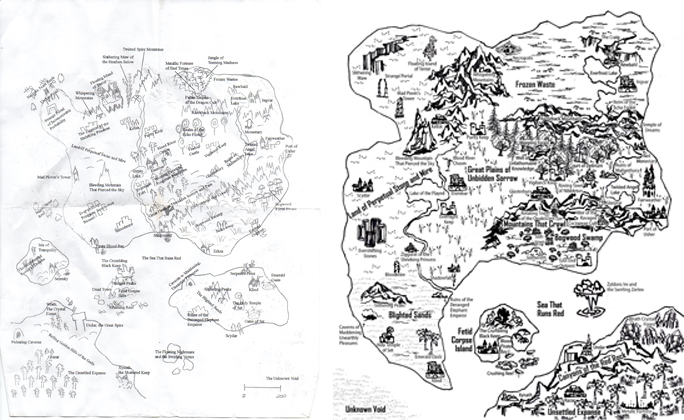 The original Hubris map I drew before it was saved and made WAY better by my wife, Angie.

Hubris is a weird fantasy setting which uses the awesome Dungeon Crawl Classics rules!  In this book you will find 10 territories filled with tables and charts to generate interesting locations and encounters, new occupations, 4 new classes, 5 new playable races, 3 new spells, 4 new patrons, including 3 patrons spells for each, 11 new and terrible gods, 14 tables and charts for a GM to use to aid them in their game or create interesting/fun situations, two new adventures to kick off a campaign, and 51 new enemies (including enemies that are unique thanks to random generation).  Hubris is hackable!  Each territory can be used as the GM wills!  Hubris is 350 pages stuffed full of great art and handy tables!  It is available in hardcover, softcover, and PDF. 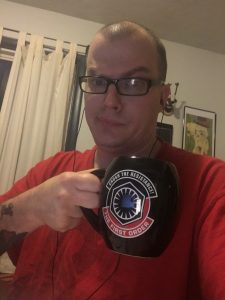 Every morning– cup of coffee, heavy metal music, and writing before work.

When I started writing Hubris, it was originally intended just to be something thrown up on my blog- but Jez Gordon encouraged me/pushed me to publish it, so I figured I’d give it a go.  Then I had to figure out what mechanics to use.  I started creating my own ruleset (put it up on my blog as well), but then I started reading DCC and my mind was blown!  It was what I had in my brain- heavy metal awesomeness of Warhammer and delicious Appendix N stuff mixed with simple 3.x style mechanics!

Once I had settled on using Dungeon Crawl Classics, I started reaching out to DCC guru’s like the amazing Harley Stroh (who deserves a major shout out for how approachable, excited, and awesome he has been with me over the years) about how to approach DCC, the feel of it all, pros/cons of it, etc.

I gave myself outline goals/hard stops for the project and then began writing.  I wanted to write Hubris from the ground up with DCC in mind and not “here’s my setting with DCC bolted on.”

Writing Hubris and everything took four years- was awesome and stressful, but I learned quite a bit about the whole publishing process!

My inspirations for Hubris was punk rock, 80’s and 90’s metal, books like Conan the Barbarian and Cthulhu, Hellboy and Mike Mignola art, and movies like Evil Dead, Army of Darkness, The Thing, Tetsuo: Iron Man, etc. 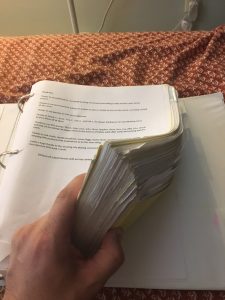 This is the original manuscript of
Hubris.

I playtested Hubris for over a year before I was satisfied with the mechanics and the feeling of the game.  I was running two groups through Hubris at the same time and it was tons of fun.  My favorite point was actually the first session- my players didn’t know what to expect at all and came across an ancient and forgotten altar to a demi-god.  One player, playing an Avarian (anthropomorphic birdman) decided to pray before it and was mutated- gaining a huge hump on his back filled with fluid and a tentacle arm (couldn’t fly any longer) and then humans mutated with tentacles coming out of their stomachs, mouths, and eyes attacked.  Nearly the whole party was killed in the first fight, but the wizard and the other Avarian were able to survive and revive some of the group.  The encounter and having one of their own instantly mutated freaked them out.

They decided that being out in the wilderness was too dangerous and fled to the nearest capital city, Fairweather, to adventure (and be safe).  They then discovered that this was not the case as the Metalphage plague was running rampant in the capital and there were other dangers lying beneath the surface.

Throughout a year campaign over 100 red shirts were killed and about 15 PCs.  Good times.

The GM can use Hubris at the table to generate the world and adventures.  The book is hackable- take what you want and throwaway the rest.  I tried to put the full DIY philosophy behind making Hubris (which is important to me in all my books). 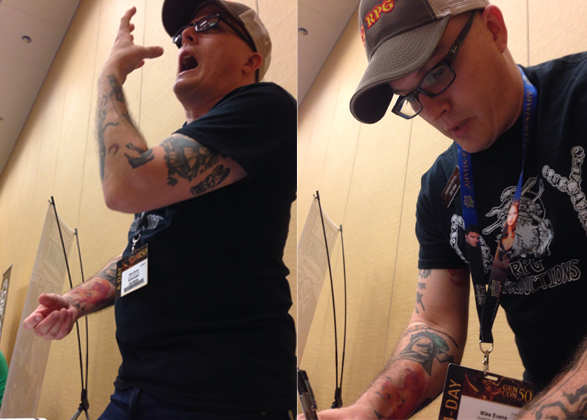 Hubris just won the 2017 Silver ENNIE for Best Electronic Book, so it can’t be ALL bad… right?!

Be sure to check out Hubris: A World of Visceral Adventure from DIY RPG Productions!