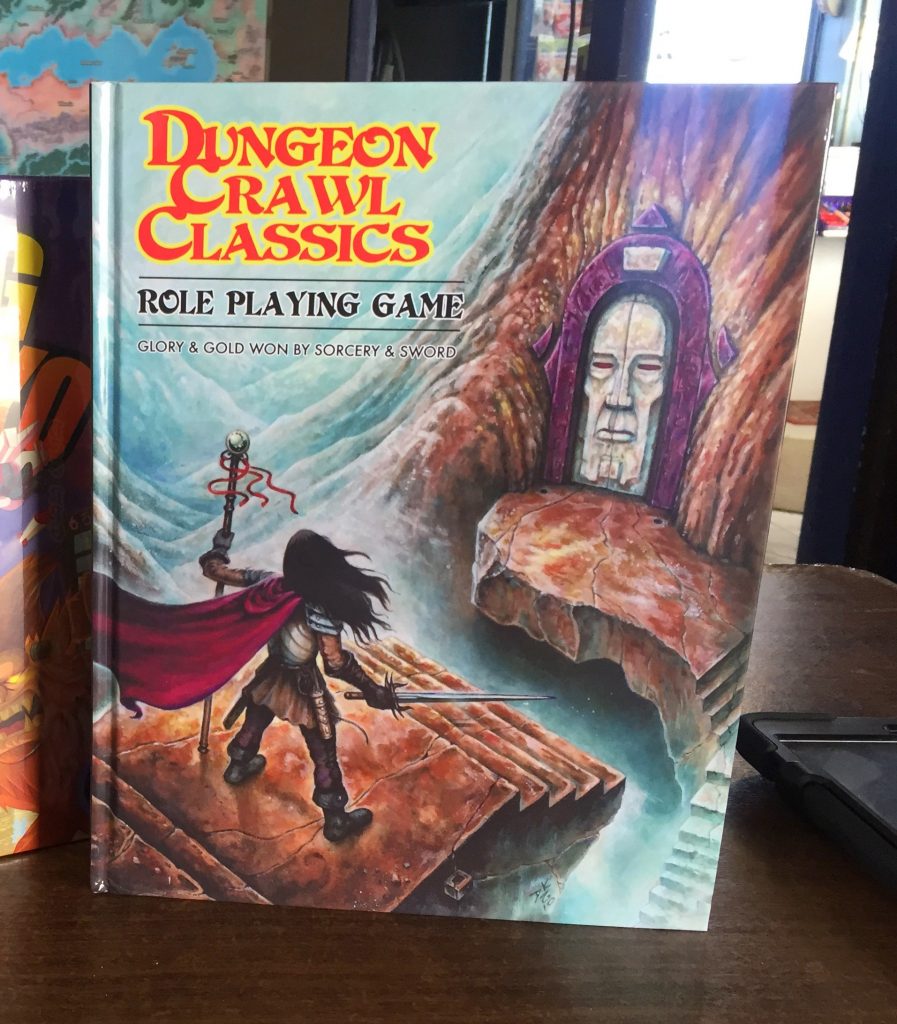 Spoiler alert! For everything I have ever written for DCC, and a few things I have yet to write.

DCC is the most metal game I have ever played. And to me, the music of the book is every incarnation of Black Sabbath.

My first encounter with Dungeon Crawl Classics as a fully-formed thing was a pair of playtests Joseph Goodman ran at a hobby shop in Atlanta. We played the adventure that would become Portal Under the Stars, and a higher-level adventure that might have been the prototype of 13th Skull. I had fun – I liked the easy-to-pick-up mechanics, I loved the idea of a character funnel. Even when my wizard failed his most important spell check, thus flubbing his betrayal of the entire party and opening himself up for a well-deserved death at the hands of his rightfully outraged former allies – I was excited at the possibilities of the spell system. I remember thinking, Joseph really has something here.

I didn’t fall in love with DCC until I held the book in my hands. Before I had a copy I thought I understood the game, but I did not. I did not understand Dungeon Crawl Classics until I saw the rules together with the art and the maps and the layout – and even the fonts. That’s when I heard that power chord in my head that made me go make my first metal playlist in years, which began, ended, and was mostly populated by Sabbath.

An extremely simplified story history of my complicated history with music, particularly metal: I grew up on Long Island, New York. Music was everywhere, and I dabbled with everything on the radio – rock and roll, new wave, R&B, the jazz-rock bands like NRBQ and Steely Dan my uncle played constantly. But my heart belonged to disco and early hip-hop. Rock and roll was old people’s music, and even when I enjoyed it I wouldn’t admit it for fear of seeming uncool (unless I was around my gamer buddies, who were almost all rocker kids).

I knew nothing about metal until I discovered Ozzy. In what would become a pattern in my life, I started to hear about how satanic and vile Ozzy Osbourne was, and so I had to go out and hear his music for myself. 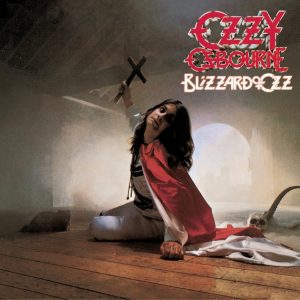 Blizzard of Ozz blew my mind, and it led me to seek out a whole new kind of music. In the course of one summer I went from mostly listening to Earth, Wind, and Fire and Run-DMC to Judas Priest, Iron Maiden, and of course Black Sabbath.

Sabbath was special. Back in 1983 I’d buy any issue of Circus or Cream magazine with anyone who had anything to do with Sabbath on the cover. Their music hit me on an elemental level – I think it’s really Tony Iommi’s guitar. I’m not a musician or a music theory person, but Tony Iommi’s guitar playing tells a story – I hear pictures when he plays, pictures of horror and wonder. He created the kind of landscape in my mind where you would find demons, evil cults, and yes, dragons and their ilk.

My metal phase was intense and brief. In 1985, I was a sophomore in high school and I started listening to punk. Hair metal was huge in my high school, and the whole scene left me cold. It’s pretty hard to take bands like Whitesnake and Motley Crue seriously once you get into The Clash and Black Flag.

Fast forward twenty-five years or so. I’m holding the Dungeon Crawl Classics Role Playing Game in my hands for the first time, and the music rises in me, unbidden. This game sounded like Dio, and Grim Reaper, and Armored Saint, and of course Black Sabbath.

I was deeply in love with DCC. I wanted in, I wanted to write an adventure. I sent Joseph my first pitch for the adventure I was calling To Challenge One’s Stars on June 20, 2013. We went back and forth over a few details but I finally got the Dark Master’s thumbs up.

Came time to sit and write it, I made a playlist.

Writing music is ever so important, and every project demands its own soundtrack. I remember making up a playlist and the first song on there was Sabbath’s Am I Going Insane, then filling it in with every metal song I had on iTunes at that point. If you want to recreate it, go with about half Sabbath, and the other half your favorites from Judas Priest, Iron Maiden, and the song “Vices” by Kick Axe (which Doug Kovacs once described as “clown music”). 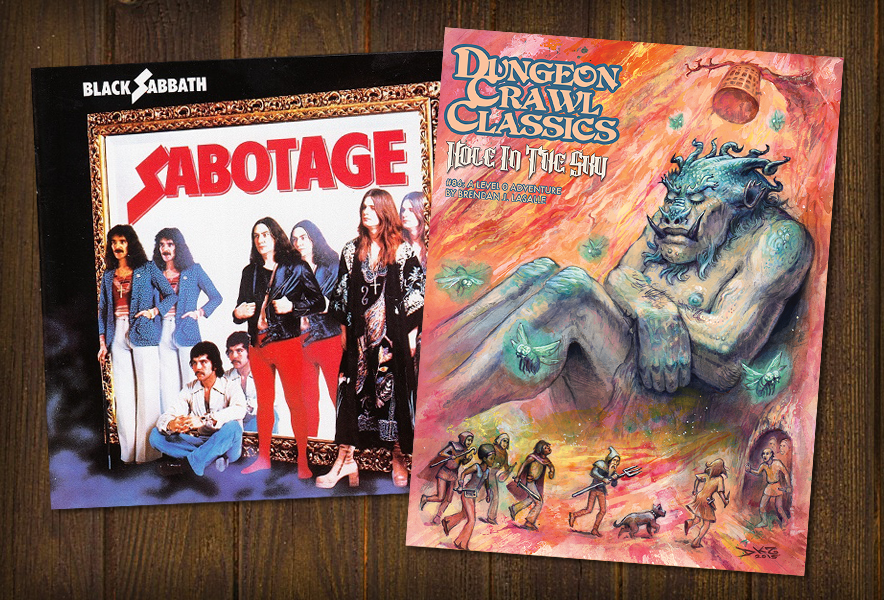 Usually, writing music is just background. This time, it took over. Eventually I abandoned the playlist and changed it to Black Sabbath’s Sabotage on constant repeat through development, writing, and editing. The first track on that album is Hole in the Sky and at some point, that became the theme of the entire adventure. Looking back at my original pitch, Hole in the Sky was one of the alternate titles I suggested, and I think that even before I had really deconstructed the lyrics to that song and decided to let them be the master of the entire adventure, the song was in the back of my head, Ozzy’s vocals and Tony Iommi’s guitar interweaving:

Here come the spoilers: In Hole in the Sky, a patron of chaos uses a false face and name, and convinces the characters to go on an acutely dangerous mission from whence there will likely be no return. They must journey to the terminus of an invisible bridge, wait until a portal to another world aligns with it, and pass into this strange world. All the while, the chaos patron remains safe, hidden, and anonymous in its extra-dimensional prison.

All of the above is inspired by the song, obviously. I’m a firm believer in proudly displaying one’s influences, and you can’t get much prouder than this. It’s like I was stuck for an adventure idea one night and just decided to run the record’s liner notes.

A fact which I am absolutely fine with. In my mind, Sabbath and Dungeon Crawl Classics is a genius pairing. Some RPGs overtly try to incorporate specific musical themes, with mixed results. The marriage of music and RPG is probably so good in the case of DCC because it isn’t listed implicitly in the text – it comes to you subtly through the incredible art work.

Roslof, Kovacs, Mullen, Laforce, McDevitt, Otus, McAusland – one could go on and on. Flip through the DCC book and see how many illustrations could be metal album covers. Or background paintings for the next iteration of Heavy Metal The Motion Picture. Or murals on vans that you just know are rocking Blood Ceremony or Electric Wizard through speakers installed in 1974. 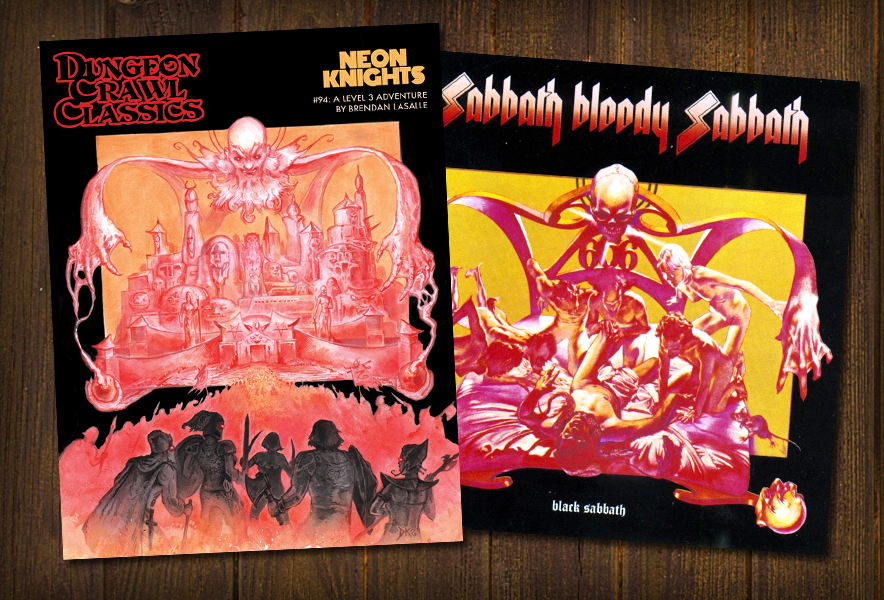 My personal favorite is the cover of Neon Knights, of course. Modeled after the Sabbath Bloody Sabbath cover, the cover of my second published adventure for the DCC RPG is to my eye the perfect blend of Metal and RPG mayhem. I love this piece of art. If a GM came to me and said he was going to run Neon Nights in ten minutes and asked for how to prep for it, I’d say spend five of those studying the cover, which does what art does best: conveys a lot of information in a single, hypnotically beautiful image. I love how the architecture of the city lets every visitor know that forces greater than themselves are at work. I love how if you look carefully you can see the flash of pink around the fore-figures’ eyes.

Once again, the lyrics of the song informed the adventure (swap “sea of lights” for “sea of dust” and it’s very close indeed). I had been thinking about a story where the players were the subjects of a summoning charm for some time, and once again the metal imagery of DCC put me in mind of Black Sabbath, and Neon Knights became my inspiration and guideline. Black Sabbath cover art also informed the story – the canonicals are based on the vile figures from the Mob Rules cover, the neon trails the PCs leave in their wake are based on the bizarre cover of Paranoid. 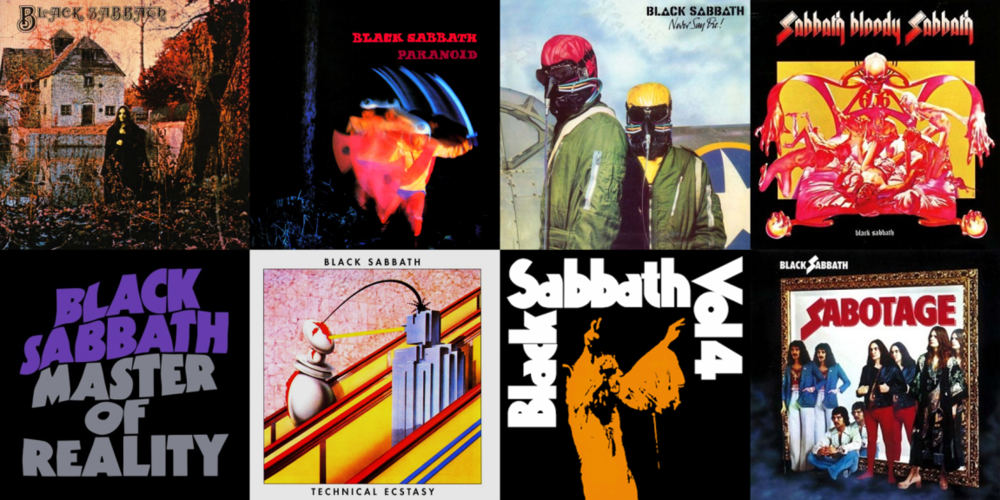 This will not stop. I’m running three other Sabbath inspired adventures these days – Symptom of the Universe, Into the Void, and Behind the Wall of Sleep. Symptom is the next one I’m going to try to write – I’m very fond of that adventure, and it’s named for and deeply inspired by my favorite of all Black Sabbath songs. I may not ever try to write Behind the Wall of Sleep and Into the Void – they are almost too weird to chronicle, and can only exist as flashes of story told by a handful of folks holding dice. I’m fine with that.

DCC and Sabbath are permanently fused in my brain, and when I play and when I run I hear the music, that dark, moody, bluesy, so so heavy music that puts me in mind of a world with danger and tragedy, and demons and weirdness, and darkness falling on all sides, threatening to turn the whole world, the whole universe, black.