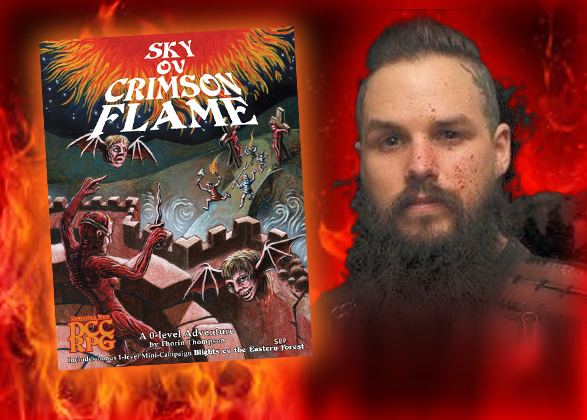 As you may already know, Goodman Games offers a free license for creators to self-publish their DCC creations, and this month we spotlight community members whose DCC creations have added great new options for players and judges alike. If you purchase any DCC RPG product this month, you’ll get a free DCC guitar pick. This time up, we’ve got Thorin Thompson talking about Sky ov Crimson Flame!

It began with the sudden disappearance of Belesa, the raven-haired beauty of Reed. Then others began to vanish! One by one, friends, loved ones and finally the children screamed out in the night and were lost… Now as the Horned Moon rises a thunderous sound ripples across the night sky and in its wake a Crimson Star ignites in the East! Those stolen must have been taken to the Ancient Keep – a place of dread that lies hidden within the dark boughs of the Eastern Forest. Even now, strange ululations cry out as fleeting shadows ride the wind! Who among you will brave the bowels of that foul Keep, where unspeakable horrors surely await, to save those that have been taken? 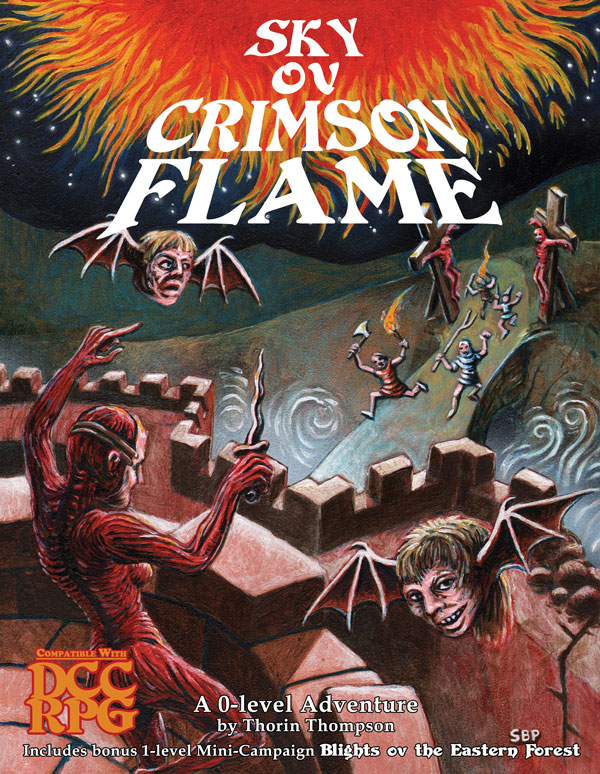 Sky ov Crimson Flame is a 0-level adventure written by Thorin “Son Ov Thrain” Thompson and published by Owl Knight Publishing. The adventure is 60 pages and features a bonus 1st level mini-campaign Blights ov the Eastern Forest that sends your adventurers on a dangerous missions to cleanse the evil that spawns from the very roots of the forest. Both adventures are packed with beautiful artwork, handouts, crazy random tables and even a bestiary of forest denizens! The adventure is available through several outlets, including Goodman Games online store.

“Hey everyone! Thorin Thompson here! When I was just a wee lad I had the pleasure of growing up in my father’s comic book shop. I watched as he ran players through AD&D games where howling laughter was the mainstay for every adventure! Little did I know at the time I was being subconsciously molded into the weirdo I am today! It would take years before the realization I could write and publish my own adventures, but once I read the Dungeon Crawl Classics RPG ruleset and found a community of third party publishers it all clicked.

“This adventure was inspired by the first session I ran using DCC RPG. I was literally making up the story objective, ancient keep, encounters off the cuff and, just like my father’s table before me, my players were howling with laughter as their poor 0-level characters were being slaughtered! After that I begin writing draft after draft until I felt it had the right amount of gorefest gonzo one might find in films like Evil Dead II, Dead Alive or Reanimator, but also the strange themes found in Michael Moorcock and Lovecraft literature.

“Like most, art has always been a defining factor in whether or not I would purchase a product and so when it came to the cover art for Sky ov Crimson Flame I really wanted not only to invoke one’s imagination, but also an “old school” aesthetic, because of this I choose Stefan Poag as my cover artist! To get some semblance of my idea across I drew a terrible sketch for Stefan, who in turn drew something immensely better. Stefan even provided me with two options and in the end it was his over-the-shoulder image I chose. 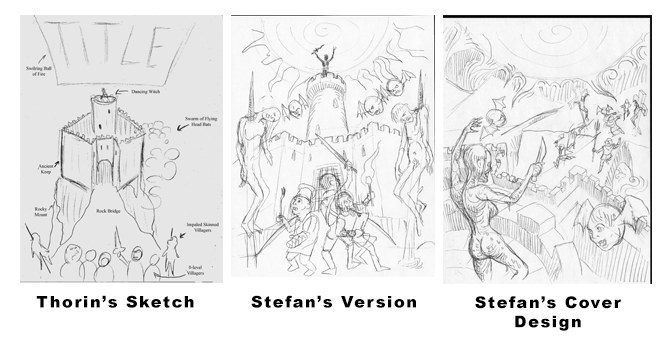 “For the interior artwork I choose a slew of artists from the OSR community, but most of the work, for Sky ov Crimson Flame anyways, was drawn by my girlfriend Jordyn Boci. We would sit down, put on some crappy 80’s fantasy flick and draw! I would sketch out something terrible, as I did for most of my artists, and she would, to the benefit of all, immediately draw it 1000 times better.

“One of the center pieces of this adventure is a nasty dagger forged from the fragment of a necromancer’s soul and hued of flesh and bone. In the beginning of the adventure it was a simple wavy edged blade that once belonged to the necromancer of yore, which is way the cover art depicts a dagger different from the final design. It took Jordyn and I a while to finally come up with the perfect disgusting design. 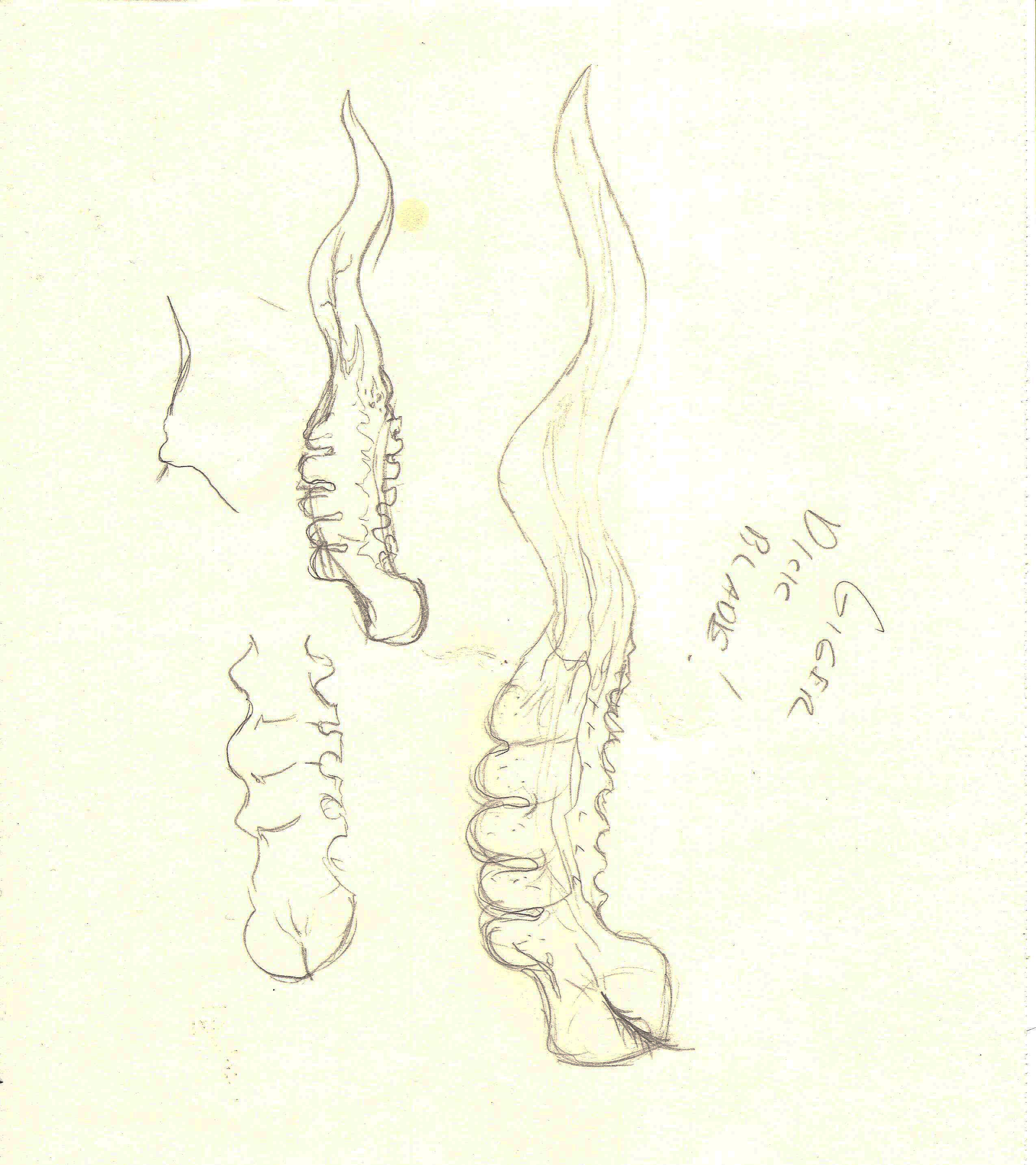 “When it came time to write more, due to the enthusiasm of my Kickstarter backers and stretch goals, I knew I wanted to flesh out the land surrounding the Ancient Keep depicted in the 0-level adventure. A lot of that material for Blights ov the Eastern Forest was written within a 3-4 month span. I had always planned to interweave my future modules into a single universe of sorts and it was a thrilling prospect to add history to and depth to what was otherwise a one shot adventure. Because of the quick turn around, I enlisted the help of Clint Bohaty of the Order of the Quill publishing to aid in fleshing out the history of the Eastern Forest and it’s forgotten king. The area called the Sanctuary of the Sightless Sisters was co-written by him and it’s one of my favorite areas of that mini-campaign.

“Publishing Sky ov Crimson Flame was a dream come true and I’m thankful everyday for the 420+ people that supported the Kickstarter and pushed me to further write the 1st-level mini-campaign Blights ov the Eastern Forest. If you’re still on the fence about this one? Well…

• 4 out of 5 Head-bats agree that, “Sky ov Crimson Flame is an instant classic!”

• The Witch of the Ancient Keep raves, “I had so much fun killing peasants, I flayed my own skin!”

“So my dear readers, if your table is craving death in the most grueling ways imaginable, why not grab a copy (or three) of Sky ov Crimson Flame! Heck! I might even tell you why I spelt ‘of’ with a V!”