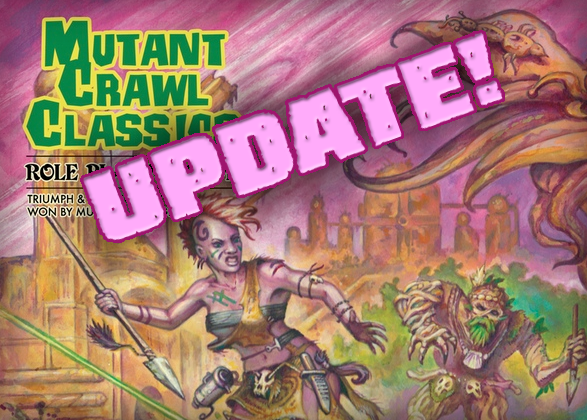 The next big thing from Goodman Games is coming to your world very soon. Let’s get you up to date where things stand with Mutant Crawl Classics!

What if you weren’t a Kickstarter backer? Don’t worry, you will also have a chance to play MCC. The modules will be made available to the general public at a later date, at the same time retailers can get them.

Hey, This Game Is Fun!

We have received great feedback on this initial wave of Mutant Crawl Classics modules. We hope you’re enjoying them! Tell us how your adventures go. And remember, if you run MCC games in a store, convention, or other public venue, you can earn free swag with the Goodman Games Road Crew program!

The Mutant Crawl Classics core book is at the printer. We are working with the printer on the prelim steps. Once we have seen and approved the proofs, we’ll be able to estimate a ship date. More to come as we progress! 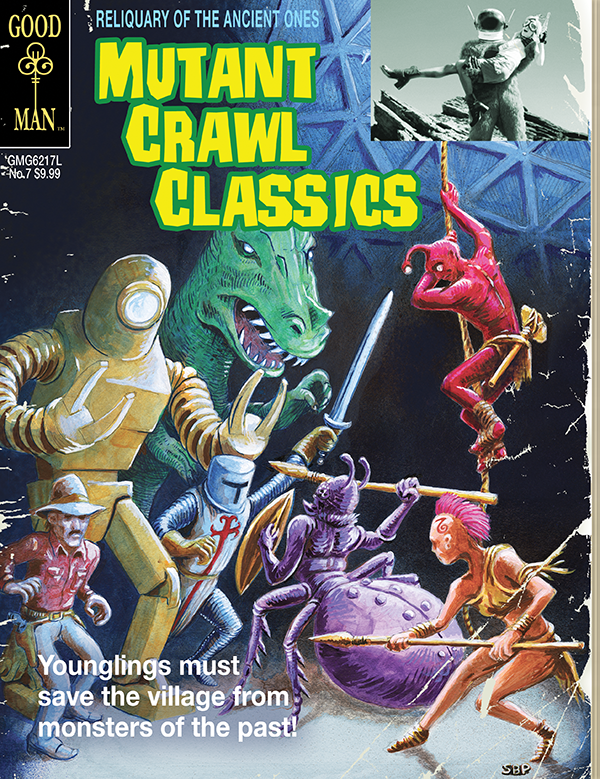 Sometimes inspiration strikes late in the game – and it did this time. Jim “Post-Apocalyptic” Wampler spends his days submerged in inspirational sources, and Gold Key comics rose from the ashes to strike his frontal lobe during the layout process. When we sent to MCC #7: Reliquary of the Ancient Ones to the printer, we added a short run of a limited-edition cover design in the old Gold Key Comics style. (Remember those?) It’s the same content as the regular module, but a special limited cover. This limited edition cover will only be available in print format, and only once the main release hits stores.

Although the main MCC book is at the printer, the dice are produced. The first wave of shipments, to international backers, just shipped out. Domestic shipments of MCC dice are being processed now and will go out soon. We will post tracking info to BackerKit as the shipments go out.

What’s Next for MCC?

At our “What’s New With Goodman Games” seminar at Gen Con, we alluded to a third Appendix N license. We’ve talked about Leiber and Vance, but there’s also ___________. Oh, and his work is a perfect fit for MCC RPG, so the first release for MCC after the Kickstarter shipments will be an Appendix N adaptation! Jim’s working on it now. Never fear, MCC fans, the post-apocalypse shall continue!