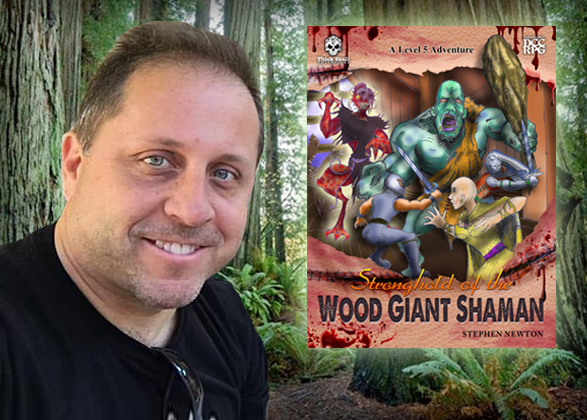 As you may already know, Goodman Games offers a free license for creators to self-publish their DCC creations, and this month we spotlight community members whose DCC creations have added great new options for players and judges alike. If you purchase any DCC RPG product this month, you’ll get a free DCC guitar pick. This time up, we’ve got Stephen Newton from Thick Skull Adventures, talking about Stronghold of the Wood Giant Shaman!

Wood giants—savage ancestors of hill giants—have descended from the forests of the Fulthon Mountains to harry and pillage human villages with impunity. Ferocious and feral, they kidnap the weak to sacrifice in their barbaric rituals. Decades ago, your ancestors—stout and brave adventurers of renown—eliminated a previous giant threat, and thus desperate people plead for the same heroism from you. But the threat this time is very different as a chaotic force lurks behind the scenes driving the savage wood giants towards madness. And if survival against a stronghold of ferocious giants wasn’t challenging enough, the machinations of facing an insane, immortal demon certainly will be… 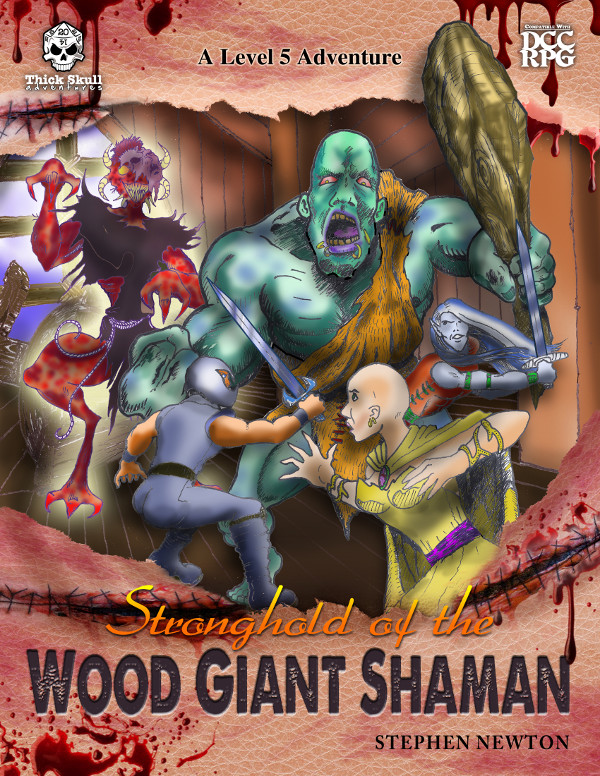 Stronghold of the Wood Giant Shaman is a DCC RPG adventure written by me, Stephen Newton, and published by Thick Skull Adventures. It was designed for 4-6 5th-level characters. It is a 28-page adventure available both in print and PDF.

I wrote Stronghold as a loving homage to a certain classic RPG module about hill giants. That said, I wanted to do more than just convert a module, I wanted to reboot the theme into the world of DCC. The giants in the adventure were uniquely created from the ground up, including using a d22 attack die and a new custom crit table. The stronghold will feel familiar to those who have played classic, giant-themed adventures, but will realize quickly Stronghold has been imbued with a distinct DCC RPG flavor including immortal demons and combat in an interdimensional plane. The adventure includes multiple, horror-themed elements that my adventures seem to be known for. As Judge Jeffrey Tadlock said when Spellburn episode 31 reviewed the adventure, “It really creeped me out!”

As the adventure is for 5th level characters, and most of my home group dies off or is retired by 3rd level, I tried something new to playtest which the players really enjoyed. We took their 2nd-level PCs and used the Purple Sorcerer Upper Level Party Generator to artificially promote a copy of those PCs to 5th level. I then ran both their 2nd level characters, as well as their 5th level characters on alternate weeks. As events unfolded in one future/past universe, the PCs in the other universe would be affected. For example, 2nd level PCs would foresee their upcoming 5th-level death at the hands of wood giants. Or a 2nd level PC who gained a magic item, would see that item appear in the 5th level world the following week. By creating these future versions of their existing PCs, the players were more invested than if they’d just rolled up some temporary PCs for the adventure. Given the difficulty of the denizens and situations, it took us eight sessions to get through the entire adventure.

Finally, if fighting a new breed of giants, facing demons, and the opportunity to roll your d22 don’t convince you, think of this: how often to you get to play a 5th level adventure? Fifth-level PCs are incredibly powerful and often can handle even the deadliest of foes, but a couple of good rolls by an angry wood giant can turn the tables quickly on even the stoutest of warriors. Go ahead and pick up a copy! For less than the price of a pizza, you and your players will enjoy many hours of both classic and DCC-style gaming. 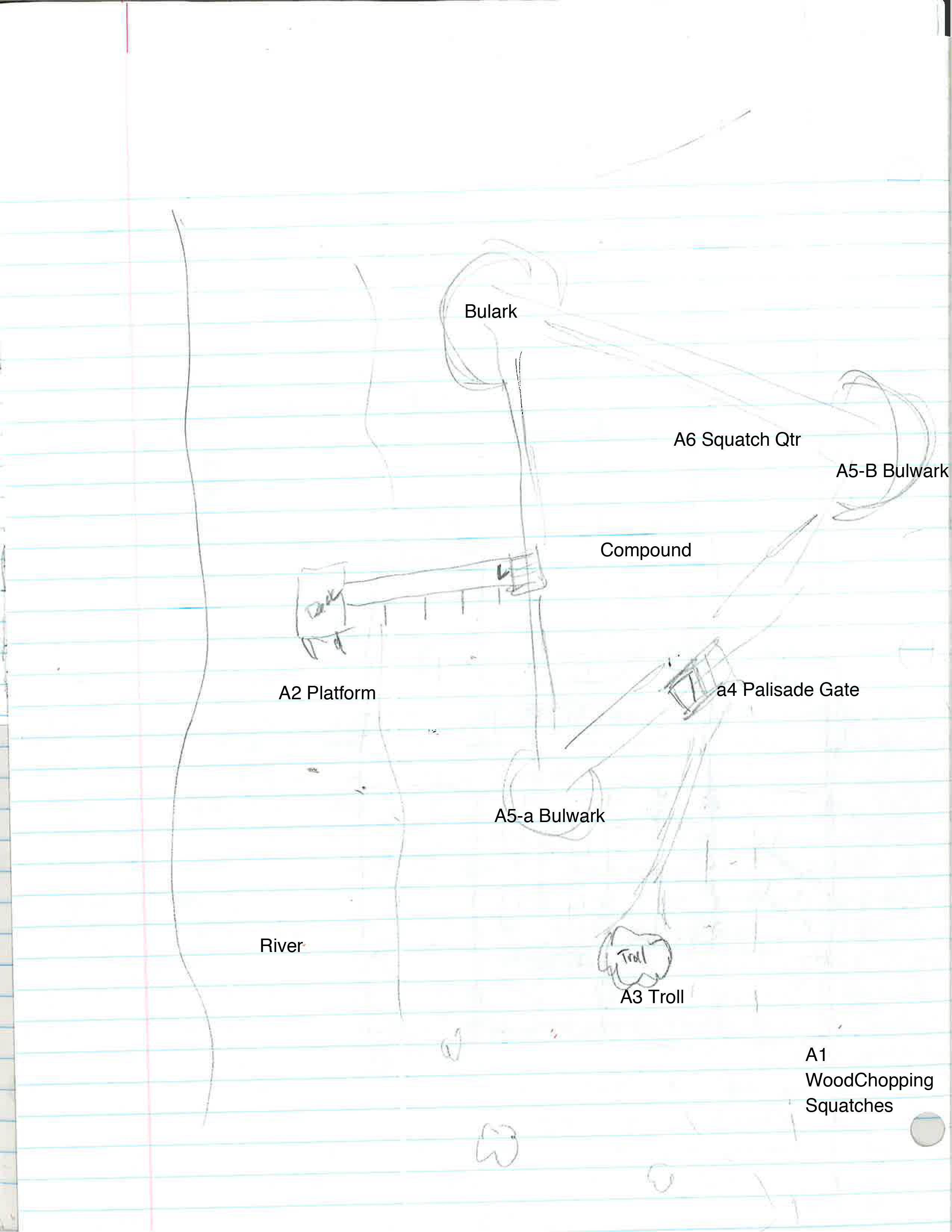 The original mockup of the compound holding the stronghold. I was inspired to design this way after visiting the 1607 Jamestown forte in Virginia.

The Blood Golem: I had recently discovered that my second-cousin, FRK Pyron, was a student studying art. I had only recently met Ms. Pyron once at a family reunion as I was in the middle of writing the adventure. As a family favor, I agreed to commission a small quarter page image for “the blood golem” which appears in the adventure – as I had no idea of what quality her work was going to be. When she sent in the first draft I was skeptical “Oh, I’m not sure how this is going to turn out… 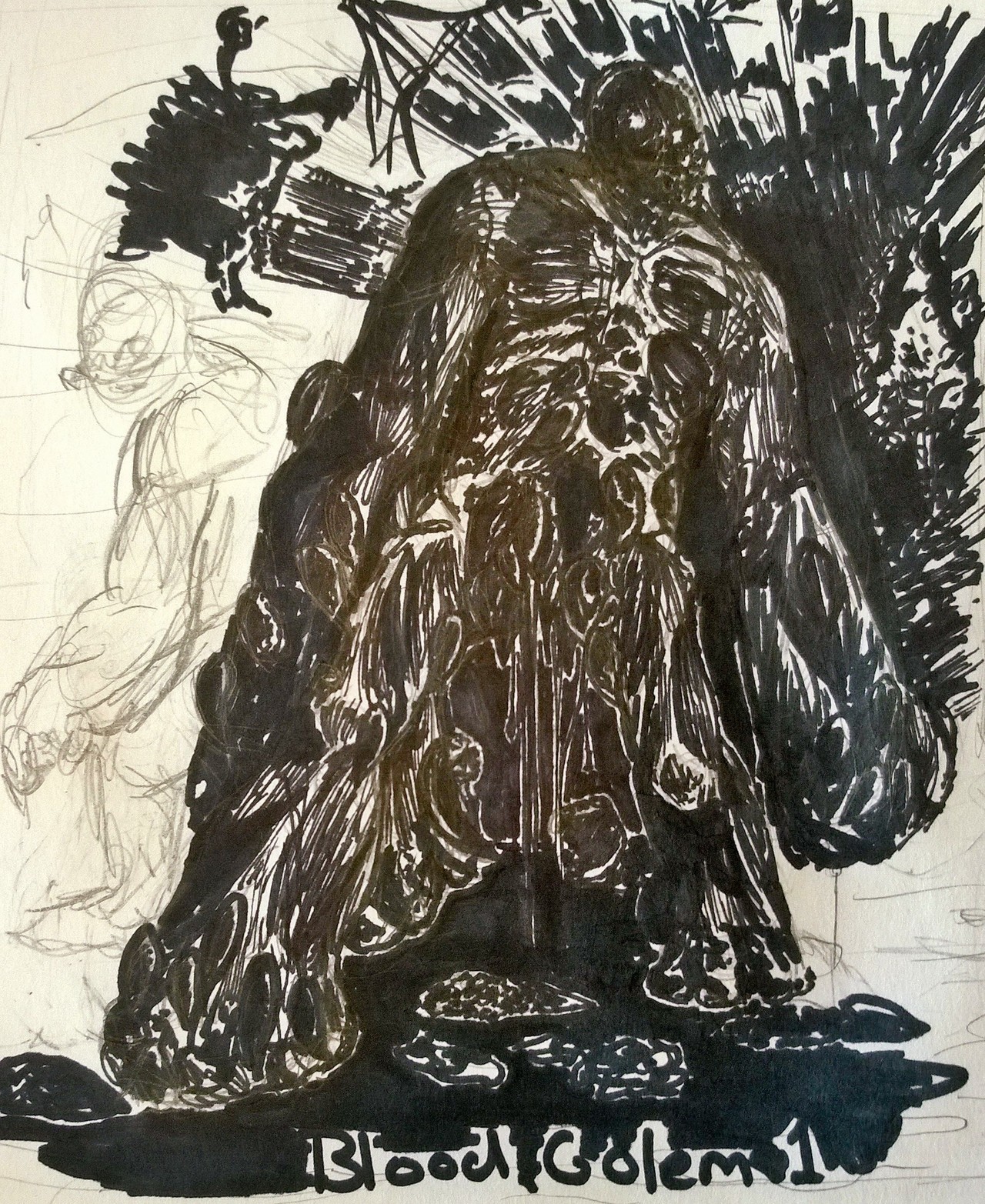 But I was so blown away by her final result I turned it into a full page illustration, and she’s been a regular contributor to my adventures ever since (including creating the cover for Children of the Fallen Sun). Final blood golem image: 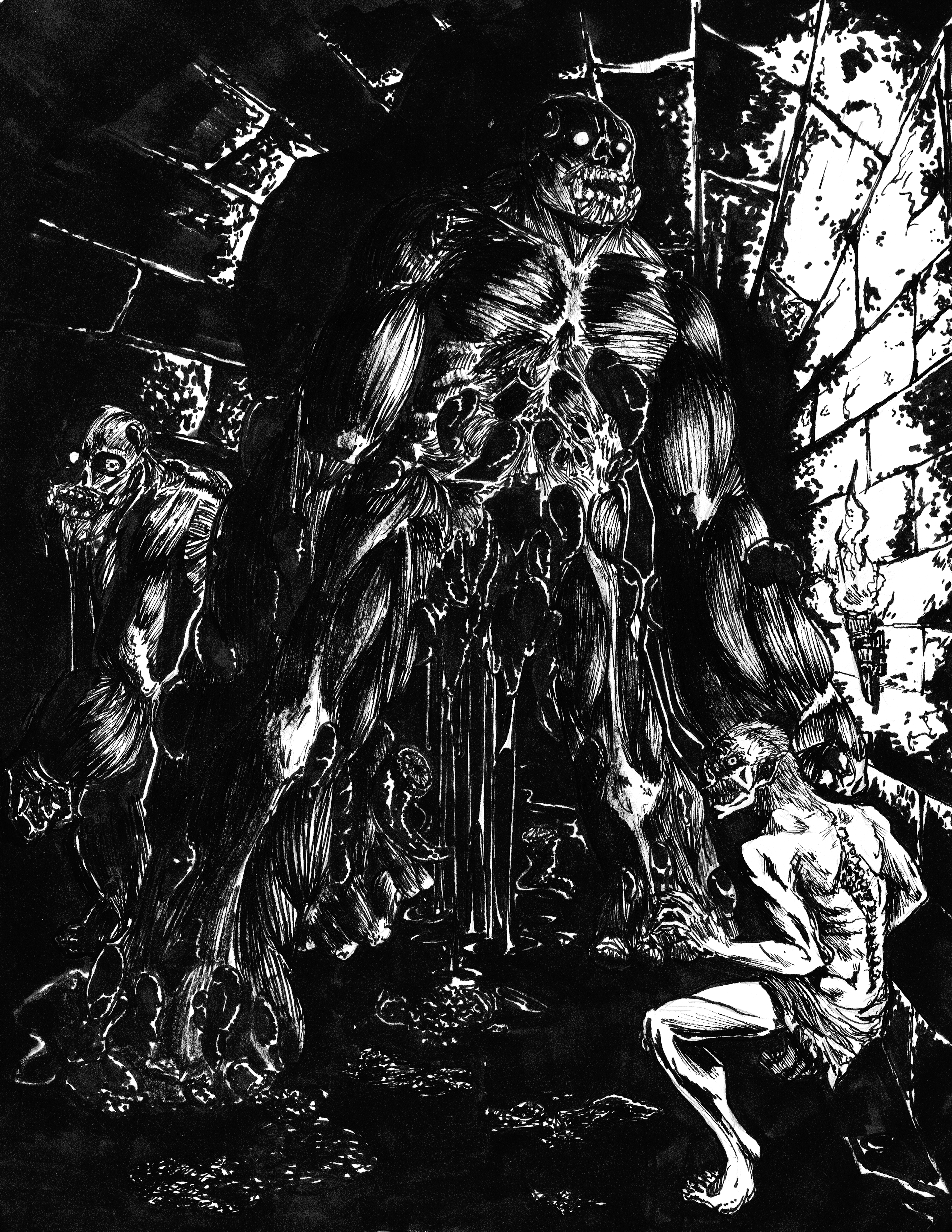 The Squatch Language: the slave-laborers of the wood giants are Squatches – a DCC version of sasquatch or Bigfoot. One of the original playtesters of the adventure, Josh Agee, is a professional linguist, and when the question came of “can we communicate with the squatches,” he took it as an opportunity to stretch his day-job muscles and came up with a linguist overview of both Squatch as well as other fictional languages. The opening of his resulting published paper follows:

Squatch belongs to the Ogro-giant sub-branch of the greater Disiysian language family. Prominent languages of the branch aside from Squatch are Ogrish and the Giant languages. The complete lack of biological relation of Squatches to either Ogres or Giants makes this a curious phenomenon as far as the general correlation of ethnicity and language is concerned, but a relatively common occurrence amongst the languages in the massive forested areas in which the Ogro-giant languages are spoken, due in large part to early language deaths of subjugated races which then form race-specific dialects of imperial languages that then drift in intelligibility, often becoming full-fledged languages. 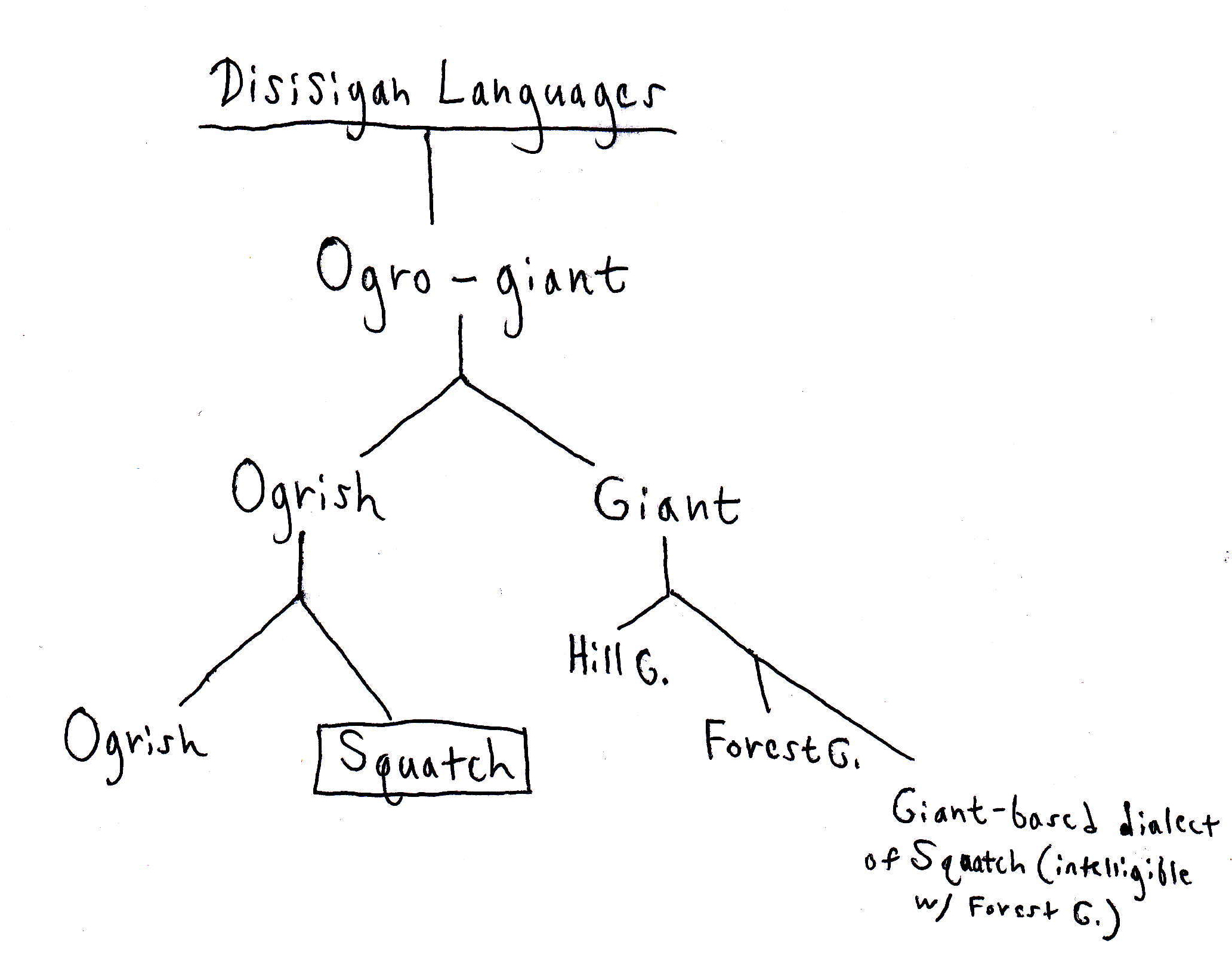 The entire paper including the phonemic inventory can be found linked off the Thick Skull Adventures Website.

Stephen Newton was also the author of “Floating Oasis of the Ascended God” in the 2nd printing of DCC #82: Bride of the Black Manse. And you can find the rest of Stephen’s work with Thick Skull Adventures in our online store.