An Update on “Into the Borderlands”

Home » Latest News » An Update on “Into the Borderlands” 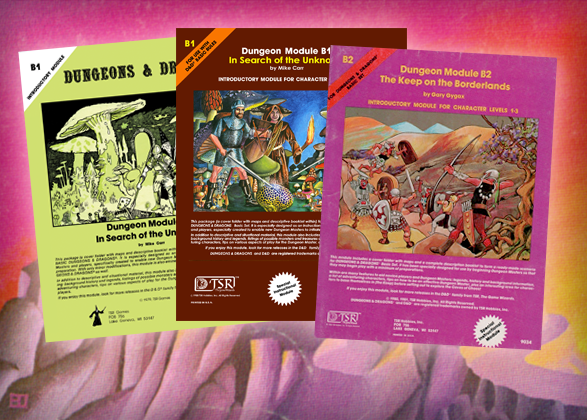 At Gary Con this year, Goodman Games announced a partnership with Wizards of the Coast to publish 5E conversions of classic D&D adventures, along with reproductions of the original 1E editions. The first two modules to receive this commemorative treatment would be B1: In Search of the Unknown and B2: The Keep on the Borderlands. Here is an update on this project!

As announced in our Gen Con seminar, the official title of this first installment in the series is Into the Borderlands. It will be published in hardcover format later this year.

A preliminary version of the cover art was unveiled at the seminar (you can see it at about 3:00 minutes into the seminar). The cover art is still under review and will doubtless change through the process, but gives a good idea of where we are going.

The content of the hardcover includes three main subjects. First, there are scans of the original modules. Second, there are 5E conversions of these adventures. And finally, there is commentary and memories. 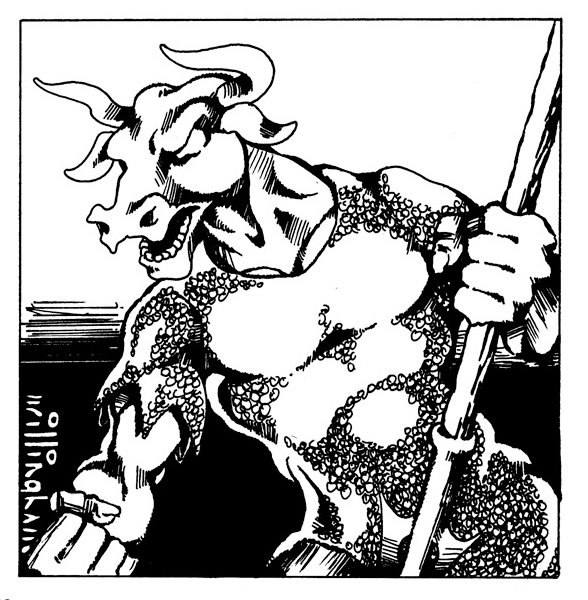 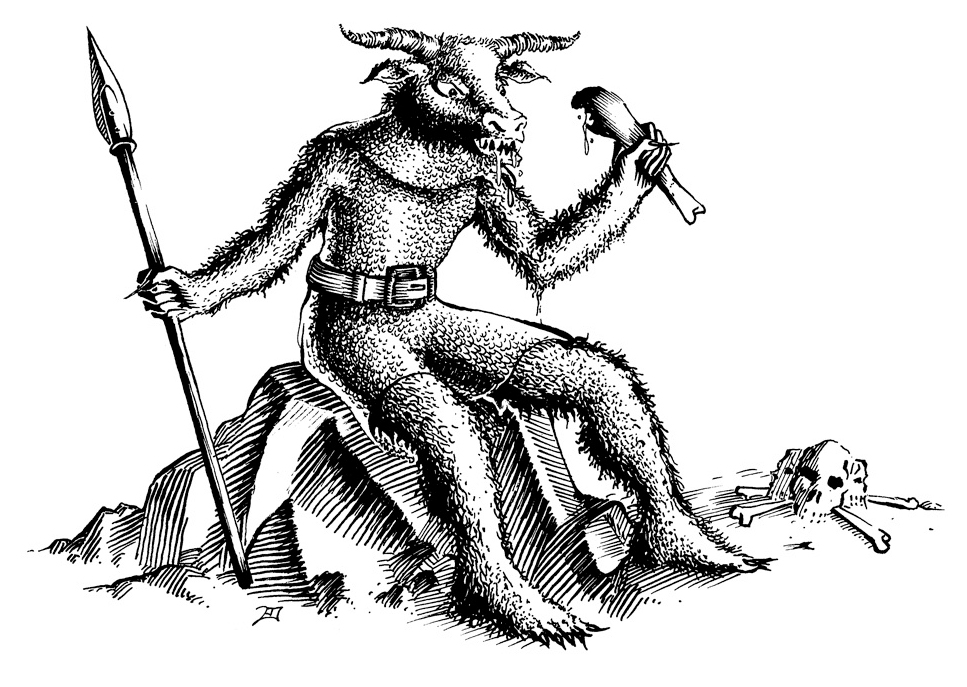 The scans of the original 1E modules are not as simple as they may seem. There were many printings of the original editions, and they varied in ways small and large over the course of their history. In particular, B2: The Keep on the Borderlands was published with strikingly different editions. For example, many of you may remember the minotaur image from B2. Everyone remembers that minotaur illustration, right? But the question is, which minotaur image? B2 was printed a total of nine times, and the first three printings featured the Erol Otus minotaur – while the subsequent printings featured the Bill Willingham minotaur.

Into the Borderlands presents complete scans of the second and fourth printings of B2. You can clearly see the evolution in the layout of the adventure, as several illustrations change over the course of the printings. Pages 5, 6, 7, 9, 20, and 23 are all noticeably different when compared side by side in Into the Borderlands, and there are more subtle differences as well.

In the process of reviewing and scanning B1: In Search of the Unknown, we dived into one of the more mysterious covers that TSR ever published. The cover art used on the first monochrome edition of B1 appears at first glance to be art done by TSR’s then-art director David Sutherland III, but carries the mysterious signature “DIS & DAT.” It also features a background quite unlike the typical Sutherland style. What’s the real story here? 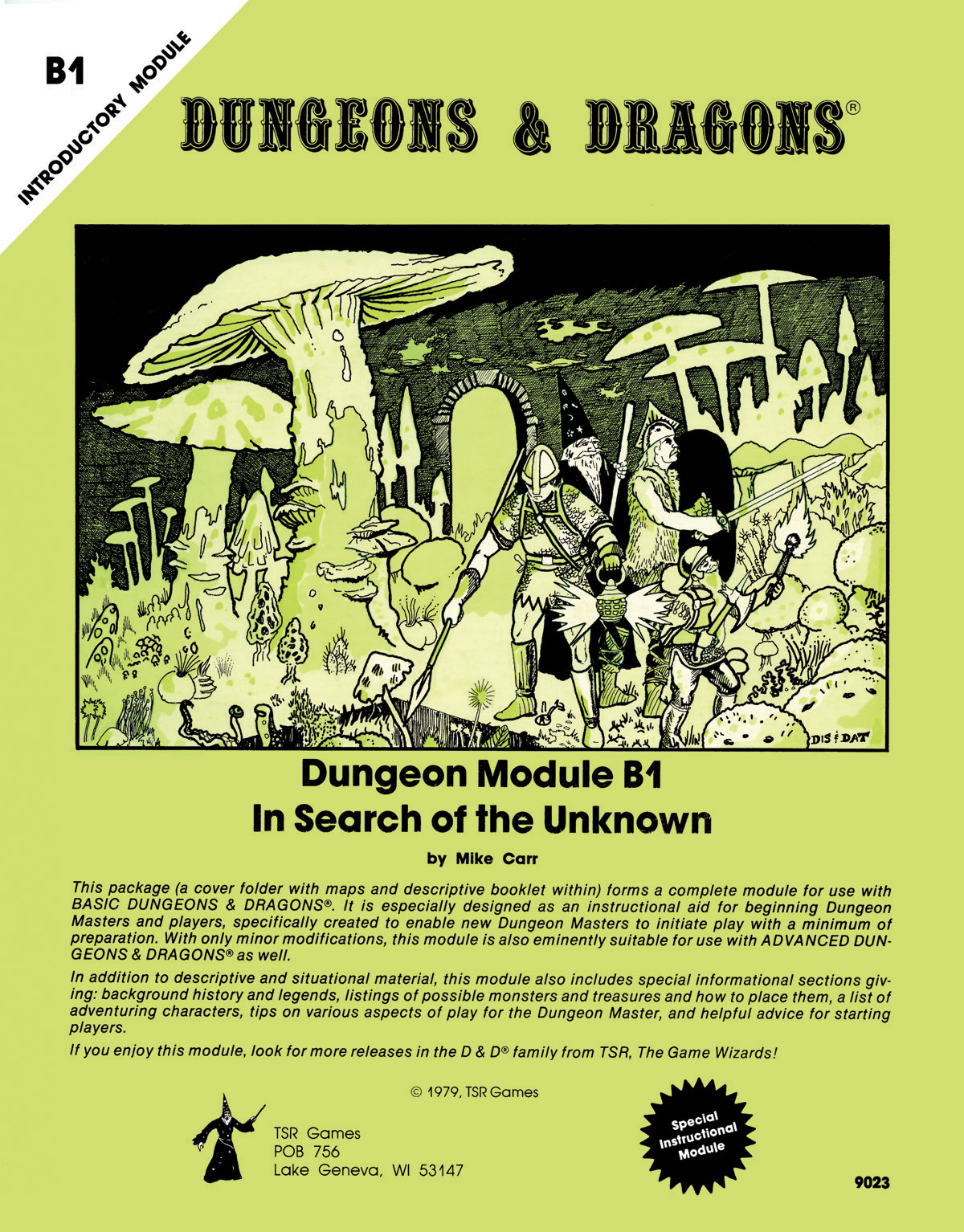 Over the course of our research (and after interviewing several early TSR employees), we pieced together what we think is the history behind this piece. The original David Trampier version of this cover was later published as an interior illustration in Polyhedron #5. How did the composite DIS-DAT version appear on the cover to B1? We’ll discuss the entire story in Into the Borderlands. And, as many of you know, the cover to B1 subsequently evolved to a color painting by Darlene, which is what most of us are familiar with. Into the Borderlands features complete scans of the second and sixth printings of B1. 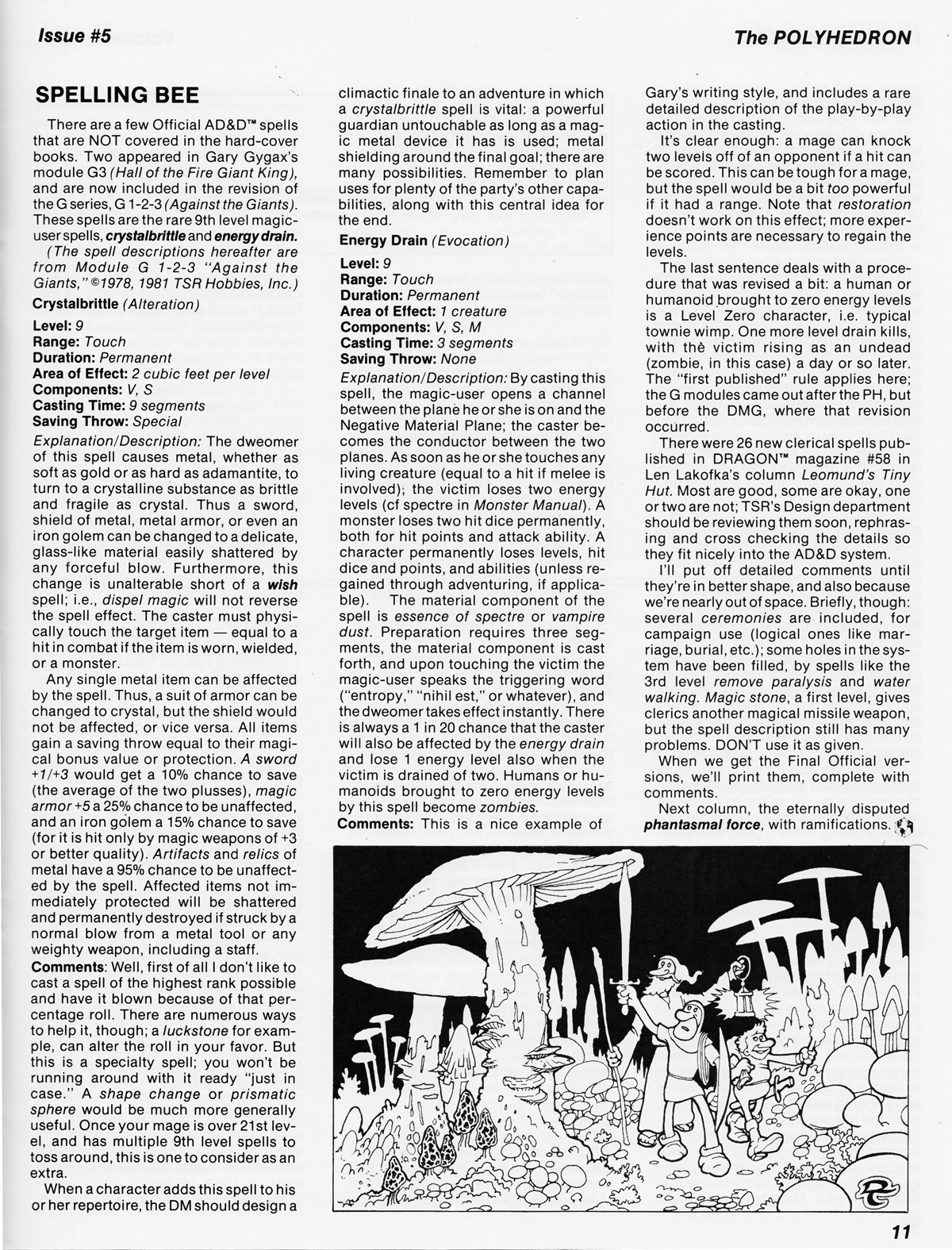 As you probably remember, B1 was unique among early TSR modules in that its encounter areas were not fully detailed. The adventure was designed to train new dungeon masters, and they were left to fill out the encounters on their own. While this was appealing to some dungeon masters, it was a deterrent to others. In the pages of Into the Borderlands, we provide three completed B1 monster/treasure assortments, written by Chris Doyle, Michael Curtis, and Tim Wadzinski. If you do intend to play B1, you can now choose from one of these encounter lists or draft your own. 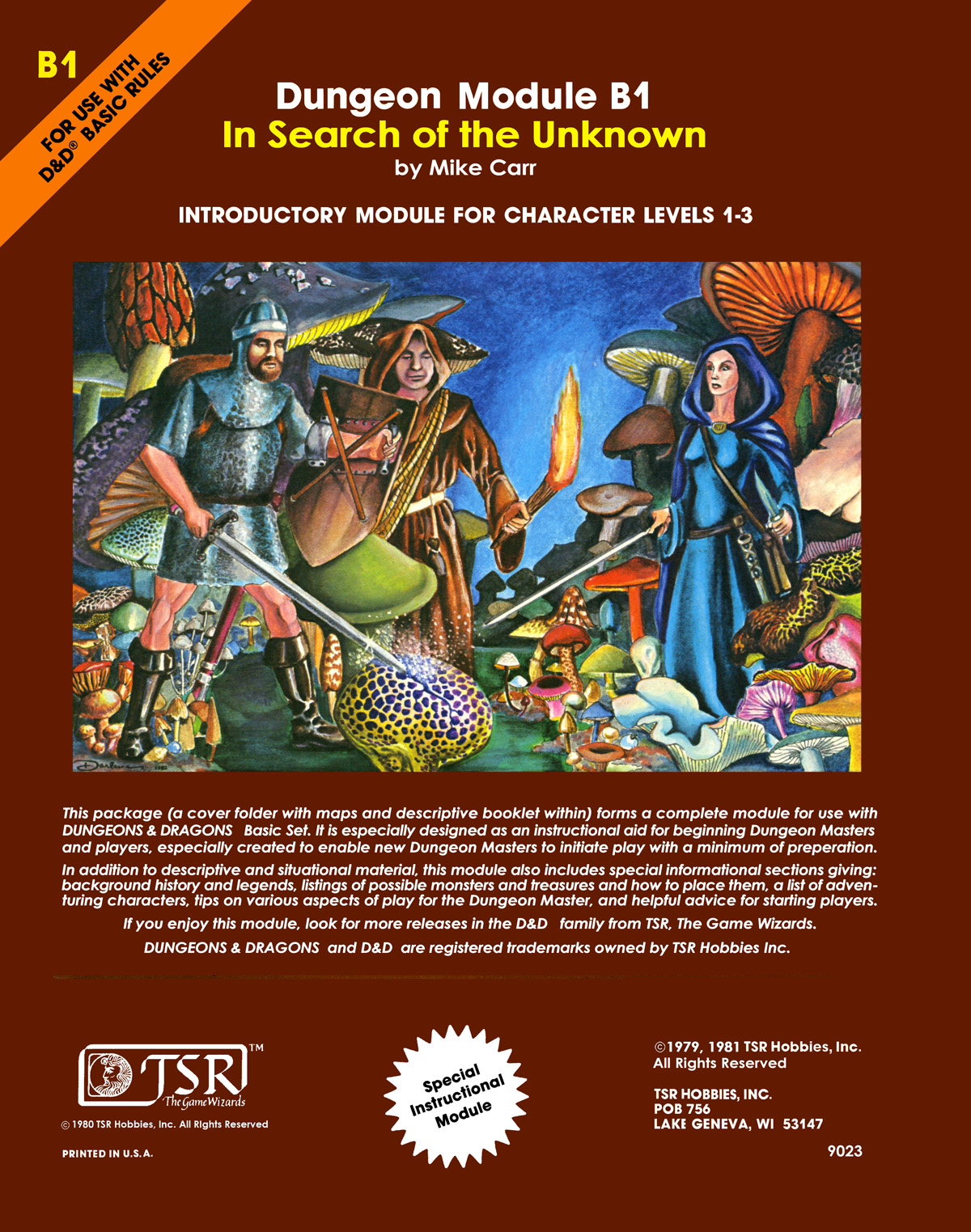 A significant part of the page count for Into the Borderlands – nearly 200 pages as of this update – is composed of the 5E conversions of these adventures. Author Chris Doyle and editor Tim Wadzinski have converted the original material as faithfully as possible to ensure a play experience that is just like what you remember. Of course, stat blocks in 5E are longer than in 1E, and the game has evolved considerably in how much detail is provided for each encounter, so the 5E conversions are longer than the 1E editions. (Plus, of course, virtually nothing can compete with Gygax’s succinct prose!)

In the course of writing the 5E conversions, we have paid exquisite attention to all the hints and teasers provided by the original authors. In Mike Carr’s writing for B1, for example, he notes, “A single tower was constructed above ground for lookout purposes, even though there was little to see other than a hilly forested wilderness for miles around.” This tower receives no additional description in the module. As part of Into the Borderlands, we have at long last detailed this encounter area with new material to expand the B1 play experience. B2 receives a similar treatment, with some new material provided to expand the encounters. The new material is separated into its own chapters and is clearly marked as new material, so gamers can decide whether to play the 5E versions “exactly as Carr and Gygax intended” or with this new material.

The last section of the book consists of commentary and memories. Luke Gygax and Frank Mentzer both provide introductions with their own memories of being part of these adventures – both the playing of them and the publication of them. Mike Carr agreed to sit for an extensive interview with Jim Wampler regarding Mike’s experiences at the nascent TSR and the process of authoring B1. We all started our D&D careers playing either B1 or B2, so Harley Stroh and Brendan LaSalle provide their own memories of their early D&D campaigns that evolved from these adventures. Finally, Alex Kammer provides perspective as a collector. After all, B2 did go through nine printings, and they are all different from each other, so Alex provides his perspective on what it’s like to collect all nine.

Into the Borderlands is written and edited, and is currently in layout. All art is complete. We have commissioned dozens of new illustrations to provide art for the 5E conversions, as well as modern-style maps to accompany the 5E conversions. All of this of course appears side-by-side with the 1E editions. With all content combined, we anticipate the final hardcover to be somewhere in the 300-page range. It is turning out to be a longer book than we anticipated, due to many good reasons. We couldn’t help but discuss the mysterious history of the B1 cover art – and it certainly seems like a good idea to provide 5E conversions for the “Lonely Tower” alluded to in the original edition of B1 – and so on. There is so much great material to work with! By the time fans get their hands on this volume we believe they will be very, very satisfied. We hope to have it released by late 2017.