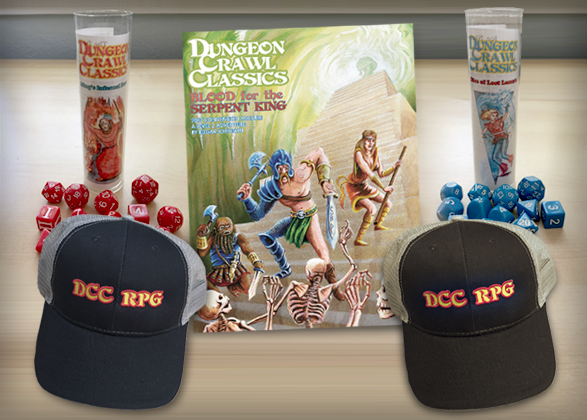 The countdown to Gen Con 2017 is almost finished, which means that it is almost time for the show to begin! We still have some new convention-only product to announce, too!

We invite you to wear your DCC pride with honor, right on the top of your head. To help with this, we have two limited-run DCC RPG Trucker Hats that will be showing up at the convention. And you have your choice of your favorite color to choose from as well…so long as your favorite color is either navy or brown. Both hats have the DCC logo emblazoned upon them, and will proudly proclaim that you are devoid of character-death-fear because you love the challenge of Dungeon Crawl Classics! 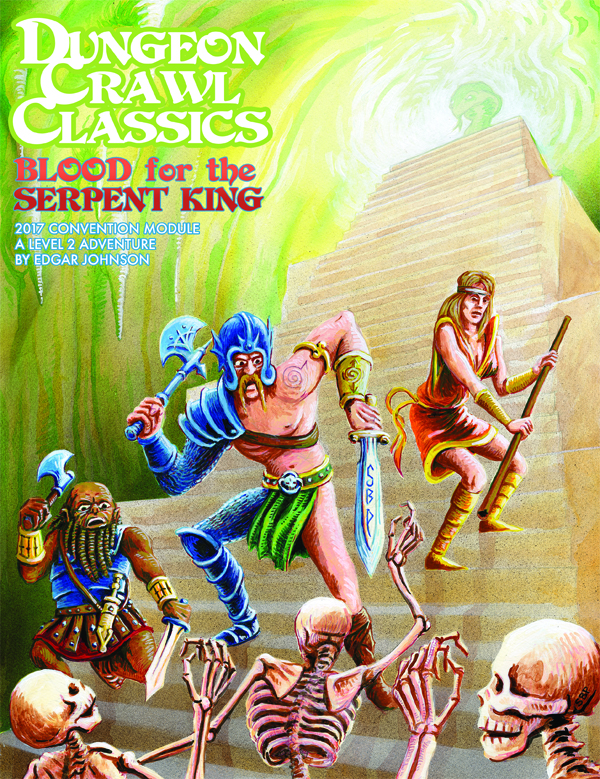 There are also a few remaining copies DCC 2017 Convention Module: Blood for the Serpent King available at the show. Deep in the jungles, amidst the ruins of an unimaginably ancient civilization, dangers lurk: feral tribes and predatory beasts, and darker things that civilized folk prefer to forget. You’ve heard rumors of the treasure hordes of one of those great evils: the legendary serpent-man, Xiuhcoatl. They say that Xiucoatl is worshipped by feral tribes of degenerate serpent-men who call him The Emerald Cobra. Do you dare face their rites of blood and sacrifice? DCC 2017 Convention Module: Blood for the Serpent King is written by Edgar Johnson, with cover art by Stefan Poag.

And we aren’t done. There is still one more day of our New Release announcements. Check back tomorrow for the latest!