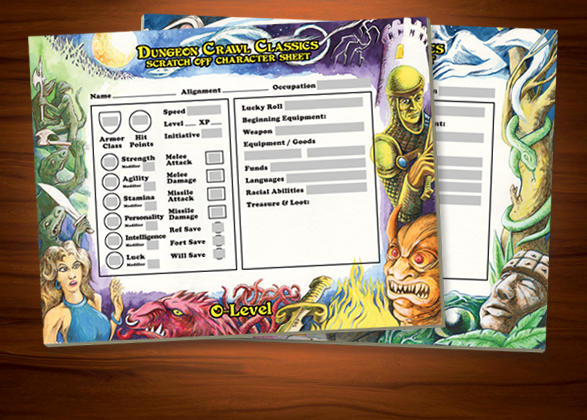 Do you hate the hassle of rolling up a new character? Have you got a coin or maybe even a fingernail? Then we can help you to create your new DCC character!

The Dungeon Crawl Classics Scratch Off Character Sheet Kickstarter is now live! This is your chance to get some 0-level characters pre-generated and ready to run through a funnel with only the effort of picking one up and scratching off the details! And with the system we are using, there are 50,000 different characters being generated, so the odds of getting the same one twice are…well, about 50,000 to 1. Each character presented utilizes the standard 0-level character creation tables in the DCC RPG core rulebook. Each pack will contain a minimum of 10 pre-generated sheets, but that number can go up based on how many are ordered! Check out the Kickstarter for details!

This is a short Kickstarter, and will only be around for less than three weeks, so don’t delay!