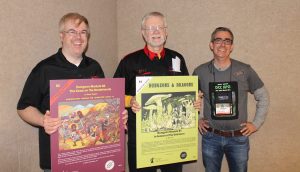 At Gary Con, Goodman Games announced a partnership with Wizards of the Coast to reprint classic D&D adventure modules while also updating them to Dungeons & Dragons Fifth Edition stats. This is a huge undertaking, where we must be very careful to preserve the integrity of the original adventure while also making sure it plays well under 5E rules. In this update on the project, we’ve asked lead designer Chris Doyle and lead editor Tim Wadzinski about what they’ve been working on.

First we speak with Chris Doyle, who converted the adventures to 5E, and also wrote the new 5E encounters to flesh them out.

Chris, what has been the most exciting aspect of converting these classic modules to 5E?

It was a great opportunity to re-read all of the versions of these classic modules.  I even read the original Keep on the Borderlands novel. I spent weeks just reading and researching, and making cryptic notes about the modules. Then I used each for inspiration in some of the added material. There are lots of Easter eggs in there with some real obscure references. But the most exciting part was getting to playtest B1 with my best friend, my wife and my 13-year-old son (his first foray at role-playing games). That is the best part about role-playing games. The memories forged around a game table with friends and family.

What are some of the design challenges you’ve faced in converting them?

The amulet of protection from good. I’ll let Tim expand on that one.

The challenge was updating the modules to the latest edition of D&D, yet keep them consistent with the late ’70s feel. This was most difficult when designing additional material. As for B2, I was amazed at how much detail Mr. Gygax could put into an encounter with so few words. There is nothing wasted in his prose. The read-aloud, room description, monster stats, treasure, and sometimes even tactics were all there in a few sentences total. At times it was a challenge deconstructing some encounters for updating to 5E formatting while retaining the Gygaxian feel of the original.

I understand you had to make some minor changes to some of the classic maps in order to bring them into compliance with 5E rules. Did that trigger any emotional response?

Most of the map changes were required due to the additional material, or adding cues to aid the DM.

I’m a very unemotional person, and at first I viewed this as any other writing project. That is, until I read Frank Mentzer’s Intro. I remember staring at the computer as it sunk in: the importance of B1 and B2 in the history of D&D. And I was tasked with converting it to the latest edition. I didn’t do any more writing that night. Instead I pondered the importance of this project, and the legacy of those two adventure modules. I’m truly honored to be part of this project, and now be a small part of that gaming legacy. 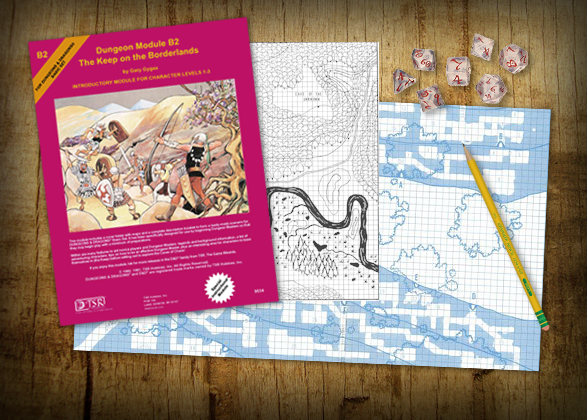 Did you have a chance to expand on the original work with new encounters? What are some examples of what you added?

Yes, by far that was the best part. In B1, the introduction mentioned a lonely tower on the rocky outcropping, but it was never detailed in the original module. Well, it exists now, and provides another route into and out of the upper level. There also might or might not be a certain archmage hidden in a sanctuary. In B2, I was able to add additional wilderness encounter areas, several of which tie into specific encounter areas in both B1 and B2. For example, the very last encounter in B2 features a captured medusa. It only seemed fitting to place her lair in the wilderness to have a place for her to stash those important elixirs should the PCs get a glimpse of her eyes.

Tim Wadzinski is the lead editor on this project. He has previously edited our Fifth Edition Fantasy modules and is a stickler for editorial perfection. Tim, I know that editing conversions can sometimes bring up some esoteric style guide concerns – things the true experts have to get right. What are some of the most subtle nuances you’ve had to contend with?

Stat blocks! There’s always something to do with stat blocks. In B2, due to the many versions of the standard “guard” in the Keep, there has been a lot of cross-checking between the manuscripts and the various rulebooks. Sometimes notations must be made in the text, and we’re trying to strike that perfect balance of having everything accurate and at the DM’s fingertips, but without making too many fiddly notes.

And as Chris mentioned earlier, converting the amulet of protection from good was a little tricky. The spell behind that item certainly has changed a bit over the years. We had to come up with something for this project that aligned (no pun intended) with the spirit of the original magical item. We had a great, collaborative back-and-forth during one of our status meetings and I think we hit the mark.

What has been your favorite part of this project so far?

First and foremost, just being involved is amazing. I still have my original copies of B1 and B2, all beat up and annotated in pencil, and seeing them reborn now will be fantastic. But more specifically, I love how Chris has maintained the vibe of the originals in his expanded content. As I read through these manuscripts I appreciate and admire how the various pieces seamlessly fit together.