New Releases Only Available at Conventions! 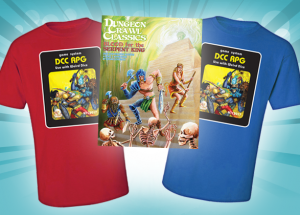 Do you feel like going to a convention is a special occasion? We agree! That’s why we are bringing you not one, but TWO convention-exclusive items this summer!

First up is the new Atari-inspired designed t-shirt, available in either red or blue. This is the newest iteration of the shirt we offered at GaryCon earlier this year. You don’t want to be the one looking at your friend and wondering why you aren’t as cool as they are, right? Well, then get your shirt on!

Also available at cons this season is the DCC 2017 Convention Module: Blood for the Serpent King. Deep in the jungles, amidst the ruins of an unimaginably ancient civilization, dangers lurk: feral tribes and predatory beasts, and darker things that civilized folk prefer to forget. You’ve heard rumors of the treasure hordes of one of those great evils: the legendary serpent-man, Xiuhcoatl. They say that Xiucoatl is worshipped by feral tribes of degenerate serpent-men who call him The Emerald Cobra. Do you dare face their rites of blood and sacrifice? DCC 2017 Convention Module: Blood for the Serpent King is written by Edgar Johnson, with cover art by Stefan Poag.

Stop by Momocon, Origins, or NTRPG to pick up your exclusive items! Check out our complete convention schedule to see cons later in the season where you’ll be able to get a copy! Not attending a con? Check our web site later in the year and we may have leftovers available for sale!