At Goodman Games we recognize the importance of Appendix N in the history of D&D and DCC. May 21 marks the 114th anniversary of the birth of Manly Wade Wellman, a unique contributor to Appendix N. Here is some more information on this important writer. 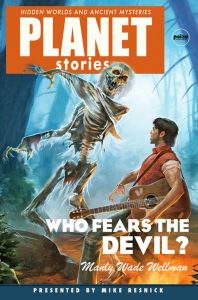 Manly Wade Wellman arrived in this world on May 21st, 1903, born literally an ocean away from the place he’d be forever associated with in his later life. Young Manly’s playground was the land of Portuguese West Africa (now Angola), where his father was stationed as a medical officer. It was undoubtedly here, in a land far removed from the staid world of 20th century America, that the seeds of Manly’s imagination found their first fertile ground. Wellman would grow to become an accomplished writer, penning stories in the genres of science fiction, fantasy, occult detective stories, prehistoric adventure, and horror during a career lasting almost 75 years.

While all of Wellman’s oeuvre is worth reading, it is his Silver John stories that most impacted the world of fantasy role-playing. Wellman is one of the names on Gygax’s Appendix N roster of influential authors. Although no specific title is listed alongside his name, it’s been suggested that the character of Silver John influenced the bard class in D&D—a wandering troubadour who uses song, magic, and knowledge to defeat supernatural menaces. Stripped of the pseudo-medieval trappings of D&D, the bard and Silver John become almost indistinguishable from one another. 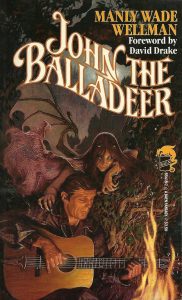 The Silver John stories influenced the world of Dungeon Crawl Classics in a much different manner, however. Rather than inspire a single character class, Wellman’s tales of the witch-haunted hills and hollows of the Appalachians served as the germ for DCC #83 The Chained Coffin. That adventure is set in the fantastic region of the Shudder Mountains, a realm inhabited by goodly-hearted yet superstitious folk who share their mountain home with witches, devils, and secrets harkening back to a time before time. Gamers looking for adventures set somewhere other than the standard sword & sorcery inspired settings of fantasy role-playing will find a familiar yet eerily different world in the Shudder Mountains. The Shudders are a place where Manly Wade Wellman would have felt right at home and we here at Goodman Games raise a glass of good ol’ blockade whiskey on this 114th anniversary of his birth.

For more information and plenty of Appalachian-style adventures for your Dungeon Crawl Classics campaign, be sure to check out DCC #83: The Chained Coffin, DCC #83.1: Tales from the Shudder Mountains, and DCC #83.2: Death Among the Pines. 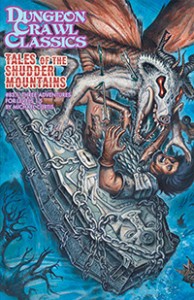 DCC #83.1: Tales of the Shudder Mountains