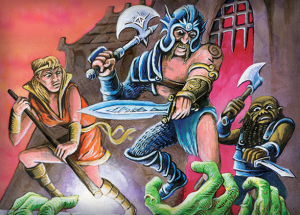 The dead black heart of Thakulon calls to you and your Dungeon Crawl Classic players!

The codification of magic originated with the Seven Immortal Sorcerers of Lemuria. Chief among their order was Thakulon. Fearing his might, yet unable to slay the undying black magician, the Gods of Creation dismembered the fell sorcerer and scattered his body to the Nine Worlds. The sorcerer’s heart was placed within a prison-tomb of three concentric vaults. Each of the three pantheons – Neutrality, Law, and Chaos – took it upon themselves to craft one level of the tomb, each seeking to outdo the others. For deep within the tomb, the Heart of Thakulon still yearns for its freedom.

But you’re no hero. You’re an adventurer: a reaver, a cutpurse, a heathen-slayer, a tight-lipped warlock guarding long-dead secrets. You seek gold and glory, and if a few undying sorcerers are freed in the seeking – well, you’ll probably never live to tell the tale.

Returning to Gen Con after a five-year absence: The DCC team tournament! For many years our tournament were the stuff of legends, and now they’re back under DCC RPG rules! This year’s elimination-style tournament will take place over three rounds with the first round games scheduled for Thursday and Friday. Beginning with Gen Con event registration on May 28th, your 5-player team will be able to register for the first round, with a single person being able to purchase up to 5 tickets to reserve spots for all their teammates. The top three scoring teams from the first round will advance to the second round on Saturday, and the top two teams from round two will advance to the finals held on Sunday morning. Scoring information will be posted at both the Goodman Games web site and a leaderboard at the booth for players to check to see which teams advance. Always keep an eye on our Tournaments page for the latest tourney information!

Winners of this year’s tournament will have their names immortalized for all to admire and envy. Are you and your handpicked team of reavers up to the challenge? Prepare your team and get ready for Gen Con event registration to open!