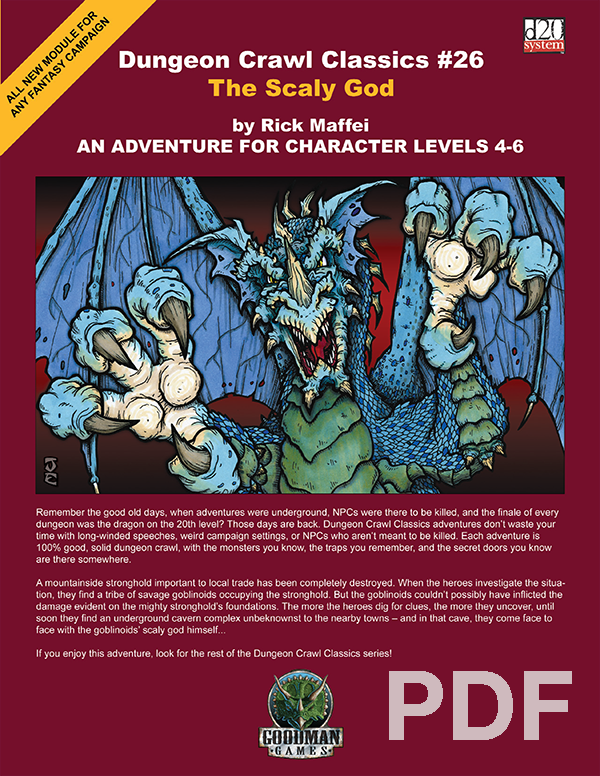 Rick Maffei isn’t someone who is probably known to a lot of current DCC RPG fans, but he was the author of many excellent Goodman Games products in the days of 3E and 4E. He wrote for the Dungeon Crawl Classics line, the Age of Cthulhu line, and had an article in the original version of How to Write Adventure Modules That Don’t Suck! So even if you haven’t heard of him, know that he’s the real deal. Since Rick has new products coming out soon for Goodman Games (surprise!), this installment of Forgotten Treasure takes at look at the first module of his we published: DCC #26: The Scaly God.

The Scaly God brings adventurers to investigate a damaged keep. They find the keep inhabited by a tribe of troglodytes, but these creatures could not possibly have caused the massive destruction around the castle. Further exploration leads the party into previously unknown underground caverns where they face numerous strange subterranean threats and eventually into combat with the “god” of the trogs: a blue dragon named Rathulagon.

Rick’s writing is compelling even when just reminiscing about his adventure, so let’s just let him tell it in his own words:

“In many ways, The Scaly God was a love letter to the Gygax-penned modules of old, the ones I loved reading and re-reading. Gygax’s modules always had these little weird spots, tiny little mysteries and oddities tucked away for the players to discover amid the larger dungeon. One of my all-time favorites was Hall of the Fire Giant King, as well as the infamous Tomb of Horrors and Lost Caverns of Tsojcanth. They were majestic dungeons, other-worldly places in which the adventurers were utter intruders. I wanted very much to capture that feeling in Scaly God.

I’ve always loved troglodytes and the TSR module D1 Descent Into the Depths of the Earth was the second adventure module (after the Tomb of Horrors) that I ever read—when I was about 12-years-old—so including trogs and a cave system in my first book was a given. 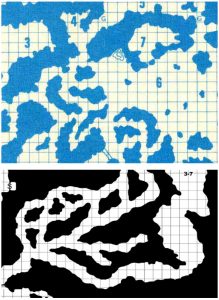 Comparing the twists and turns of the Hall of the Fire Giant King (above) with some underground passages found in The Scaly God (below).

In the second half of the adventure, I definitely channelled a lot of Tsojcanth. Likewise, I made a point of carefully studying the maps for Hall of the Fire Giant King, particularly the lower cave level, and I tried to create a series of caves that, while different in layout, strongly evoked that jagged, maze-like feel and not the simpler, circular-style cave maps that TSR employed a lot in the mid-1980s. I revised the cave maps many times. Jeremy Simmons, bless his heart, followed my final maps very faithfully and reproduced all my little jigs and jags and twists in the finished product.

Regarding the graphics, I loved the art that Doug Kovacs, Brad McDevitt, and the other talented artists did for the book. The heavy inking of Stefan Poag’s work brought to mind David Trampier’s (aka DAT) monster illustrations, which I always thought were some of the best TSR art—looking at those drawings was almost like looking at woodcut art rather than pen and ink works.

The little weird temple room on the lowest level was my little Easter Egg, a strong nod to the unsettling temple with the greasy walls that Gygax tucked away in Steading of the Hill Giant Chief. That temple was our first glimpse of the Elder Elemental Eye that later figured so strongly in Hall of the Fire Giant King and the Descent Into the Depths series. My god, Sothulth, was strongly influenced by the Elder Eye as well as the numerous H.P. Lovecraft stories I was reading at the time. As a DM, I delight in keeping my players on edge and making them nervous sometimes; the temple was meant to do just that.

The White Fang Keep half of the adventure was more of a self-challenge. Designing a keep from the ground up seemed like a real challenge, and it was. I managed to find several good books about keeps and castles and I had about 60+ real keep floorplans as reference material during the design phase. For those interested in such things, I highly recommend The Medieval Fortress by J.E. Kaufmann and H.W. Kaufmann.

As for my Big Bad, Rathulagon, I always had a soft spot for blue dragons. Red dragons get all the press, and black dragons have a real evil look, but I always felt that for sheer destruction a dragon that breathed lightning was the apex. Not long after Scaly God was released fellow Goodman Games author Adrian Pommier ran his group through Scaly God, and he related to me (with only a glee that two old-style DMs can share) how the adventures walked into Rathulagon’s lair standing in single file and were promptly TPKed by a well-placed lightning bolt.

Reflecting back on Scaly God, it’s still my favorite book of the many I’ve written for Goodman Games. As my first GG book, I really wanted to write something that evoked that TSR classic spirit, and I’m happy with the way it turned out. Like all my books, it was written by my envisioning movie-like scenes in my head and writing them down. I only hope the players running the adventure enjoy it as much as I enjoyed writing it!”

You can purchase DCC #26: The Scaly God and all of Rick’s other publications in our online store, and be on the lookout for new Goodman Games products authored by him in the not-too-distant future! 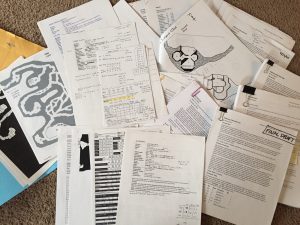 Notes, maps, and early drafts of The Scaly God.