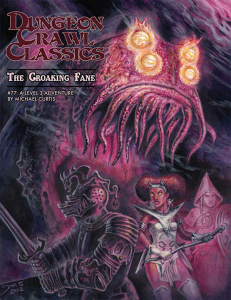 If demonic amphibians are your thing (and you know they are), then DCC #77: The Croaking Fane is a must have adventure for your collection. In this level 3 module by Michael Curtis, the followers of the amphibian god Schaphigroadaz have mysteriously vanished, leaving their temples in the swamp empty. The adventurers travel through muck and mire to explore one such temple, determined to see what treasures the cultists have left behind. Though there are no priests left, it does not mean the fane is unprotected…

The first thing you need to know about this adventure is that “fane” is a real word. It’s a late Middle English word meaning a temple or shrine. The second thing you need to know is that if detailed descriptions of toads, snakes, and other creepy-crawly swamp creatures freak you out, you may want to skip this one. The Croaking Fane has some of the best boxed text in the entire DCC RPG line.

“Without giving away too much, the toad cavern is my absolute favorite,” Michael says. “I’m not even squeamish when it comes to animals like snakes, frogs, lizard, etc., but this one gives me the willies when I picture it in my head. I think I would be physically nauseated if I ever saw that room for myself. I’m also pretty proud of the boxed text description for that encounter. After I’ve made certain that the written descriptions in an adventure work during playtests, I seldom bother with reading them verbatim whenever I run the adventure again. This is one piece of boxed text I always recite, however, because I think it’s the perfect mix of Gygaxian purple prose and Curtis’ sensibilities.” 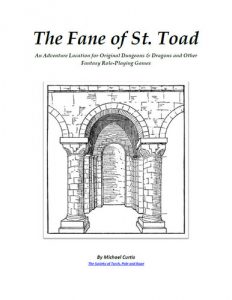 The cover of The Fane of St. Toad

“Clark Ashton Smith’s stories had an influence on The Croaking Fane,” explains Michael. “In fact, one of the encounters in the adventure owes a big debt to Smith’s ‘The Tale of Satampra Zeiros‘. I won’t say more to avoid ruining the surprise. Lastly, you can’t go far into C.A.S. country without walking with H.P. Lovecraft for a while. There’s definitely some Lovecraftian DNA in there too.”

As this was Michael’s third adventure with Goodman Games, he was mostly trusted to write a good adventure without direct supervision. Joseph Goodman’s only input came at the end when he requested a few tweaks. “The biggest one I remember,” Michael says, “had to do with one of the rooms in the Fane where the cultists would entertain their batrachian allies. In the original draft, the description of that room’s décor was a little more risqué than what made it to the page. I toned it down a bit for adolescent readers, but I think adults can read through the lines enough to picture the room as originally intended.”

[They absolutely can. I ran a playtest of it at a convention, and the looks on the faces of the players when comprehension set in were priceless! I hadn’t read the room descriptions very closely when prepping, so the look on my face was probably equally entertaining.- Media Minion]

Michael has some good playtest stories from this adventure as well. “During a playtest at North Texas RPG Con, I witnessed the greatest use of the clerical command spell I’ve ever seen. The party was fighting one of the inhabitants of the Fane and a PC was swallowed whole. The cleric, without missing a beat, commanded the creature to ‘Vomit!’ Suffice to say, the swallowed character came right back up, a little stinky, but ready to get back into the fray.”

Despite being the author, Michael admits he has no idea how to pronounce “Bobugbubilz” and “Schaphigroadaz” either: “Quickly and indistinctly would be my best guess.”

The Croaking Fane is available in the original color cover, the sketch cover, and as a PDF. 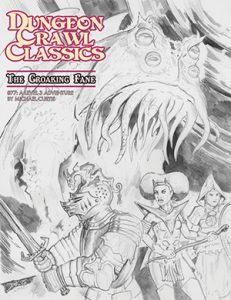