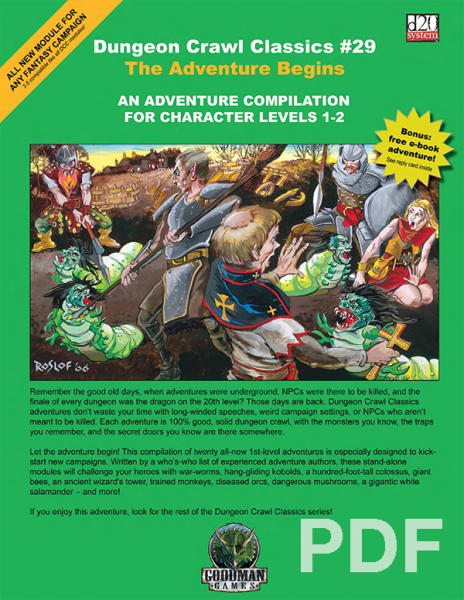 DCC #29: The Adventure Begins was the first hardcover DCC product.

Back in the days of 3.5E Dungeon Crawl Classics, Joseph Goodman decided he wanted to publish a tome of 1st level adventures. That idea turned into the very first hardcover DCC product- DCC #29: The Adventure Begins. Aside from just being a fantastic collection of low-level excitement, The Adventure Begins has quite a few connections to the DCC RPG of today. If you followed DCC back in the pre-DCC RPG days, you’ll recognize a lot of the names involved in this project: Adrian Pommier, Phillip Larwood, Andrew Hind, Michael Ferguson, Jeff LaSala, and others. But never fear, even those who are hard core DCC RPG fans can find a lot to like in this book: adventures by Harley Stroh, Brendan LaSalle, and Dieter Zimmerman; and art by Stefan Poag, Brad McDevitt, Doug Kovacs, and Jim Roslof.

DCC RPG collectors will probably recognize the art on the cover as the same Jim Roslof cover from DCC #76.5: Well of the Worm. That’s because Well of the Worm was originally an adventure in this book! According to its author Harley Stroh, “The adventure was the first of several adventures written after REH’s classic, Worms of the Earth. The setting was inspired by the war-torn landscape featured in Kurosawa’s epics – muddy earth saturated with blood and torn from the stamp of hob-nailed boots and the hooves of warhorses.” Doug Kovacs did the interior art for the adventure “bringing two of my favorite artists together,” says Harley, “thoroughly outclassing the adventure’s author.” 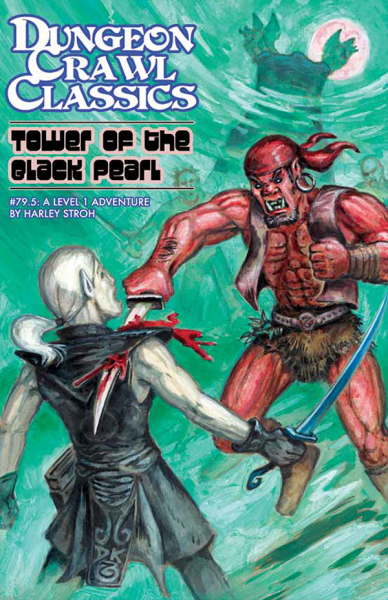 DCC #79.5: Tower of the Black Pearl with a cover by Doug Kovacs

Harley has a second adventure in DCC #29 that DCC RPG fans will also know: “Tower of the Black Pearl”. Tower of the Black Pearl is notable for the first appearance of the sorcerer who would one day be known as Sezrekan. In the original adventure, he spells his name Sezrakan. “He goes through a couple spelling changes between 3.5 and DCC RPG,” says Harley, “It’s a demonology thing. I had no plans for Sez at the time, but it brings me no end of delight to see that he lives on in gaming tables around the world.”

Tower sports an optional ending where every good-aligned PC (or NPC) hero in the world is slain as the tower’s magic comes to a tragic end. Harley loves it. “This sort of world-shattering event is usually saved for RPG novels, or barring that, 20th level adventures. That Goodman Games was willing to let it be written into a first-level adventure certainly presaged the DCC RPG.” The adventure has a couple tributes that may not be obvious. The pirate captain Savage Quenn is named for Jeffrey Quinn, the author of the very first DCC adventure Idylls of the Rat King. Quenn’s rapier is named Whisker, which is a nod to Gray Mouser’s blades Scalpel and Cat’s Claw. Tower of the Black Pearl was converted to DCC RPG as DCC #79.5: Tower of the Black Pearl.

Brendan LaSalle’s contribution to The Adventure Begins has not yet been converted to DCC RPG, but it’s still a fun time! “When Kobolds Fly” pits the adventurers against a gang of hang-gliding kobolds. The original title for the adventure was “The Kobolds From Hell”, but Joseph Goodman renamed it. “I am very pleased with the change,” Brendan admits. “I think I would feel ill-used if I bought an adventure called ‘The Kobolds From Hell’ and found the titular humanoids had no actual infernal background.” 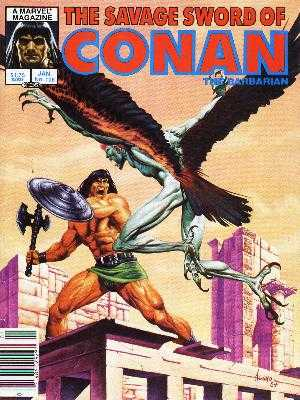 Savage Sword of Conan #108: Claws of the Osprey

The main inspiration for this adventure was a story from an issue of Savage Sword of Conan magazine, “Claws of the Osprey”. In it, a genius inventor betrays his king and is stranded on a high plateau by Conan, only to build himself a set of working wing out of the body of a giant osprey and return for his revenge. “I love Savage Sword of Conan,” says Brendan, “and when I moved to Houston in 1983 and started playing D&D with kids on my block I adapted many plots, settings, and monsters from its wonderfully-drawn pages for my ongoing campaign. ‘When Kobolds Fly’ is a little tribute to those days when I was a fledgling GM playing with a fun little group in Texas. Its a lot like the challenges I would have sent after that crew, who I played with until I moved to Georgia in 1985.”

The Adventure Begins also contains Dieter Zimmerman’s first published adventure. “The Plague Wight’s Revenge” infects the characters with horrible diseases, and has them face off against monsters no 1st level characters should rightfully be able to defeat: minotaurs. “Disease can be a scary, scary threat to characters who can’t cast Cure Disease at will,” Dieter says. “They have to wonder how bad the untreated disease will get. Will it kill them? Will its effects be permanent?”

If anyone wonders how easy it is to convert low level 3.5E adventures to DCC RPG, it’s pretty easy. Dieter tells a story of a group he knows: “A friend of mine ran ‘Plague Wight’ for his DCC RPG group, converting it on the fly. The funny part is, even though I’ve known him for years, he didn’t realize until afterwards that he ran an adventure I wrote!” 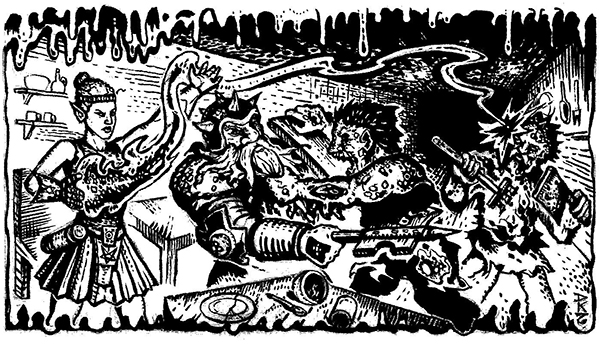 One of Doug Kovacs’ illustrations for “The Dripping Temple” by Rob Manning.