Forgotten Treasure: Crypt of the Devil-Lich

Forgotten Treasure: Crypt of the Devil-Lich 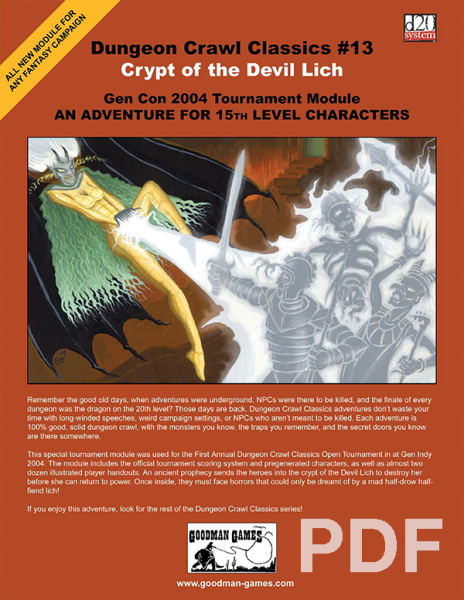 DCC #13: Crypt of the Devil-Lich, the first DCC tournament module

Before the Hypercube of Myt, before The Seven Pits of Sezrekan, before DCC RPG even existed as its own game, the Dungeon Crawl Classics tournament was a much-anticipated event at every Gen Con. Using all their cunning and conserving resources as much as possible, could your characters survive the perils of whatever killer dungeon the Goodman Games stable of writers cooked up that year? And could they do it better than all the other teams to win the tournament trophies?

The question was first posed in 2004 at the first DCC tournament. The adventure was a 96-page killer dungeon designed specifically for the tourney that was later published as DCC #13: Crypt of the Devil Lich. DCC author and former RPGA tourney organizer Chris Doyle met with Joseph Goodman at an Irish pub, and the idea was born.

“Joe really wanted to run an old school Dungeon Crawl Classics Team Tourney at GenCon in 2004,” says Chris. “We discussed the classic meat-grinder Tomb of Horrors, and how cool it would be to assemble an assortment of proven game designers to each design a few awesome encounters for a deadly dungeon. The project really appealed to me, and a few hours later we had a loose framework in place for The Crypt of the Devil-Lich. Joe would assemble the writers, and I would serve as the developer, and tourney organizer at GenCon in August, 2004.”

In addition to Chris and Joseph, the staff of writers included Mike Ferguson, Andrew Hind, Jason Little, Adrian Pommier, Jeffrey Quinn, F. Wesley Schneider, Andrew M. Smith, and Chris’ wife Lisa, who wanted in on the action when she heard about the project. Following a review of the concepts provided by the authors, Chris selected 1 to 3 from each while he got to work on the back-story and designing the Devil-Lich and the pre-generated PCs. Chris says, “A few weeks later, I had all of the encounters and room maps. This was the best part: taking 18 encounters from seven creative minds and assembling them into three challenging dungeon levels. I designed three more encounters (plus a few hallways), and then laid all of the maps out on my basement floor to visualize the dungeon levels. For days I arranged and re-arranged, and tweaked the encounters until I was satisfied. Then I designed a few more encounters to round out the levels, and placed the pieces of the Devil-Lich’s phylactery throughout the three levels. Finally, I weaved it altogether into a coherent adventure.”

A fury of playtesting followed. Many of the encounters had to be tweaked, some several times, because they were not lethal enough! “That is why many of the monsters are not standard and required templates,” says Chris. “It is really difficult to kill 15th level 3E characters!” Some of Joseph’s playtest stories can be found in the Publisher’s Note at the beginning of the module.

The tournament ended up being quite a success. The Josh O’Connor Experiment (starring original members Josh O’Connor-Rose, Mark Karay, Juan Burriel, Michael Maenza, Dustin Short, and Matthew Filla, and last-round substitutes Andrew Brogan and Tom Caudron) was the first place team. Chris recalls getting quite a bit of negative feedback about how the pre-generated characters were not min/maxed. “The wizard has ranks in acrobatics!” Chris says. “Personally, I dislike min/maxed PCs, and much prefer interesting PC concepts with flaws. That was the intent. Few realize that all the PCs save the monk were based on 1st edition PCs from one of my home campaigns in the late 80’s. 1E PCs don’t translate very well to 3E, but the concept was that is part of the challenge, and despite the griping at GenCon, it worked.” Joseph’s thoughts on the tournament can be read in this thread on our forums.

Chris’ favorite part of running the tournament came at the very last table. “A 15th level monk is damn near impossible to kill in 3E,” he says, “but I did manage it at the final table at GenCon. The PCs found the mysterious potions in the Eldritch Lab. Convinced the potions were crucial to success in defeating the Devil-Lich and her minions, the monk (who has diamond body-immunity to poison) boldly drank the potion while being grappled with the mummy dragon in the penultimate encounter. The elixir was a potion of lich creation, and if consumed kills the target with no save. Monk dead, and the dragon disposed of the lifeless body into the well of many worlds (‘nothing but net, from way down town!’). That would be -450 tourney points in 30 seconds, and although that wasn’t the difference between winning the tourney or losing, without the monk the PCs took much longer to defeat the mummy dragon.” 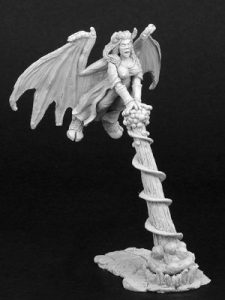 “Despite the dead monk, my final table had an absolute blast playing in the inaugural DCC Team Tourney. It was late Saturday night at GenCon, but they still wanted a shot at the final encounter and the Devil Lich herself. So once we hit our time limit for the tourney, we conducted the final scoring, sealed the results packet and turned them over. Then we continued to play for another hour! They never did finish off the Devil-Lich, but there were many smiles at the table and fond memories were forged at that GenCon in 2004. And what more could you ask for?”

(How about a miniature produced of your evil big bad? That would be pretty cool, right?)

In addition to just being a classic in the truest sense, the published version of Crypt of the Devil Lich includes more behind-the-scenes details about the first Dungeon Crawl Classics tournament: the rosters of every team that played, the tournament scoring rules, the pre-generated characters, photos from the tournament, and more! Plus there are other resources related to the adventure you can download for free: 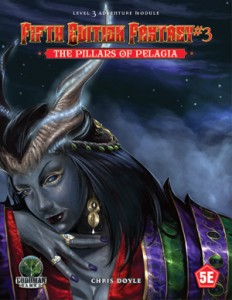 The Pillars of Pellagia: a prequel to Crypt of the Devil Lich!

Crypt of the Devil Lich laid the groundwork for an immensely popular tournament that always sold out at Gen Con, and it went on to win “Best Adventure” at the 2005 Pen & Paper Fan Awards. Other DMs ran the tournament at smaller conventions, and at one point there was even a DCC DM test to prove the mettle of tourney judges before unleashing them on unsuspecting teams. But there are still stories of Chalychia the devil lich to be told! A sequel, “Evil Reborn” by Jon Hook, appears in the Gen Con 2015 Program Guide. The recent Fifth Edition Fantasy adventure The Pillars of Pelagia by Chris Doyle is a prequel. Perhaps there’s even more yet to come…maybe even a 5E conversion of the original module…

Read these reviews of Crypt of the Devil Lich: