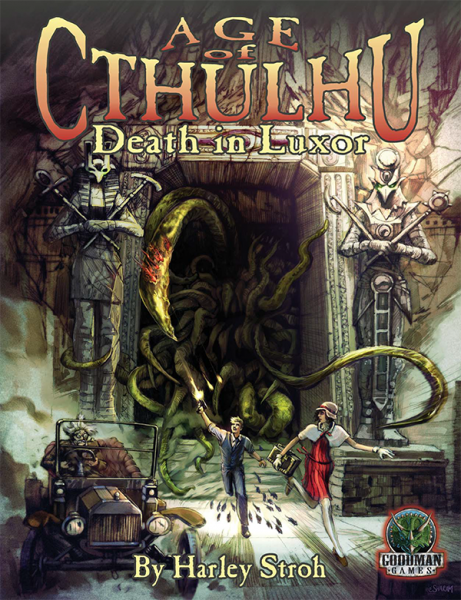 Age of Cthulhu I: Death in Luxor by Harley Stroh

Over the years of producing old school dungeon crawls, Joseph Goodman noticed that a lot of Dungeon Crawl Classics fans were also HP Lovecraft fans. It’s only natural, of course, given that Lovecraft is one of the authors in Appendix N, and he also features prominently in the history of D&D. It therefore seemed reasonable for Goodman Games to release products for the Call of Cthulhu game since they would also potentially appeal to DCC fans. And so the Age of Cthulhu line was born.

To kick off the line, Joseph tapped veteran DCC author Harley Stroh, and Death in Luxor is the result. The adventure takes 1920’s investigators to the dusty streets of Egypt, where they unearth an evil imprisoned ages ago by Ramses III. Death in Luxor sets the tone of the Age of Cthulhu products, which is a bit more “pulpy” than the typical Cthulhu game products. Though investigation still figures heavily into the plot, action is prevalent as well. The other hook to the Age of Cthulhu adventures is that they would take investigators all around the globe instead of just leaving them in small geographic locations.

Death in Luxor is set in the Egyptian city of Luxor not just because Egypt is a good Lovecraftian setting, but also because Harley had recently been immersed in Egyptian flavor. “I wrote the first Age of Cthulhu adventure,” he says, “after living in the third-floor apartment of an Egyptologist who worked seasonally at the Chicago House in Luxor (where our adventure begins). She would rent out her art studio as an apartment when she was overseas. It was furnished will all the eccentricities you’d could imagine, given the owner was a successful visual artist moonlighting as an expert in ancient Egyptian art: massive abstract paintings stacked along the walls; a full-sized mummy she had created for herself; cups, plates and utensils from around the world; towering palm plants; empty birdcages.”

“After a few seasons, she gave up the apartment, and I inherited much of the non-art (the guardian mummy moved on with Susan). I gave it up in turn, and took the last of the remaining artifacts and relics. A month later, the building and the entire block burned down, reduced to a skeleton of old bricks and collapsed beams. The new renter had fallen asleep while smoking a cigarette in bed. Most everything in that apartment appears in the adventure, even if only cursorily. The elderly immigrant couple struggling up the narrow stairs, the master framer on the second floor, the large-bellied balding man that collected all those dolls — they inhabit my Luxor, while something unknown and horrible lurks just outside.”

The adventure also draws heavily on Harley’s fascination with early 1900’s occultism, in this case specifically Madame Blavatsky and her Theosophists. They are cast in Death in Luxor as a world-spanning organization bent on securing the secrets of the Old Ones, and their influence appears in other Harley-penned products as well. “Journey to the Center of Áereth is my latest attempt to draw from that same well,” Harley says. “An ambitious judge could draw a campaign line through Journey to the Center of Áereth, Music of the Spheres (coming soon), and Death in Luxor to create a campaign spanning three epochs and at least two game systems.”

One of Brad McDevitt’s illustrations from Death in Luxor.

One of the artists who answered the Lovecraftian call was Brad McDevitt, who has since become the artist associated with the Age of Cthulhu products. Brad has been a fan of Lovecraft for most of his life, and illustrating mythos stories was a dream job for him. “I actually discovered Lovecraft when I was maybe 14-15,” Brad explains, “via the inclusion of ‘The Outsider‘ in a high school fiction anthology, and have been hooked ever since. At least 35-36 years ago now. I did not discover the Call of Cthulhu game itself until a con-game in Toledo in the mid-80s. Joseph Goodman knew I was a huge Lovecraft geek, and it was just a logical choice at that point.” One of Brad’s most iconic pieces of Age of Cthulhu art was recently featured on a t-shirt!

Death in Luxor is available in print and in PDF. 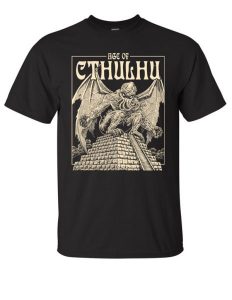